It was a dark January morning in the year 2000 when a brilliant fireball ripped across Canada’s northwestern wilderness. Moments later, the extraterrestrial interloper exploded over Tagish Lake, which straddles the Yukon-B.C. border. The burst deposited a myriad of fragments, many of which were retrieved from the lake’s frozen, snow-covered surface.

In the two decades since its spectacular arrival, the Tagish Lake meteorite has yielded a trove of information about the raw materials on hand when the planets formed. Now a new method of studying the meteorite has provided fresh insight into how such primordial lumps may have jump-started life on Earth.

Previous studies suggest the meteorite was once part of an asteroid that was warmed by the decay of radioactive elements and permeated with water, creating a distinctive mineral signature. The new findings show that it may also have been an ideal environment for generating certain kinds of amino acids – molecules that are now common to all living cells on Earth.

“These conditions open the door for microbial life to form as early as 4.5 billion years ago,” said Kim Tait, a curator and meteorite expert at the Royal Ontario Museum who oversaw the work. Her team’s study was published in the Proceedings of the National Academy of Sciences on Monday.

Amino acids are used to build proteins. In the laboratory, their three-dimensional shapes show up in left- and right-handed forms, like matching gloves. But when it comes to living organisms, only left-handed amino acids occur.

In 2012, scientists discovered that the Tagish Lake meteorite contains amino acids with 40 per cent to 60 per cent more of the left-handed variety. Now Dr. Tait’s team appears to have explained that imbalance, a result that may also hint at how life on Earth came by its left-leaning chemistry.

“We’re not looking at the amino acids but the conditions that they could have formed in,” said Lee White, a postdoctoral researcher at the museum who is the lead author on the study.

For the study, Dr. White and his colleagues zeroed in on magnetite, a mineral that is abundant in the Tagish Lake meteorite. At scales less than one hundredth the width of a human hair, magnetite grains show up as tiny spheres that bunch together into raspberry-like structures called “framboids.”

Dr. White said the team’s focus was on the gaps between the spheres in the framboids – microscopic niches through which water once flowed. And to explore the gaps, the team turned to a device known as an atom probe, which uses pulses of laser light and a high-voltage electric field to tease out the lingering residue that the water left behind.

“What we end up with is an atom-by-atom 3-D model of the original material,” said Brian Langelier, a team member and researcher at the Canadian Centre for Electron Microscopy at McMaster University in Hamilton, where the experiment was conducted.

To the team’s surprise, they found that the gaps were chock full of sodium. That would be expected if the water flowing through the meteorite was highly alkaline (it may also have been salty, but that has not been confirmed). And water that is far from having a neutral PH also favours the production of left-handed amino acids.

If similar conditions were present throughout the early solar system, then Earth would have been well supplied with left-handed amino acids brought in by asteroids bombarding the planet’s surface. That, in turn, may have prodded life to emerge along a left-handed chemical path.

“I think what Tagish Lake is telling us is that there was an inherent bias very early in the solar system forming left-handed amino acids,” said Daniel Glavin, an astrobiologist with NASA’s Goddard Space Flight Centre in Greenbelt, Md.

Dr. Glavin, who was not involved in the analysis but who was one of the researchers behind the earlier work on amino acids, said that the atom probe results provide an interesting new piece of the meteorite’s story that helps makes sense of his earlier findings.

Both Dr. Tait and Dr. Glavin are participants in the mission undertaken by the OSIRIS-REx spacecraft, which is currently orbiting the asteroid 101955 Bennu, an object that looks to have a lot in common with the Tagish Lake meteorite. In August, the spacecraft will attempt to grab a sample from the asteroid’s surface. Canada is a partner in the mission and will receive a portion of the sample if the effort succeeds. Dr. Glavin said he will be keen to see if the asteroid sample also shows an excess of left-handed amino acids, but added that he is prepared to be surprised.

“Every single meteorite we analyze we see something different," he said. "I’m sure Bennu will be no exception.”

Meteorite hunt is on in Central Canada after fireball lights up skies
July 26, 2019 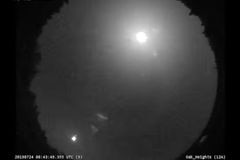 Farmer donates $400,000 meteorite to school
May 5, 2009
Meteorite hunters find first fragments of Michigan meteor
January 19, 2018
Follow Ivan Semeniuk on Twitter @ivansemeniuk
Report an error Editorial code of conduct
Due to technical reasons, we have temporarily removed commenting from our articles. We hope to have this fixed soon. Thank you for your patience. If you are looking to give feedback on our new site, please send it along to feedback@globeandmail.com. If you want to write a letter to the editor, please forward to letters@globeandmail.com.
Comments