With 10,000 pinpricks, Prabhat Jha hopes to find out what no one else has been able to discern: How many Canadians have already been affected by COVID-19?

Dr. Jha, director of the Centre for Global Health Research at St. Michael’s Hospital in Toronto, is leading one of the first large-scale surveys in the country that will examine participants’ blood for antibodies that are specific to the virus that causes COVID-19.

The antibodies are a natural part of the body’s immune response. Initial studies with COVID-19 patients show they appear about three weeks after an infection has occurred and persist for at least 60 days.

Because the first wave of infections in Canada is thought to have peaked sometime in mid-April, Dr. Jha said now is the ideal time to try to obtain a snapshot of how widely the disease has spread across the population. Starting this week, he and his team will begin shipping kits that participants can use to provide blood samples for the survey.

“The sooner we get them out the more likely we’ll capture the peak of antibody response," said Dr. Jha, who is also a faculty member with the University of Toronto’s Dalla Lana School of Public Health.

Unlike a test that is used to determine if someone has an active case of COVID-19, an antibody or serological test can reveal who has previously encountered the virus. Even those who did not experience symptoms are expected to have formed antibodies if they were exposed.

Because so many cases of COVID-19 are thought to have gone unreported, a large survey using antibody tests is seen as the only way to gauge the true extent of the pandemic in Canada.

The challenge with such an effort lies in collecting a representative sample of the population in order to ensure a meaningful result.

As a counterexample, one study of more than 3,300 adults conducted in early April in Santa Clara, Calif., estimated that more than 50 times more people in the community had been exposed to COVID-19 than was known from confirmed cases at the time. But because subjects were recruited through Facebook, critics say the results were likely skewed by participants who had reason to suspect they had been infected and were motivated to find out.

The study also used a commercial test that was susceptible to producing false-positive results when it encountered antibodies for coronaviruses other than COVID-19′s.

To avoid similar problems, Dr. Jha said he and his colleagues are working with polling company Angus Reid to assemble a study sample of 10,000 Canadians between 18 and 85 who will be individually invited to participate. The participants will be selected from a larger pool that has been previously identified by the pollster for various surveys.

Short of going door to door, “ours is as pure a random sample as one can get,” said Ed Morawski, the company’s president and chief operating officer.

To help reveal how much the disease has affected older Canadians, at least 4,000 of those sampled will be 60 or older.

Each participant will fill out a questionnaire online and then, if he or she agrees to continue with the survey, will receive a sampling kit with a finger prick and a sealable container for sending back five dried blood spots on a paper card, Dr. Jha said. The approach has been widely used in global health studies because it does not require participants to travel to a clinic to have blood drawn.

Dr. Jha said the team is still reviewing which antibody tests will be used once the samples start coming in, but added that the project could make use of large-scale testing platforms designed for research rather than diagnostics.

“We’ll probably use two [tests] at least, in combination,” he said, adding that results would be cross-checked to improve confidence. Participants will then learn whether it is highly likely, somewhat likely or unlikely that they have had COVID-19.

Dr. Jha cautioned that a positive result from the survey should not be taken as an “immunity passport,” based on the limited information that is currently available about the characteristics of the disease and the relationship between antibodies and immunity.

However, participants will also be asked to provide a second sample in four to six months to see how long antibodies remain in the blood and to help establish the extent of COVID-19 immunity in Canada.

Timothy Evans, director of McGill University’s school of population and global health in Montreal and a member of the federal government’s immunity task force, said the St. Michael’s effort is one of several that have been proposed to fill a crucial knowledge gap about the state of the pandemic in Canada over the next one to two months.

Another, organized by the British Columbia Centre for Disease Control, is still in the planning stages, said Mel Krajden, medical director of the centre’s public health laboratory.

“B.C. has a very low prevalence [of COVID-19] just based on clinical cases, so it’s in a different sort of category,” he said.

Dr. Krajden added that a survey of 10,000 individuals would probably not be sufficient to accurately portray COVID-19′s highly varied impact across Canada, particularly in underrepresented populations, such as Indigenous communities.

Dr. Jha said that with sufficient funding he, too, would prefer to increase the number. “I would like to do 100,000 Canadians – the more the better,” he said. “We’re going to work hard to get the best snapshot of the country that we can.” 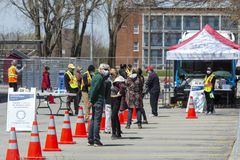 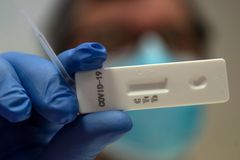 Scientists explore a simple question with big implications: Can people be reinfected by COVID-19?
May 8, 2020 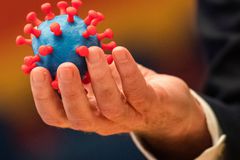