At Kingston’s Camp Carruthers and at Pipers Hill, near Tottenham, the canoes and other gear have been removed so that the grounds can be ready to be sold. And by the end of the year, the Rolling Hills Area Camp is set to close.

It is the end of an era for Ontario’s more than 30,000 Girl Guides, their parents and volunteers – but instead of generating happy memories, it underlines years of bitter litigation over the fate of the camps and the way the organization is run.

The Guides' Ontario Council has already put 16 camps on the block and a court decision in October gave it the green light to get rid of 14 of the remaining 17 camps. The children will now go to rented camp sites. The organization’s Ontario commissioner, Susan Birnie, called the move “an exciting new chapter in delivering the best Guiding outdoor experience.”

The sales began after a major shakeup the Ontario charity launched a decade ago. It was supposed to modernize the Guides, but it brought judicial turmoil and bad blood to an organization usually associated with cookies and campfires.

The camps were very dear to generations who attended, and some Guiding volunteers launched court bids to stop the sale of their local camps. Others tried to create business plans to preserve the facilities.

For some, the grief went deep. In Barrie, Sue Jessup, who was involved for more than 30 years with the Guides, refuses to buy their cookies now, after the council sued her and 17 others for refusing to turn over money they had raised for the local camp.

Dave Shepherd, also a defendant in that case, was so upset that he portrayed the Guides in a novel he published as an organization that squandered the passion of its volunteers. “This was a travesty. It need not have happened,” Mr. Shepherd said in an interview.

The controversy began in 2007, when the Ontario Guides embarked on an overhaul called the Transformation.

Between 2000 and 2007, membership had dropped from 71,500 to less than 40,000. And the organization’s multitiered governance structure, with local districts, divisions and areas, meant that “it took months to get anything done,” Ms. Birnie said in an interview.

The Transformation dissolved the districts, divisions and areas and transferred more than $3.2-million of their funds to the head office. The council also took control of 33 campgrounds that local members managed. Staff in Toronto increased from 26 full-time posts to 98. The payroll tripled, from $1.45-million to $4.5-million.

Less than two years later, the council announced that the camps were a financial drain and 16 had to be sold.

Local volunteers went to court to oppose the planned closings of Camp Ashwene in the Temiskaming district; Camp Caritou near North Bay; Camp Aneesh near Owen Sound; and Camp Klahanie, near Goderich.

Court filings detail the anger and resentment in small communities over the loss of facilities to which people had donated labour and money for decades. They said the camps' proximity made them safer and more convenient for the children than commercial campgrounds.

The council, which has run a deficit for nine of the past 12 years, said the camps were underused and costly to maintain. “Property ownership was financially and administratively untenable,” it said in a court factum.

The sales made some happy. Tech millionaire Ted Livingston, who launched the chat app Kik, bought Camp Keewaydin, also near Goderich, and turned it into a country getaway. “We saw the property and were like, `This is amazing,’ ” he said in an interview.

The closing of the camps did not play as well with the volunteers. Patricia Evans, whose mother’s donation helped set up Camp Aneesh, near Owen Sound, said in a letter filed in a court case over the planned sale that the council was estranged from the grassroots, issuing directives through conference calls rather than having debates.

“We felt betrayed. We felt very betrayed,” Lori Butterfield, a paramedic who volunteered for 30 years at Camp Caritou, said in an interview.

Ms. Butterfield and other volunteers from the North Bay area formed a group called Friends of Camp Caritou and retained a lawyer, Clemens Eggert. He wrote to the council, arguing that the Guides had to suspend the sale of the camp. “The tone and substance of your correspondence lacks civility,” Valerie Dyer, a lawyer for the council, replied in January, 2010.

She warned Friends of Camp Caritou to stay away from the facility. “The owner has not given your clients or anyone else permission to use the camp property. If they do, they will be trespassing."

In November, 2010, assessors for the council were to visit Camp Caritou, and local Guides and their parents planned a protest. However, the visitors showed up earlier and changed the locks, Ms. Butterfield said. The children and their parents gathered outside the camp anyway before local media.

Ms. Birnie said the council was unfairly painted as heartless. “It’s not a civil tone to take your young five-year-old daughter in front of a TV camera and have her crying at the chain link fence," she said.

Friends of Camp Caritou launched a court claim, arguing that the Guides could not dispose of the property because the organization only held it in trust. In a statement of defence, the council denied it was in breach of trust and said it would seek damages from the local group for hampering the sale.

In the case of Camp Tewateno, near Barrie, volunteers would not release $250,000 they had collected, saying it was raised specifically to build a new lodge at the camp. They did not want the council to put the money in a general account because donors such as local grocer Al Zaba wanted the funds used locally.

In September, 2011, the council suspended 18 Tewateno volunteers and sued them for failing to hand over the $250,000. “Each of the defendants has had the ability to extricate himself or herself from the ongoing conspiracy … they have each failed to do so,” the statement of claim said.

Mr. Shepherd, who was among those sued, said his only role in the group was helping design a footpath at the camp. A retired teacher, he said he lived for five years with the fear that the legal costs would force him to sell his house. “It was a financial strain, and most importantly, it was an emotional strain.”

Most of the defendants were of retirement age, according to their statement of defence, although Ms. Jessup, her daughter Kristen, a student who was helping design a playground at the camp, and husband, Stan, were also among the group.

Mr. Jessup, a police officer, said his role was clearing the bush at the site. Ms. Jessup, a nurse, said she had to postpone her retirement by two years to make sure she could pay the legal costs.

The 18 said in a court paper that “they lost any faith in the honesty and integrity of the plaintiff" and described the lawsuit as "bullying tactics.”

The council said the defendants had been given the opportunity to remove themselves from the group accused of withholding the funds. “We certainly didn’t bear any ill will,” Ms. Birnie said.

In June, 2016, a judge ordered that the money be returned to the donors. The volunteers were stuck with legal bills of more than $53,000.

Five months later, the provincial watchdog for charitable properties entered the picture in the case of another camp. The Office of the Public Guardian and Trustee applied to the court, arguing that Camp Aneesh was held in trust and therefore the council could not sell it without judicial approval.

Camp Aneesh had already been sold, and by then court challenges for the first group of camps being sold had either been dismissed or settled.

‘We learned a lot of lessons’

Despite the first wave of camp sales, the council was still running a deficit and wanted to divest the remaining facilities. This time, it sought court authorization, pledged to place the proceeds in a dedicated fund, made an effort to communicate with volunteers and gave them the opportunity to present business plans to keep their local camps, Ms. Birnie said. “We learned a lot of lessons,” she added.

The court approved the sale of 14 of the remaining 17 camps. Camp Tekahionwake, north of Brantford, was kept because its volunteers' business plan was accepted. The futures of Camp Bryerswood, near Windsor, and Camp Tewateno are to be decided after a review of business plans from their supporters.

Volunteers at Bryerswood and Tewateno did not want to comment. However, in a court affidavit, Joyce Goodenough of Camp Tewateno said the council did not maintain the facility properly. There was damage from mould and moss, mice and squirrels invaded the buildings, stoves were rusting, she said. She added that the council did not charge enough when renting the camp out to other users to cover expenses.

In Windsor this past summer, Isabella Cowan-Rivera, 11, donated her $25 birthday money to start a fundraising drive to help save Bryerswood.

Her efforts have raised $1,000 so far, and she plans to hold a yard next spring. “It’s a great place. I have many great memories,” she said in an interview. “It means a lot to me and I would be upset if I lost it.”

With a report from Shane Dingman. 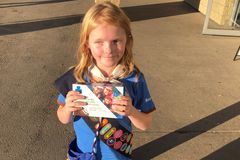