The national spotlight on residential schools is also highlighting a difficult question facing some communities over what to do with the buildings that have been left behind.

The structures, which now serve as a preschool, band office and elders’ congregation centre, are too painful for some community members to enter, said Chief Byron Louis.

“A number of our community members won’t even set foot in there unless they absolutely have to,” he said in an interview from Vernon, B.C.

“You can imagine the memories of some looking around and remembering what it was like being there as children.”

The First Nation would like to see the structures replaced with “places of healing,” Louis said.

He wrote the letter less than two weeks after the Tk’emlups te Secwepemc First Nation in Kamloops, about 120 kilometres west of Vernon, used ground-penetrating radar to detect what are believed to be the remains of 215 children in unmarked graves.

The federal government did not respond to a request for comment on the letter.

The Okanagan Indian Band is not the first community to grapple with the question of what to do with former residential and day school buildings. Some have opted for demolition, while others have chosen to preserve the schools as standing records of what happened.

Former Kamloops chief Manny Jules said there have been many debates over the years about the future of the former Kamloops Indian Residential School, but band members have decided to keep it as a reminder to future generations that their children will never go through such an experience.

Band members have also decided to keep the building as a legacy to past chiefs, who always supported the education of their people but whose efforts were thwarted by the policies of Canadian governments and the Catholic Church, he said.

Jules said the federal government offered Tk’emlups te Secwepemc $70,000 in the 1970s to tear down the school, but the nation declined the offer.

“What we said at the time is we want to turn these buildings into a legacy for language, history and culture, for education and all those other aspects,” said Jules. “Why tear it down?”

As far back as 1910, then-Kamloops chief Louis called on the federal government to make Indigenous-run education a treaty right, he said.

“When I look at this complex, because I feel it’s the legacy of Chief Louis, it’s how do we turn this into a memorial for every student that ever attended this complex?” said Jules, who was the elected chief from 1984 to 2000. “How do we turn it into a memorial so that when people look at it, and of course there’s going to be ghosts here for all times, but we want to make sure that that legacy is never forgotten and never repeated.”

In 2015, survivors flocked to Alert Bay, B.C., to take part in an emotional ceremony and witness the demolition of St. Michael’s Indian Residential School.

Robert Joseph, a hereditary chief of the Gwawaenuk First Nation and co-founder of Reconciliation Canada, said he spent 11 years at the school beginning around age six in the mid-1940s.

The towering building was a regular and painful reminder of what happened, said Joseph, who also has a home next to the school grounds.

On the last evening of the ceremonies before the demolition, survivors gathered in the Big House for a celebration, challenging themselves to move forward beyond a dark period of their lives, he said.

“It was absolutely transformative for me. I felt renewed after everything was done, and all that there was left to do was remove all the remnants of that building,” he said.

“We won’t really ever be free until we’ve resolved internally, individually, all of those things that impacted our lives and called us to live in addiction and rage and anger.”

The decision to tear down the school wasn’t unanimous, he said, but its poor condition added to the consensus to demolish it.

Joseph said his advice for other communities is to have a thorough discussion that considers the pros and cons of keeping the structures.

The field where the school stood is bordered by the U’mista Cultural Centre, a museum dedicated to the survival of Kwakwakawakw cultural heritage. While the cultural centre was built 25 years before the demolition, Joseph said he thinks it’s appropriate that community members can go there to learn about their history, ceremony and Indigeneity.

“It was sort of a perfect transition. Now the U’mista centre is a beacon of hope and light.”

With files from Dirk Meissner in Kamloops 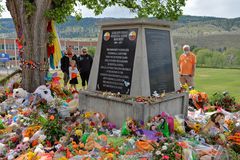 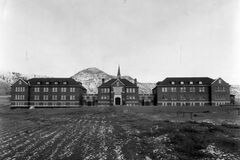 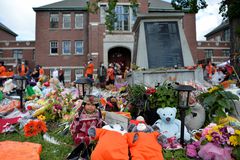