A Hamilton police officer has been sentenced to 12½ years in prison after an unprecedented months-long trial into bribery and police corruption.

“I love you guys,” the disgraced police officer called out as he was led out of the Toronto courtroom in handcuffs.

The sentence – one harsher than even the prosecution had called for – came down almost one month after the 44-year-old was found guilty of bribery, breach of trust, obstruction of justice and cocaine trafficking.

After five weeks of testimony, a jury found that the guns and gangs officer took hundreds of thousands of dollars in bribes from drug dealers in exchange for information and protection.

In addition to his prison sentence (which includes six months credit for time served), Det. Const. Ruthowsky was fined $250,000. If it’s not paid within the year, he will have another three years tacked onto his sentence.

One cocaine dealer, Mr. X (whose identity is protected by a publication ban, for his safety), testified that he paid the officer $20,000 a month – an arrangement that essentially allowed him to deal drugs with impunity.

“Craig Ruthowsky is, at base, a man of profoundly flawed character,” he ruled. “He chose to break the law because it was lucrative to do so. He was arrogant enough to think he could do so with impunity.”

Though it was only one officer on trial, the proceedings shed light on corruption within the Hamilton Police Service’s guns and gangs unit: a rogue team that operated out of a decommissioned police station, with a “profound lack of supervision,” Justice Clark noted.

Evidence – including cash, drugs and guns – was stored on the same shelves where officers kept their personal belongings. Notes were haphazard. Informants were kept off the books.

As the guns and gangs unit’s star investigator, with the largest roster of informants in the entire force, Det. Const. Ruthowsky held a position of trust that allowed him to commit his crimes, Justice Clark said Tuesday.

And while he noted that Det. Const. Ruthowsky took every instance on the stand to praise himself and disparaged his fellow officers, Justice Clark said that “it was he who was the woefully substandard officer.”

“These are not victimless crimes,” he said. “That could not be more obvious. The victim is society.”

Det. Const. Ruthowsky has remained on the Hamilton Police payroll throughout his trial – despite having been suspended from the service since 2012. He has been paid roughly $570,000 in that time, HPS spokesperson Jackie Penman confirmed in an e-mail Tuesday evening.

Though he was charged criminally in 2012, the charges were stayed in 2013 because it was argued that a trial risked identifying informants.

It was not until 2015 that these charges were laid by the Toronto Police Service as part of a larger drug and gang investigation, after the suspended officer was overheard in a wiretapped phone call giving a drug dealer advice.

Det. Const. Ruthowsky tried to justify that conversation and his relationships with the drug dealers, arguing during his testimony that they were informants that he was using for information – an explanation Justice Clark ruled was “so implausible it borders on farcical.”

He said it is clear even today that the officer ”has absolutely no insight into the profoundly wrongful nature of his actions.”

“He didn’t take a cent,” Det. Const. Ruthowsky’s mother yelled at reporters outside the courtroom afterwards, before being led away by her daughter.

The jury heard from a forensic accountant at trial, who testified that the Ruthowsky family had $130,000 of unexplained income between 2011 and 2015. The couple bought new vehicles, did extensive renovations, and made deposits on two condos during that time.

”It certainly begs the question of how much his wife knew,” Justice Clark noted Tuesday.

“My client’s wife was not before the court, she was not possessed of the ability to defend herself against any slur on her integrity, on her reputation,” he said in an e-mail afterwards. “In the circumstances, it was, with respect, entirely unfair to float up the spectre of complicity on her part.”

Det. Const. Ruthowsky has appealed the conviction, claiming among other things that the judge exhibited bias throughout the trial through eye rolls and audible sighs – particularly during his own testimony.

He will be back in court Thursday, seeking bail pending appeal.

This fall, Det. Const. Ruthowsky will face a preliminary inquiry into another 16 charges laid against him last year. Among those allegations is that he conspired to plant guns – including a TEC-9 machine gun and a .380-calibre handgun – on two different people.

Why was a suspended officer giving advice to criminals? The long and winding tale of a dirty cop
May 6, 2018 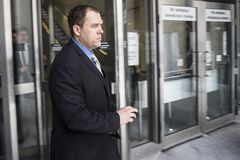