This historic port city welcomed an unexpected early guest on Easter weekend: a sizable iceberg, a ridge of white framed between the hills of the Narrows leading into the city’s harbour.

Visible from downtown, the photogenic ‘berg drew excited locals and tourists to trails along the city’s iconic Signal Hill on Sunday, and raised expectations for this year’s iceberg season.

The ‘berg’s early arrival is a good sign for the lucrative industry that offers tourists a look at the frozen formations, most often seen drifting down the coast of the island from May through the summer months.

Barry Rogers, whose Iceberg Quest Ocean Tours operates out of St. John’s and Twillingate off the island’s northeast coast, said there have already been upwards of 20 icebergs sighted in the Twillingate area, suggesting a rewarding few months ahead for iceberg chasers.

“I’m very optimistic about this season now,” Rogers said. “It’s a darn good sign to have had this much ice around in our Twillingate area in particular.”

Meteorologist Brian Walsh said 2019 “should be a good tourist season for icebergs,” as wind patterns drive more of them closer to Newfoundland’s coast.

“With a lot of onshore winds for the next while, it is expected that a number of icebergs will become visible from shore, or ground along the coast, over the next several weeks,” he said Monday.

Most of the ‘bergs floating down the east coast area known as Iceberg Alley come from Greenland after breaking off of 10,000-year-old glaciers and falling into the sea.

Despite last year’s small showing, the island’s iceberg season has captured the word’s attention year after year, with striking images that show off the sheer scale of the icebergs against small boats and buildings.

One towering iceberg drew a flood of onlookers to Ferryland, a town of about 500, in April 2017, and made headlines in global media including The New York Times, CNN, BBC, Time, The Guardian and Russia’s state-backed news channel.

After being in business for over 10 years, Rogers said he doesn’t get tired showing off the beautiful natural phenomenon to tourists and locals who don’t seem to get weary of seeing the contours, changing light and reflections while out on the water.

Some of the wonder comes from what’s left unseen, Rogers said, given that about 90 per cent of an iceberg’s mass is submerged under water.

“You have to really let your imagination kick in to be able to think about that full volume,” Rogers said. “That intrigues a lot of people, the beautiful colourations and so on.”

While onlookers gathered on land Sunday, St. John’s photographer Alick Tsui was down with Rogers and his team on the water for an up close and personal look at the floating spectacle.

“From my estimate, the ‘Easter Berg’ is about 6 metres high and 60 metres in length. It is a beautiful flat tabular small berg,” Tsui wrote in a blog post.

Tsui has shot many iceberg photos over the years but said he doesn’t tire of the chase -- he was considering driving to Bonavista, about three hours up the coast, to shoot photos this weekend but was lucky enough to catch the St. John’s ‘berg by staying close to home.

His iceberg chases have taken him up and down the island, and he said he recommends friends come to visit during iceberg season to catch the special sights known to arrive at many Newfoundlanders’ doorsteps.

“In Twillingate two years ago, I sat down on a hill and watched an iceberg for three hours watching the boats pass by and seeing the waves cutting on the iceberg,” Tsui said.

“If you are lucky enough you can see one of the icebergs that splits into little pieces and that will be amazing. The sound it made was so loud, I mean, you could never, never forget it.”

Sure, it tastes good, but what are thieves going to with 30,000 litres of stolen Newfoundland iceberg water?
February 13, 2019 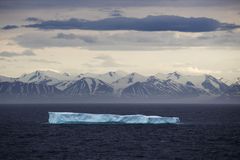