PRINCE ALBERT, Sask.
The Canadian Press
Published May 19, 2021 Updated May 19, 2021
Comments
Text Size
Please log in to listen to this story. Also available in French and Mandarin. Log In Create Free Account

The reeve of a Saskatchewan community threatened by a fast-moving wildfire says firefighters and farmers are coming together to slow down the blaze.

“Everybody’s doing the best they can at this point.”

Scragg said people in the area are no stranger to fires, but this one has been fuelled by a nearby forest that hasn’t seen a blaze in decades.

Helicopters were fighting the uncontrolled fire from the air and farmers were helping provide water on the ground to help save their neighbours’ properties, Scragg said.

People in eight homes in the municipality’s Berg subdivision, about 40 kilometres northeast of Prince Albert, were forced to leave Wednesday morning.

Dozens of people have had to leave their homes since the fire started on Monday near the province’s third-largest city of about 40,000. A state of emergency was declared later that day for Prince Albert and the Rural Municipality of Buckland.

Officials said evacuees from 75 households in Prince Albert have been registered.

The Saskatchewan Public Safety Agency said as of late Wednesday afternoon the wildfire was about 65 per cent contained, but wind speeds and changing wind direction continued to make the situation challenging.

The fire had grown to more than 40 square kilometres due to high winds and significantly dry conditions in the forest.

Steve Roberts with the agency said it was moving farther away from Prince Albert, which is about 140 kilometres northeast of Saskatoon.

The fire was not producing a significant amount of smoke in the city, he added. Colder weather in the forecast was also making officials optimistic about getting the blaze under control, he said.

The Prince Albert Police Service said it issued $2,000 tickets to two people who were located unlawfully inside the perimeter of the fire overnight Tuesday. Police said a man and a woman were inside the fire area who don’t live there.

No homes have been destroyed but many communities north of Prince Albert were left without electricity due to significant damage to power infrastructure.

Joel Cherry with SaskPower said 8,000 customers were still without service on Wednesday. They included the communities of Waskesiu, Meath Park, La Ronge and Stanley Mission.

The area along Highway 55, between Prince Albert and the Pulp Haul Road, has been evacuated due to the fast-moving fire. Residents have been evacuated and no one is being allowed to go back into the area at this time for their safety and the safety of first responders working in the area.

Stanley Mission, about 80 kilometres northeast of La Ronge, declared a state of emergency due to the prolonged power outage. Tammy Cook-Searson, chief of the Lac La Ronge Indian Band, said in the declaration that there were issues with water availability and sewers were backing up.

Cherry said crews were working around the clock to repair damage from the wildfire. If the weather continues to cool, he said power could be restored in a day.

Evacuations expanded as dry conditions, strong winds cause Saskatchewan wildfire to grow
May 18, 2021 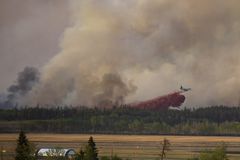 Fire prompts evacuation of part of northern Saskatchewan city
May 17, 2021 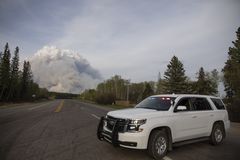