A former Manitoba cabinet minister who quit her post in the wake of controversial comments by Premier Brian Pallister says she was offered, and rejected, an appointment to a powerful government committee.

Eileen Clarke was listed Tuesday as a new member of the provincial Treasury Board, which oversees government spending. The appointment was posted on a government website, among the regular weekly list of decisions made by the provincial cabinet.

Ms. Clarke declined interview requests Wednesday, but said through her constituency office she was caught off guard and turned down the post.

“Ms. Clarke had not been made aware of any appointment to government Treasury Board, but on [Wednesday] did receive an e-mail from the secretary of the Treasury Board congratulating her on the recent appointment and a request to meet,” read a prepared statement from Ms. Clarke’s constituency office.

“Eileen has contacted the premier’s office and will not be accepting the Treasury Board appointment.”

Mr. Pallister’s office said the online announcement of Ms. Clarke’s appointment was a mistake and she had not been offered the position.

“Due to an administrative error, an outdated draft group of orders-in-council regarding cabinet committee memberships was inadvertently posted,” Mr. Pallister’s press secretary, Olivia Billson, wrote in an e-mail Wednesday.

“This error was already in the process of being addressed yesterday. Ms. Clarke was informed of this. New orders-in-council are being posted today.”

The drama came two weeks after Mr. Pallister denounced the vandalism when statues of Queen Elizabeth II and Queen Victoria on the legislature grounds were torn down during a protest over the deaths of Indigenous children at residential schools.

Mr. Pallister said people who came to Canada did not do so to destroy anything, but to build communities, churches and businesses.

First Nations leaders accused Mr. Pallister of playing down the harmful effects of colonialism. Ms. Clarke resigned her cabinet post as minister of Indigenous and northern relations two days later, and said she would retain her legislature seat.

The controversy has ballooned since then.

Two Indigenous men who had been appointed by the Pallister government to economic development boards quit last week, saying they could not support the government’s take on Canadian history.

Ms. Clarke’s replacement in Indigenous relations, Alan Lagimodiere, stirred up more controversy within an hour of being appointed to cabinet last week by saying some of the intentions behind residential schools were good.

Conservation and Climate Minister Sarah Guillemard posted on Twitter that she could not “stand behind words that add hurt to traumatized people.”

Mr. Pallister has also seen the departure of some staff recently. His director of media relations and issues management, Blake Robert, served notice this week that he is leaving for a new job at the STARS air ambulance service.

Mr. Pallister has hinted that he may not serve out his full term and leave well before the next election slated for October, 2023. In a year-end interview with The Canadian Press last December, Mr. Pallister would only commit to staying on to deal with the COVID-19 pandemic.

The pressure to leave soon, or at least set a departure date in the near future, is building, Paul Thomas, professor emeritus of political studies at the University of Manitoba, said Wednesday.

He pointed to recent opinion polls that suggest Tory support has fallen well back of that for the opposition New Democrats. He also pointed to Ms. Clarke’s resignation from cabinet as one of a number of signs of growing dissent.

“It’s slow and it’s not a frontal attack on [Pallister’s] leadership, but it is building,” Prof. Thomas said.

The Opposition New Democrats said the Tory infighting was distracting from other issues such as the drought facing agricultural producers and wildfires forcing evacuations from communities in the north. 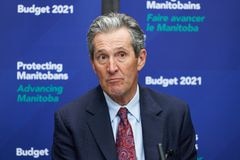 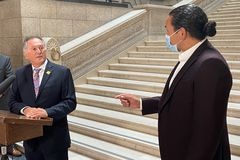 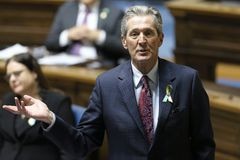