Freeland’s remarks, given in French, build on Prime Minister Justin Trudeau’s publicly expressed openness earlier this month to tighter restrictions, sparking questions about how a stricter isolation regime would work.

In New Zealand, which had 64 active COVID-19 cases as of Monday, passengers head straight to a “managed isolation facility” – a hotel – if they have no symptoms or a “quarantine facility” if they do.

In South Korea, most non-residents must self-isolate for two weeks at a government-designated facility at their own expense and download a tracking app to ensure compliance.

The federal government has not consulted with the airline industry about more stringent measures, said Mike McNaney, head of the National Airlines Council of Canada.

If implemented, the quarantine requirement would serve to deter leisure travel, said Dr. Zain Chagla, an infectious-disease physician at St. Joseph’s hospital in Hamilton, Ont., and an associate professor at McMaster University.

Rather than rigid adherence to two weeks of isolation, the move should include scheduled testing that might allow guests who come up negative to go home early, he said.

“Whether or not it has to be the entire 14 days or a shorter amount followed by testing is still up in the air,” Chagla said.

Most cases are detectable after seven days – including mutated strains of the virus – he added, citing data from the U.S. Centers for Disease Control and Prevention.

About two per cent of cases with “known exposure” have been linked to international travel, and an even smaller proportion in recent weeks, according to the Public Health Agency of Canada. However, there is still virtually no testing at the border and many recent cases do not have an identified source.

“It’s more difficult to travel within your own province or frankly within Canada than it is to jump on a flight and travel across the world. So some measure to limit non-essential air travel – I think there’s a strong case to be made,” Singh said.

Ontario Premier Doug Ford called on Trudeau to mandate testing of all arrivals, by air and land, saying he had confidence Ottawa would require it.

“But we need it now,” Ford said. “Every time I look up in the sky I’m thinking, `How many cases are coming in?”'

More than 150 international flights with confirmed COVID-19 cases have touched down in Canada in the past two weeks, according to figures from the public health agency.

The infected arrivals come despite new rules effective Jan. 7 that require passengers returning from abroad to show proof of negative results on a COVID-19 test taken within 72 hours of departure.

Canada has also barred most foreigners from entering the country since March, and requires two weeks of self-isolation at home upon return.

Prolonged confinement in a single room at a hotel could come with mental and emotional consequences.

“It has not been easy for the people I know that have gone to Australia. It’s fairly hard to deal with it,” Chagla said.

A sturdy internet connection, access to a computer or tablet and child-friendly accommodations would be key to easing the psychological strain, he said.

“You may need some ability to have people outdoors in the facility to get fresh air. It is kind of cruel to impose 14 days in a dusty hotel room that’s one bed and very limited TV channels.”

The airlines council, whose members include Air Canada and WestJet, along with unions representing 325,000 aviation workers, have been pushing for a relief package and a comprehensive testing plan for months.

On Monday, Transport Minister Omar Alghabra reiterated the government’s pledge to support the sector financially on the condition that airlines refund passengers whose flights were cancelled during the pandemic. 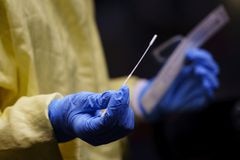