It all started with a warning from police. A father in Beloeil, Que., complained to city hall that his six-year-old son faced the threat of a ticket for playing hockey on the street in front of his house.

“I couldn’t believe it,” recalled Pierre Verret, the city councillor who received the complaint in 2014. “I played street hockey with my friends during my whole childhood. I found it incredible that our children didn’t have the freedom to play outside.”

And so began a minor revolution to turn the streets of Beloeil over to the cause of old-fashioned child’s play. Today, 48 residential streets in the suburb east of Montreal have earned city designations as free-play zones, complete with lower speed limits, hours of play and high-visibility signage. It’s allowed kids to do something that has become a rarity in these risk-adverse, hyper-vigilant times: play out in the street.

“It’s good because I can play right outside my house,” Marc-Antoine Brisson, 16, said in the middle of his street this week as he shot hoops with his brother, Maxime. “On the weekend, there are so many kids everywhere, cars can’t drive fast.”

As he spoke, a car approached and slowed down. The boys paused briefly and moved to let it pass, then resumed their lay-ups.

“I’ve made new friends,” said Maxime, 10. “Before, we just played in the driveway. Now there’s more space to have fun.”

The award-winning initiative in Beloeil has been emulated in 17 other towns in Quebec, joining a global trend to let children enjoy unstructured play on their doorsteps, away from screens, parents, teachers, camp counsellors and the other overseers of their time.

Proponents say free play offers a crucial antidote to organized and supervised kids’ activities. Left on their own, kids learn to take risks and test their physical limits, laying the groundwork for developing motor skills as they grow up.

“We’re seeing new generations of helicopter parents who have fears – they don’t want their kids to get hurt, to fall, or to climb trees because it’s dangerous,” said Corinne Voyer, director of the Quebec Weight Coalition, which helped Beloeil set up its street-play program. “But kids need to learn how to jump and run and evaluate whether they can take risks without consequences. They need to know if they can climb monkey bars without falling. If we create completely sterile environments to avoid accidents, children won’t learn the physical skills they need to do sports later in life.”

Those barriers include anti-noise and anti-nuisance bylaws that are commonplace in cities across the province and can be enforced by police to stop a street-hockey game if they receive a complaint. Beloeil modified its own anti-nuisance bylaw in 2016 and turned to the province to clear a legal path for street play. In 2017, it got what it wanted. The Quebec National Assembly adopted Bill 122, a law granting municipalities more autonomy, including “the power to permit free play in the streets.”

Beloeil’s program, Dans ma rue, on joue!, took off. In spirit, it summons up a bygone time of outdoor play with neighborhood friends. Of course, things were simpler then. All it took for a child to go out and play was a parent shouting “Go out and play!”

Beloeil’s program, on the other hand, adds a healthy layer of modern-day regulations.

To turn a street in Beloeil into a free-play zone, a parent has to submit an application to city hall. The request is studied by the city’s traffic committee, which rules out streets that are unsafe due to traffic flow or obstructed views; curving streets or those with hedges or view-obscuring trees, for example, are rejected.

Then, the application is sent to all the neighbours on the street; it takes the support of 66 per cent of them for the project to go ahead. Three streets in Beloeil have failed to get enough support and lost their bid. (One woman who voted against the idea said in an interview she thought it was too risky and kids should play in parks and backyards.)

If approved, each family receives a certificate of recognition, code of conduct and letter of thanks. Speed limits on the designated streets are reduced to 30 kilometres an hour and signs announcing the play zones are posted at either end. Children can play from 7 a.m. to 9 p.m. as long as street lighting is adequate.

The program has turned some residential streets into boisterous play zones of kids shooting baskets, playing hopscotch, practising slapshots and skipping rope. On Donat-Corriveau St., seven hockey nets line the curb. Some days, there are 20 kids on the crescent playing hockey, said David Vachon, a father of three kids, 10, 13 and 16.

“It’s easy and accessible for the kids, all you have to do is open the door. And I can keep an eye on them,” he said. “If they didn’t play here, it would limit their physical activity.”

The set-up has also created bonds between neighbours. Parents regularly gather to watch the kids. Some turn up in chairs with a glass of white wine in hand, Mr. Verret said. Experts say play zones reclaim part of the street from cars, while building a sense of community.

“It’s a very powerful yet practical way to start using streets in ways that are better for everybody,” said Tim Gill, an independent British researcher specializing in child-friendly urban planning. “It moves away from the idea that the sole job of a street is to be a place where the car is king and everybody else just has to get out of the way.”

To help adults appreciate the value of free play, he says he often reminds them to think of their own childhood memories.

“I’m keen to remind grownups of the everyday magic of being out in your neighborhood playing with your friends,” Mr. Gill, author of No Fear: Growing Up in a Risk-Averse Society, said from London. “It’s not mere nostalgia. These are powerful, formative experiences that helped us to figure out where we were and how we solved problems.”

Problem-solving is what motivated Mr. Verret. When he was faced with a kid risking a ticket for playing street hockey, he said he felt he needed to respond. “If I can leave one legacy this will be it,” the 58-year-old councilor said. “I just want kids to go play outside.” 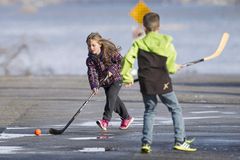