Hong Kong pro-democracy lawmaker Alvin Yeung, a former Canadian citizen, is urging Canadians to demonstrate their support for Hong Kong protests that began in response to an extradition law many fear would hand Beijing more direct control over the former British colony.

Mr. Yeung, who was raised and educated in Canada, urged Ottawa to pay very close attention to its interests in the Asian city, which was once again rocked by protests Monday.

“We need people to send their support,” Mr. Yeung said in an interview.

The 38-year-old legislator is the leader of Hong Kong’s Civic Party, belonging to the liberal side of the legislative council that scrutinizes proposed laws in Hong Kong.

He said as a politician he has to be careful not to invite a foreign government to intervene – Beijing has already blamed the unrest on outside interference – but he called on Canada to look after its interests in Hong Kong.

On Monday, a general strike descended into citywide mayhem. Amid extensive disruptions to trains and traffic, tens of thousands of demonstrators fanned out across Hong Kong, spreading pockets of activism to most of its main three regions: Hong Kong Island, Kowloon and the New Territories.

The department of Global Affairs estimates 300,000 Canadian citizens live in Hong Kong, making it one of Canada’s biggest overseas communities.

“You are simply exercising your right as a sovereign state to pay attention to what is going on in this international financial centre.”

He said Hong Kongers want to preserve the same rights as Canadians.

“We share the same values. Hong Kong is a place that cherishes the rule of law, freedom of expression, freedom of assembly and all kinds of freedoms that Canadians uphold … and Hong Kong is where we are standing at the front lines to for our own freedom, fighting against an authoritarian state," he said.

On Monday, fresh protests surpassed earlier shows of dissent in scale and intensity.

After disrupting traffic early in the day, protesters filled public parks and squares in several districts, refusing to disperse even as police repeatedly fired tear gas and rubber bullets from above. While previous large rallies have generally been held on weekends, Monday’s strike paralyzed city operations in an effort to draw more attention to the movement’s demands.

What started several months ago as demonstrations over an extradition bill that would have let people be sent to mainland China for trial has grown into a much broader backlash against the Hong Kong government and its political masters in Beijing.

Mr. Yeung, who also happens to be a long-time Raptors fan and Timbits devotee, credits the formative years he spent in Canada for his political leanings.

“It is Canadian values that laid the foundation of what I believe in,” he said.

Mr. Yeung said Hong Kong’s citizens want to preserve an open society, despite what critics describe as an erosion of basic rights in recent years as well as Beijing’s encroachment on the autonomy it previously guaranteed the former British colony.

He said Hong Kongers have never supported allowing people being extradited to mainland China, which “has no rule of law and no human-rights protection and no fair trial.”

The legislator said he does fear that Beijing might order the People’s Liberation Army to march on Hong Kong to quell the unrest. Mr. Yeung says that would bring about a “complete loss of confidence” for foreign investors and produce another “June 4th," referring to the 1989 Tiananmen Square Massacre in China’s capital where rights groups and witnesses estimate thousands of demonstrators were killed.

“Over the past two months, we have witnessed countless incidents of abuse of power by the police and since the beginning of this political saga and turmoil we have seen nobody from the [Hong Kong] cabinet being held accountable or responsible,” Mr. Yeung said.

“Can you imagine this in any open society?”

Mr. Yeung, whose Hong Kong mother obtained Canadian citizenship after the 1989 massacre, attended high school in Aurora, Ont. in the 1990s and later obtained a Bachelor of Arts from Western University in London, Ont.

Eight years in Canada left their mark. He misses double-doubles at Tim Hortons, and the shelves of his office at Hong Kong’s Legislative Council bear witness to his Canadian upbringing. There are two biographies of Pierre Trudeau and a collection of the former prime minister’s writings nestled between books on Winston Churchill and Nelson Mandela.

After further studies abroad, he returned in Hong Kong in 2007 and worked as a barrister in the city’s courts.

But Mr. Yeung said the 2014 Umbrella Movement, when Hong Kongers occupied streets for nearly three months to demand greater democratic rights, helped convinced him to enter politics. He relinquished his Canadian citizenship to meet the requirements for seeking a Legislative Council seat representing an area in the New Territories, the northernmost region of Hong Kong. He’s held the seat for New Territories East since 2016.

The lessons he learned in Canada remain with him. He said he was shocked as a teenager, fresh from Hong Kong, when he witnessed how peacefully Canada debated and handled the 1995 Quebec referendum, a vote that could have precipitated the province’s departure from confederation.

“I still remember prime minister Jean Chrétien travelling to Quebec and giving a speech to persuade the Quebecois to stay instead of forcing them,” Mr. Yeung said.

“That planted a seed in my mind about how a civilization should work.”

Mr. Yeung said he developed respect for the elder Trudeau for having patriated the Canadian constitution and adding a Charter of Rights to protect people from unfair state action. “He did things wrong as a politician, of course, every political does. But he laid a very solid foundation for the open society Canada is today," he said.

"I understand Canadians have many complaints. It’s not perfect. But still, it’s a place where people can discuss and choose. It has respect for human rights and respect for diversity.”

Hong Kong leader Carrie Lam, refusing protesters’ demands to resign, on Monday said the city is on “the verge of a very dangerous situation."

Protesters challenged law enforcement in at least eight districts, responding to continuous rounds of tear gas with practiced swiftness. They lobbed the canisters back at police and yelled invectives. When police arrived, the protesters clacked umbrellas together and pounded on metal street signs, daring the officers to move closer.

“Gangsters!” they jeered at the riot police. “Reclaim Hong Kong, revolution of our time.”

In one neighbourhood after nightfall, a band of men wielding wooden poles charged protesters from behind a thin road-lane divider.

Mr. Yeung said the demands of Hong Kong protesters – whose numbers have risen as high as two million – since the beginning of this conflict have included a withdrawal of the extradition bill, an independent commission of inquiry and Ms. Lam’s resignation. He described these as “absolutely reasonable” and said it was Ms. Lam’s inaction “that turned things into chaos.”

With files from Associated Press and Reuters 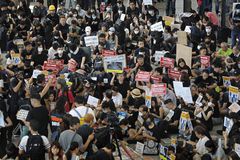