Coronavirus information
The Zero Canada Project provides resources to help you make the most of staying home.
Visit the hub
Oliver MooreUrban Affairs Reporter
Published May 8, 2020 Updated May 8, 2020
Comments
Please log in to listen to this story. Also available in French and Mandarin. Log In Create Free Account

Mandatory face masks, running more off-peak service, PR campaigns and finessing passenger flow are some of the ideas being considered as Canadian transit agencies plan for jurisdictions starting to reopen.

Maintaining physical distance on transit during the pandemic has not been a problem in most cities. Agencies have generally cut service but seen ridership decline to a greater degree, meaning that those people still taking transit are usually getting some space.

But that’s not the norm for transit, which moves vast numbers of people economically and efficiently by packing them in closely. With the pandemic still under way, Canadian transit agencies are busy trying to figure out how they will manage once crowds flock back to their trains and buses.

“With each stage reopening of the economy, some of our riders are going to come back,” said Kevin Desmond, CEO of TransLink, which serves the Vancouver area and has seen its passenger volumes drop more than 80 per cent.

It’s a problem facing every transit agency in the country.

The commuter and local agencies serving Montreal are waiting for provincial direction before announcing post-lockdown procedures. In Toronto, the local transit agency says that it is examining many options, but that final decisions haven’t been made, while the region’s commuter agency is moving forward with plans. Vancouver is gaming out possible scenarios and is ready to borrow ideas from anywhere in the world, Mr. Desmond said.

The problems facing agencies are not only of geometry – the passengers on a crush-loaded Toronto subway train would, if lined up at two-metre intervals, stretch more than two kilometres – but also psychology.

Research indicates that some straphangers could be reluctant to return to transit, at least for some time. A Canadian poll conducted in early March, before the pandemic was even declared, showed that 40 per cent of respondents thought transit posed a high health risk.

Transit leaders acknowledge that some behavioural change is to be expected from the public. But no major city can function without an efficient mass transit system. If even a modest percentage of former users opt instead to drive, roads will be overwhelmed and transit starved of revenue. The existential question for transit is how to manage operations so that riders feel safe enough to return and ride in large numbers.

Looking at just one transit station in downtown Toronto offers an indication of how difficult it will be to cope once ridership begins again to build across Canada.

In normal times, Union Station is one of the country’s busiest transit hubs, the destination for most commuter rail trips on GO Transit and a heavily used stop on the TTC subway. It handles more than 300,000 passengers daily.

Metrolinx, which oversees GO, is getting a pair of lucky breaks in the pending opening of a new bus terminal and concourse area at Union Station. Both will add space, though not enough to allow for physical distancing in the station if pre-pandemic levels of crowding resume.

And there are other complications. The need to allow passengers to disperse will likely prevent trains disgorging on both sides of a platform at once, increasing time spent in the station. Outbound passengers will likely need to be kept one level below the trains, and let up in groups small enough that they don’t crowd the platform. The food court, the line-up area for customer service, and the spaces around the ticket-vending and fare-card validating machines will all need to be considered.

Metrolinx, a regional transit agency that answers to the provincial government, did not make a representative available for an interview this week. In a statement, CEO Phil Verster promised a big increase of staff members in stations to help manage passenger movement by encouraging people to disperse to every available inch.

“We are doing a huge number of markings and decals in our stations to ensure safe flow … and our customers will start to see those appearing in the coming weeks,” he said. “Additional station staff will be helping marshal people to spread out throughout the station and stairwells, as well as on the platforms.”

Transit agencies can go only so far in their attempts to spread out passengers, though. It may work for the initial weeks or months of the recovery, but not once passenger volumes approach normal levels. Stations have limited space and rationing the number of people who can get on vehicles will lead to frustration. Sticking with strict limits risks turning off would-be riders, and undermining the fundamental business model of transit.

“The railways will economically be completely constrained [if] forced to impose social distancing,” Christian Wolmar, a transportation writer and broadcaster based in London, told a recent webinar organized by the news aggregator Transport Info. “Similarly with buses, the economics just don’t work and we’re going to need fantastic subsidies.”

In Toronto, where the TTC is currently restricting the number of people who can get on each bus, there’s an acknowledgement that this practice can’t go on indefinitely.

“We cannot carry [the regular total of] 525 million people a year if we only carry them 15 people to a bus … that’s just not possible, it’s not really an urban public-transit system with that degree of physical distancing,” said Scott Haskill, head of project development and planning for the TTC.

“There’s no question that, as this pandemic evolves and changes, we will at some point have to change from a planned 15 people per bus to some higher number. We don’t know what that number is yet.”

If crowds are inevitable, transit agencies will have to mitigate the risk in other ways, doing what they can to spread passengers throughout the day while also striving to convince riders the system is safe.

Some Asian cities have moved to increase off-peak service, adding incentives to encourage people to travel outside of rush hour. Mr. Desmond says TransLink is considering the idea, though it carries a financial burden.

A number of Canadian transit agencies are also weighing whether face masks will need to be made mandatory for everyone on board. On Friday afternoon, ATU Local 113, which represents most TTC workers, called for Toronto to require passengers to wear masks.

The idea might prove controversial on a continent with no history of public mask wearing, although face covering has become less unusual in recent weeks. There are also questions about how it would be enforced. For the most part, Canadian agencies are waiting for government or public health authorities to take the lead on whether to require masks.

“Eventually, you know, social distance defined as two metres will just not be possible [on transit],” warns Jarrett Walker, an Oregon-based consultant and author of the book Human Transit. “I think that it’s quite likely some basic hygienic behaviours like mask wearing may be required for a long time.”

Finally, there will be major communications campaigns to drive home the efforts agencies are making to keep their vehicles and stations clean. Expect messaging to highlight cities such as Seoul – which has a heavily used subway system but has been spared a serious COVID outbreak – to illustrate that transit itself is not the risk factor.

“I think we need publicity campaigns to ensure that people feel safe, that these issues are being thought about and we need some imagination to encourage people back,” Mr. Wolmar said.

The agencies do have a bit of time to figure all this out. Even though jurisdictions across Canada are starting tentatively to open up, it is unlikely that everyone will rush back to their work places. Some who have been working from home will continue to do so. Major sports, concerts and cultural events have also been cancelled this summer, eliminating these sources of ridership spikes.

“The big question for us is what [service levels] do we actually schedule for September,” said the TTC’s Mr. Haskill, adding that this decision will be informed by city data and provincial advice.

“We would say that’s really our short-term sort of work. And we’re looking in the longer term than that. What do we schedule after we have some experience with September? What would we schedule in January? And then, maybe even the long term might even stretch out to the end or the last part of 2021, if it takes that long to get back.” 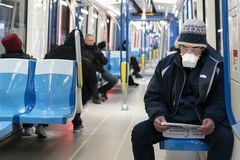 Potential rise in post-crisis car use and loss of transit routes puts cities at a crossroads
May 7, 2020 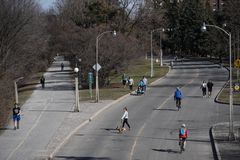 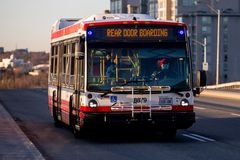