There was despair and elation in northeastern Nova Scotia on Saturday as the fallout of a pulp mill’s coming closure started to ripple through communities and families across the region.

Premier Stephen McNeil announced on Friday he would keep a pledge that Northern Pulp wouldn’t be permitted to continue piping its effluent into Boat Harbour, near Pictou Landing First Nation, after Jan. 31.

Within an hour, the company announced the closure of the mill in Abercrombie, N.S., and predicted the loss of thousands of forestry jobs.

For Warren Francis, a lobster fisherman, and his sister, Chief Andrea Paul, this was a long anticipated moment.

The fisherman stood beside the remnants of celebratory fireworks on Saturday, and thought of his ancestors.

“They would be overjoyed,” he said. “They were around when Boat Harbour was clean and pristine.”

Paul said the premier’s gesture should be seen by other Canadian leaders as a powerful act of reconciliation with Indigenous peoples.

“The community is excited . that they’ve been heard and validated and acknowledged,” she said, moments after a large eagle flew over her head.

However, in nearby New Glasgow, Northern Pulp co-workers Kim MacLaughlin and Wanda Skinner say they are fearful for their families’ well-being.

MacLaughlin and her husband Derek – who is a wood harvester – both are facing lost income because of the closure, while Skinner, who is a single mother, wonders how she’ll support her daughter.

“I haven’t slept, I haven’t eaten, I’m exhausted,” said MacLaughlin, sitting in a coffee shop. “I’m crying one minute and I’m angry the next minute.”

MacLaughlin, who has worked in the stores division of the mill for 13 years, said with both her husband’s and her income ending, they have to assess whether they can stay in the province.

Skinner, 54, said the loss of the mill and her livelihood feels like “a death” after 35 years working in the mill.

“We’re grieving. That’s what it feels like. … and the young workers who set roots in rural Nova Scotia, now their hopes and dreams are gone.”

She reaches over to hug her co-worker as tears well up.

McNeil has said he realized his decision not to grant Northern Pulp an extension would cause pain to families dependent on the income it provides.

He has announced a $50-million forest industry fund that will be used for retraining, education and emergency funding for workers in immediate need of help.

On Friday he said the Liberal government “will help and support” workers in their transition.

Don MacKenzie, the president of the Unifor local that represents more than 300 Northern Pulp workers, said this will be only a fraction of what’s needed to help the rural economy recover.

“I see a lot of devastation in their faces, a lot of tears and … a lot of apprehension as people don’t know what the future holds,” he said.

McNeil has said the company has had five years under 2015 legislation to come up with a way to cease putting its waste into Boat Harbour, yet is still far from a solution.

The mill, in operation since 1967 under various owners, has faced consistent criticism for its poor environmental record.

It has been dumping treated effluent into lagoons near Pictou Landing for decades, and successive provincial governments have reneged on promises to clean up the once-pristine estuary.

The company had submitted plans to build a pipeline to pump 85 million litres of treated effluent daily into the Northumberland Strait as part of its proposed effluent treatment system.

But the government twice told the company it had failed to provide enough information to allow for a proper assessment of the plan’s impact on human health and the environment.

Fishermen in Nova Scotia, Prince Edward Island and New Brunswick said a pipeline would hurt the local lobster fishery, as well as other smaller fishing enterprises.

Michelle Francis-Denny, the Pictou Landing First Nation community liaison for the remediation of the Boat Harbour lagoon, said it has been a time of high emotions.

“We just cried all the way through it,” she said, standing near the band office.

The 41-year-old said her community “knows all too well what it’s like to have a livelihood threatened,” and she is feeling sadness for workers like MacLaughlin and Skinner.

But she says the community’s focus will now shift toward finding a viable way to remediate its polluted lands.

“In the end we hope to have A’se’k back again,” she said, using the Mi’kmaq word for the Boat Harbour lagoon.

She visited her late grandfather Chief Louis Francis’ grave on the evening of the premier’s decision. Francis took the decision to allow the effluent treatment facility after being given false promises about the nature of the waste water, she said.

“After the big moment I went right to the graveyard, and I told my grandfather, ‘You can rest peacefully now,“’ she said, her voice breaking. 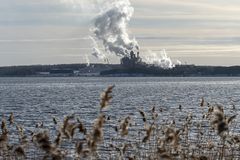 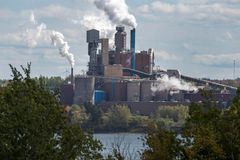