Investigators are not revealing how much dirty money was allegedly laundered through businesses connected to the Figliomeni crime family after the arrests of senior members last week, but experts say the fact that casinos were used is a surprising choice given the level of regulation in provincial gaming.

Last week, York Regional Police announced they had arrested eight men and one woman in a sweep that caught the alleged boss, 56-year-old Angelo Figliomeni, in the organization, which they say laundered more than $70-million in Toronto-area casinos.

Police officers have around-the-clock presence in Ontario casinos, a model recommended for adoption in British Columbia last year following a scathing report that exposed how Vancouver-region casinos were “laundromats for the proceeds of organized crime.” Because of provincial safeguards, Ontario is a different story.

“Fortunately, with casinos, a lot of that information is tracked and it helped us,” Detective Sergeant Carl Mattinen, of the Special Operations Bureau, said in an interview.

The document breadcrumb trail left by cash transactions is reinforced with further evidence from wiretaps during the investigation, dubbed Project Sindacato.

“Specifically, as it relates to the money laundering, they’re not as guarded,” compared to when discussing overt crimes, Det. Sgt. Mattinen said, including “violence, or any decisions [that] they know are black-and-white illegal.”

Although $70-million was washed inside legal casinos alone over about five years, the lead investigator says the gambling vehicle was not any more prevalent than other means allegedly used to clean money.

Members of the Figliomeni crime group came to the casinos nightly with $30,000 to $50,000 in tow. They would not use straw men, Det. Sgt. Mattinen said of the suspects, who liked to gamble. Instead, they brought along a trusted, core group from the organization, and would lose a fraction of their cash in the casino – whether intentionally or not – allegedly pocketing the rest as legitimate wins.

That type of gambling pattern, coupled with large cash transactions, would tend to generate a report to the Financial Transactions and Reports Analysis Centre of Canada (FinTRAC), said Matt McGuire, an expert in financial crime and anti-money laundering.

“The casino was just a weak link in their whole plan,” said Mr. McGuire, co-founder of a consultancy firm called the AML Shop, based in Toronto.

Where Ontario casinos appeared to be a “poor choice” for the Figliomeni operation, he said they seemed to have succeeded through establishing other ventures such as finance companies, which are not legally required to report or monitor irregular transactions.

“Similarly, they [allegedly] set up a charity, which is a hallmark of a very professional money-laundering scheme,” Mr. McGuire said.

Salvatore Oliveti, one of the men charged, is the founder and chair of Rev It Up, a fundraiser that supports SickKids Hospital. Erica Quintal, 30, is listed as a member of the charity’s “sponsorship team.” Ms. Quintal was also arrested.

Mr. Oliveti, of Oakville, is the co-owner of Option B Solutions, a car-loan company that was identified by police during a news conference last Thursday. In an interview with The Globe and Mail, Det. Sgt. Mattinen said that a “high amount of money” was allegedly laundered through Option B Solutions, but would not provide a number.

Police also seized $35-million in assets during the raids, including 27 homes, 23 luxury vehicles and 11 illegal gambling dens that operated out of cafés. People who may have been renting their homes from the suspects have not been evicted.

Other businesses, including real estate and construction companies, are still being investigated by police as part of the probe.

The ‘Ndrangheta has “strong roots in Toronto,” says Antonio Nicaso, a lecturer at Queen’s University and author of more than 30 books on the Mafia.

“The most important aspect of this investigation is the seizure and confiscation of assets," he said, adding it is “what truly will make a long-lasting impact of any criminal group.” 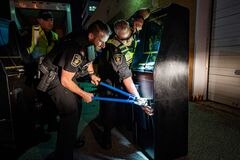