A McGill University report stops short of recommending the school drop the contentious name of the Redmen sports teams, but says that an act of “renaming” may be seen as a gesture of reconciliation.

“When a name has become problematic, renaming is not the first option. In some cases, renaming may be the sole satisfactory measure,” says the report released on Friday, which wades into a heated debate on campus.

McGill joins other universities across North America in trying to reassess historical names whose legacies clash with modern sensibilities. The issue has boiled over with the name of McGill’s varsity teams, which some Indigenous students and some faculty members found offensive.

While the report by an internal working group steers clear of taking a definitive stand, it says the school should consider a name change “if the harm of keeping a name outweighs the good.”

“A practice or name that is offensive, or that over time has become offensive, may produce harm,” says the report. “Used judiciously, renaming may acknowledge lessons from history and gesture towards reconciliation.”

A major campus building is named for Canadian author Stephen Leacock, who taught at McGill. Mr. Leacock is described in the Canadian Encyclopedia as “at times racist, anti-feminist and downright ornery.”

The McGill report says names and images on its campuses, including sculptures and painted portraits, “may form, collectively, a museum of privilege.”

“A number of participants in our consultations spoke of the McGill environment as embodying not only white privilege, but also white supremacy,” the report says.

Students voted 79 per cent in favor of dropping the team name in a referendum last month.

During consultations, one Indigenous varsity athlete said “seeing the Redmen jerseys in the gym felt like a dagger and that being called a Redman makes him sick.”

Others vowed to never donate to McGill again if the name is changed.

The university is expected to make a decision next month.

“Bringing McGill’s commemoration and naming practices into line with contemporary social, political, and ethical standards will be challenging,” the report says. “In some cases, it will be controversial.”

It warns that several people voiced a sense of “fatigue and cynicism” because McGill has not acted on previous calls for change.

In an interview, Michael Nelson, a former captain of the Redmen hockey team and president of Friends of McGill Hockey, said he would have liked the report to note that the name has been disassociated from Indigenous imagery since the early 1990s, and that some Indigenous people support keeping it.

“I hope that we’ll keep the name and we’ll explain in detail the history,” he said. “McGill has to make its best efforts to make a good, reasoned decision.”

Tomas Jirousek , a McGill student who has led protests against the name, said he was pleased that the report “clearly recognizes McGill’s wrongs toward Indigenous communities.”

“McGill has an obligation to rectify those wrongs,” said Mr. Jirousek, a member of the Kainai Nation in Alberta. “This shows that the university has a choice to make between money, and donors, and Indigenous students. And I sincerely hope McGill values Indigenous students and reconciliation above that of a few donors.”

McGill has a long athletics tradition, and some see it as misguided to abandon a name that originated in the school’s colors and carries a long history of pride and team spirit. Others say it is inappropriate to use a team name that has Indigenous connotations and has been embedded with Indigenous imagery in the past.

The name emerged in the 1920s, when sports teams across North America were choosing Indigenous names, said Suzanne Morton, a history professor at McGill who researched the team name. “All teams have colours. But there’s no sports team called the Goldmen or the Greenmen. Redmen made sense because it was a name that was used in the context of the sports culture at that time,” she said.

As early as the 1930s, major Canadian newspapers wrote about the teams using phrases such as “on the warpath.” More explicit images appeared after the Second World War, including logos of stylized Indigenous figures on football helmets.

“I was shocked at how explicit the visual images were,” Prof. Morton said. “If you look at what happened, I don’t see how you can come to any other conclusion: It [the name] has a long connection to Indigenous images.”

A report to the McGill athletics board in 1992 linked the name and the university’s Celtic heritage, in a nod to James McGill’s Scottish roots. However, Prof. Morton says she could find no sources establishing a Scottish link. “There’s no evidence that anyone has turned up.” 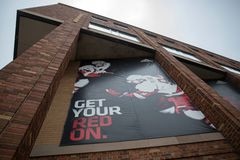