For the past year Rusty has ambled instead around the countryside just west of Montreal, the Belgian’s blond mane flowing as he gambols around a farm. He still thrills visitors, but without harness and carriage or any load.

One year ago, Montreal banned the trademark horse-drawn carriages that once parked in front of Notre-Dame Basilica after a years-long campaign by animal rights activists. Since then, at least half a dozen of the horses have gone to farms either for retirement or to newly adopted homes.

Over the past year, five of those horses including Rusty, Maximus, Freddy, Ulysses and Blanco arrived at A Horse Tale Rescue, a charitable rescue stable just west of Montreal.

Every Tuesday morning Rusty greets Darlene Job as she arrives to muck out his stall at his Horse Tale retirement home. Ms. Job is an educator in Montreal’s child protection system. She comes to Horse Tale to shovel manure and get away from it all.

“When I’m there, I’m just in a different space. I’m shovelling [manure], touching horses. Today I groomed them, cleaned up a stall, moved hay out of storage,” Ms. Job said. “I get outdoors. I’m a farmer at heart, so being around the barn, the horses, the sounds, the smells, it relaxes me.”

Ms. Job started volunteering regularly earlier this fall when Horse Tale started calling on workers in high-stress roles related to COVID-19 response to spend time with the horses. Not everyone shovels manure, like Ms. Job. For many it is as simple as walking or petting the horses.

The former carriage horses, who spent their working lives surrounded by traffic and crowds of people, are particularly well suited to the job, according to Horse Tale executive director Mike Grenier.

“They don’t spook,” Mr. Grenier said. “They’re massive but super easy to be around, so used to having people around them. It’s a joy to see them helping humans by their mere presence after all those years of work.”

The move to ban Montreal’s horse-drawn carriages, known in Quebec by the French word, calèches, gained momentum after incidents including an accident involving a car and a horse and another in 2018 when a horse dropped dead mid tour.

Montreal’s horse carriage ban came into effect on Jan. 1 and offered $1,000 compensation to owners for every retired horse. The city has only paid out for two horses, partly because some owners contest the ban and refuse to take money from the city.

Luc Desparois, who at the height of the industry operated 28 horses but is now down to seven, is working on an legal appeal to try to defeat the law despite previous failed attempts.

Mr. Desparois has sent horses to Horse Tale and sold some to carriage operators in Ottawa and Quebec City while seven others remain at the downtown stables. Mr. Desparois occasionally trucks them out of town where it remains legal to use them for weddings, sleigh rides or other events. The collapse of the tourist industry with COVID-19 has created more uncertainty for working horses. “Everything has slowed down,” Mr. Desparois said.

The horses that remain downtown are “still giving people pleasure,” Mr. Desparois said. “People come to visit them in the yard with their carrots and apples. But after 20 minutes walking around a field or eating apples, they’re bored. They’re used to working.”

Mr. Grenier recently expanded Horse Tales to have capacity for 20 horses and currently houses 13. Care for the horses costs about $10,000 each per year and is covered through donations. About 95 volunteer workers provide much of the care.

Fundraising has become a challenge with COVID-19 restrictions. “Without our barbeques and open houses, we’ve had to be creative,” Mr. Grenier said. “But they never go without. If they have a need, we find the money.”

The oldest horses are around 30 years old – about 90 in human years – while younger ones are occasionally adopted out to new homes after a lengthy screening process, and continuing supervision. Freddy, a 10-year-old Percheron, left the stable in November for a permanent home with a veterinarian who rides him, Mr. Grenier said. “Freddy is young and has opportunities,” he added. “For others, this is their forever home.”

The horses all eventually come to the end of their lives and are euthanized on the farm by a veterinarian when their quality of life deteriorates. “They’re our babies so we make sure it’s done properly,” Mr. Grenier said. “We make sure they have the best kind of life, from when they arrive until the end.”

In the meantime, they earn their keep giving comfort and purpose to people such as Ms. Job. “They are having a nice retirement in their pasture,” she said. “I’m going to retire next year too, so I’ll be happy to have this activity up my sleeve, to be with them.”

Renewed calls for ban on caleches after horse collapses in Old Montreal
September 5, 2017 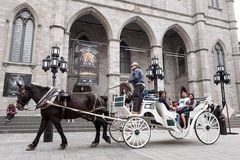 Montreal's mayor announces new rules for horse-drawn carriage rides
June 7, 2017
Follow Les Perreaux on Twitter @Perreaux
Report an error Editorial code of conduct
Due to technical reasons, we have temporarily removed commenting from our articles. We hope to have this fixed soon. Thank you for your patience. If you are looking to give feedback on our new site, please send it along to feedback@globeandmail.com. If you want to write a letter to the editor, please forward to letters@globeandmail.com.
Comments