The Nature Conservancy of Canada is eyeing an expanse of Ontario woodland more than twice the size of Toronto in hopes of turning it into the country’s largest privately protected natural space.

In an Earth Day announcement on Friday, the organization launched a public campaign to raise funds for the purchase of three large tracts of boreal forest. They are located to the east and south of Hearst and cover 1,450 square kilometres – a combined area that is greater than all but the largest of Ontario’s provincial parks.

The property, which has been held for more than 50 years by the pulp and paper company Domtar Inc., includes more than 100 lakes and 1,300 kilometres of rivers and streams that are part of the Hudson Bay watershed. It provides habitat for a wide array of native species, including large mammals such as lynx, black bear, wolf and moose, and its least disturbed reaches are also thought to host woodland caribou, among other species at risk.

“When we work at this scale, habitats are connected by protecting entire natural systems,” said Catherine Grenier, president and chief executive of the Nature Conservancy, during a virtual news conference alongside federal and provincial environmental ministers to unveil the project. 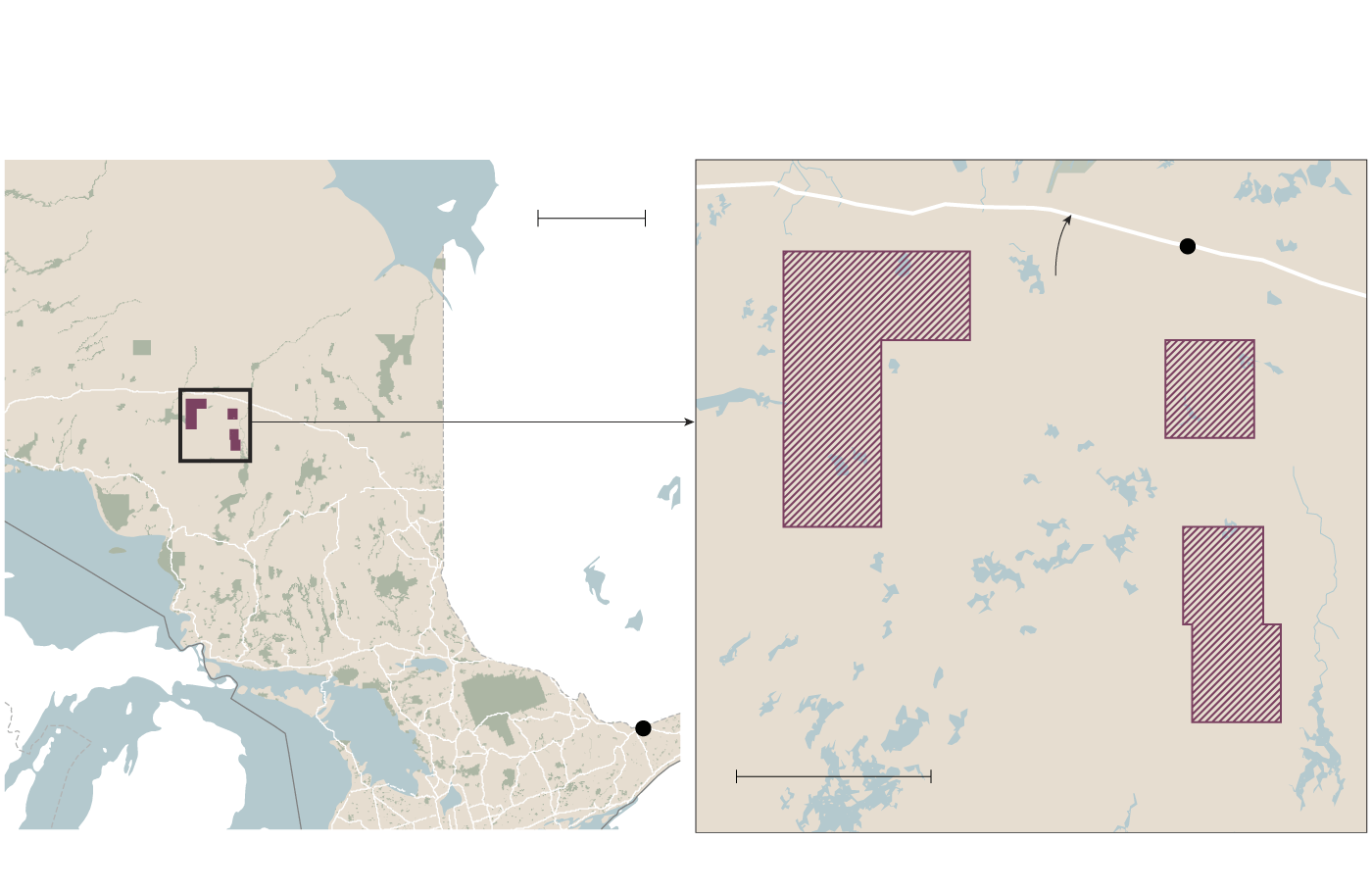 If successful, the organization said it would implement a management plan for the property that provides for the long-term viability of native species and ecosystems in co-ordination with Indigenous groups in the region. It would also add to Canada’s inventory of protected lands in a region that is considered crucial because of its ability to store large quantities of carbon in soil and peat – which helps combat climate change.

Both Ottawa and Queen’s Park have pledged to support the purchase of the property, which Domtar has offered to sell at a discounted price. The Nature Conservancy said it has now raised $33-million in combined public and private funding toward the purchase. The goal of the fundraising campaign is achieve an additional $13-million that’s necessary to complete the deal.

“This is our call to Canadians and people around the world,” said Kristyn Ferguson, a program director with the Nature Conservancy.

She added that the project’s contribution to carbon storage offers an opportunity for donors to support conservation with a global impact. Nature Conservancy estimates the property holds an amount of carbon equivalent to the lifetime emissions of three million cars.

Ms. Ferguson said discussions around the purchase began about a year and half ago, after a process she undertook to identify places in Ontario where a large acquisition might yield the greatest benefits for conservation.

The area near Hearst “stood out like a beacon,” she said, because of its wetlands and other natural assets. She said she reached out to Domtar and discovered the company was interested in selling land there.

Rob Melton, a senior vice-president with the company said that no part of the areas that are being considered for purchase have been harvested in more than a decade.

“We felt like the opportunity to participate in this project with NCC was actually of more value to Domtar” than retaining the land for future harvest of wood for pulp and paper, he said.

While the land would constitute the largest purchase in the conservation group’s history, it still only amounts to about 1 per cent of the land Ontario needs to protect to meet international biodiversity commitments.

Canada has pledged to set aside 25 per cent of its total land and waters for nature by 2025, and 30 per cent by the end of the decade, to help address a looming global biodiversity crisis that has put large numbers of species at risk of extinction because of habitat loss, among other factors. In Ontario, protected areas currently cover less than 11 per cent of the province. Roughly 150,000 square kilometres of additional protected land would be required just to achieve the 2025 target.

“We need to have all the opportunities on the table,” said Julee Boan, the boreal program manager for the conservation organization Ontario Nature.

Earlier this week, Ontario Nature sent MPPs a document identifying hundreds of wooded areas and thousands of wetlands that are candidates for protection. The sites, which are found in nearly every riding in the province, amount to more than 100,000 square kilometres. They also include areas certified by the Forestry Stewardship Council, an international body that requires forestry companies to protect at least 10 per cent of the forests they manage in order to receive a green designation on their products.

According to the document, the biggest opportunities for conservation lie within the Crown land that covers 87 per cent of Ontario. It also says that many Indigenous communities have proposed or expressed interest in managing conserved lands in accordance with traditional practices, but that the province has no formal process for recognizing them.

The document calls on provincial politicians to support a renewed effort to add and extend parks and protected spaces, similar to what was done in 1999 under the government of premier Mike Harris with an initiative known as Ontario’s Living Legacy.

During the Friday news briefing, David Piccini, Ontario’s Minister of the Environment, Conservation and Parks, said the province was ready to go further in protecting nature spaces. He stressed the importance of industry partners among the stakeholders who must work together to achieve conservation goals.

“You can’t turn a blind eye and treat the private sector as an ‘other,’” he said. “You need to open the doors and bring them in.”