St. John's
The Canadian Press
Published May 15, 2021 Updated May 15, 2021
For Subscribers
Comments
Text Size
Please log in to listen to this story. Also available in French and Mandarin. Log In Create Free Account

A Newfoundland and Labrador police officer was found guilty Saturday of sexually assaulting a young woman while he was on duty in 2014, bringing a long-awaited end to a gruelling case that was tried in court three times.

A jury delivered the verdict on Saturday afternoon, after deliberating for more than a day in the case of Royal Newfoundland Constabulary Const. Carl Douglas Snelgrove, who they found sexually assaulted the 21-year-old woman in her living room after driving her home from a St. John’s nightclub in his police car.

Upon hearing the verdict, she leapt out of her chair and ran over to the prosecution team.

Outside the courtroom, Crown prosecutor Lloyd Strickland said he’s glad the case is finally over, especially for the complainant.

“I’m very much in awe over her,” he said. “She remained constant while the system stumbled around her.”

Saturday was the end of Snelgrove’s third trial on the charge, following a successful appeal of an acquittal in 2017 and a mistrial last year.

The woman testified all three times, often shooting back at defence lawyer Randy Piercey while on the stand.

“You gotta know, this is this man’s life, right?” Piercey asked her at one point during her testimony on May 6, referring to Snelgrove.

“Yes, I do know that,” she quickly replied. “This has been six years of my life, as well.”

The trial began on May 5 in a makeshift courtroom set up in a former St. John’s school to accommodate physical distancing protocols.

The jury began deliberating on Thursday and delivered its verdict around 4 p.m. on Saturday.

The case has loomed over St. John’s since Snelgrove was first acquitted in 2017.

Enraged protesters gathered that night and yelled outside the stone Supreme Court building downtown. Demonstrations then spread across town to the Royal Newfoundland Constabulary headquarters.

The case also figures prominently in the structures of power and authority underpinning two recent, award-winning St. John’s-set novels: “All I Ask,” by Eva Crocker and “Small Game Hunting at the Local Coward Gun Club” by Megan Gail Coles.

“I think this case has moved the discussion around consent forward by light years,” author Lisa Moore told the Canadian Press in a Facebook message.

It has also moved the law around consent forward, the Crown prosecutor told reporters on Saturday.

In 2017, the court wouldn’t let him argue that Snelgrove abused his position of authority as a police officer and thereby nullified any consent the woman may have provided, if she provided it at all, Strickland said. It was on that point that his office appealed and won.

Snelgrove then challenged that appeal with the Supreme Court of Canada, but the court sided with Strickland, thus opening the door for further arguments on those grounds.

“In four years, which has been a very long time for her, but in the bigger sense is not a great deal of time, we’ve seen this shift,” he said. “I think it is an important case in that respect.”

Even before the verdict was read Saturday, people were gathered outside the Supreme Court building on Duckworth Street, holding signs and chanting in support of the woman, who they’ve called “Jane Doe.”

“As a survivor of sexual abuse myself, I see a lot of myself in Jane Doe,” said Sarah Saint-Clare, who brought a box of communal Timbits for the demonstrators to share. “Cases like this (are) why people don’t go to the police.”

Her father, Bill Janes, was the chief of the Royal Newfoundland Constabulary during Snelgrove’s first trial, and that meant she couldn’t join the protests back then, though she said she wanted to.

He’s since retired, and she was at the courthouse Saturday morning by 10 a.m. to hoist her sign and raise a fist in solidarity with the woman.

“Hopefully, if this comes back guilty, it will bring back the confidence that women have had in the past when it comes to reporting their assault,” she said.

Snelgrove will be back in court in June for the judge to set a date for his sentencing.

This report by The Canadian Press was first published May 15, 2021. 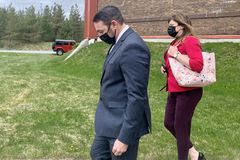 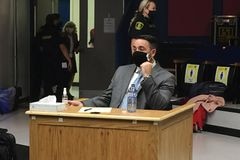 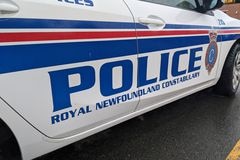