Ontario’s child-care centres will be able to open as early as Friday with strict guidelines for physical distancing and cleanliness, although some operators say they simply won’t be ready.

Premier Doug Ford’s government revealed its child-care plan on Tuesday, after announcing the province will pursue a regional approach to reopening many businesses and services starting on Friday.

Although the Toronto area and some other regions have not yet been given the green light to move onto Stage 2 of the plan to gradually lift the COVID-19 lockdown, child-care centres will be allowed to open across the province. Summer day camps are also permitted.

“We need to make sure supports are in place so people can have peace of mind going back to work," Mr. Ford said on Tuesday.

The association representing early childhood educators, however, called the announcement vague and said child-care centres were given no notice and no promises of adequate funding to prepare.

“This is not the safe, sustainable plan we called for,” the Association of Early Childhood Educators Ontario said in a statement.

Child-care centres and home daycares that reopen must adopt strict rules. They include: limiting the number of children and staff to groups of 10 or fewer, daily screening for COVID-19 symptoms, increased cleaning and not allowing any visitors.

Parents dropping off and picking up their children must adhere to physical-distancing rules. Toys that “can easily spread germs” must be removed, said Education Minister Stephen Lecce.

Mr. Lecce said some parents may not want to send their children back to child-care centres right away, but they won’t lose their spots or be forced to pay to hold them.

He also said the province is increasing penalties for non-compliance and boosting inspectors.

Some daycare owners, however, said they weren’t given enough information to comply with the strict new measures by Friday.

Kim Yeaman, who runs two school-based daycares in Innisfil, about 100 kilometres north of Toronto near Barrie, said she did not receive any notice of the announcement.

“The document should have been in our inboxes three weeks ago so that we could have planned and been open on Friday,” said Ms. Yeaman, past president and current board member of the Association of Day Care Operators of Ontario.

“We will not have enough capacity in our centre to accommodate all of the parents that need care."

She said she still has unanswered questions about staff ratios and costs of personal protective equipment, and has not yet received previously promised provincial funding to help keep daycare centres afloat.

Linda Starr, vice-president of sales and marketing for Kids and Company, which operates approximately 50 daycares in Ontario, said her company is planning to have many centres open by Friday.

Five of the company’s Ontario daycare centres have been open throughout the pandemic to provide emergency daycare for front-line and essential workers, Ms. Starr said.

The practices at those centres, from screening staff and children to enhanced cleaning protocols, will be put in place at the company’s other daycares in the province.

But she said limiting children and staff to groups of 10 people may pose financial and logistical hardships for many daycares.

“There’s going to be some challenges for certain providers, for sure," she said.

The Ministry of Health also released an eight-page guideline for summer day camps, which includes physical-distancing and mask-wearing protocols, and even policies for nap times.

The province has already cancelled overnight camps, but some summer day camps have already decided to bow out.

Claudia Sjoberg, president of Pedalheads, which offers bike, swim and sports camps across the country, said her company will institute several health and safety measures when it opens its day camps in Ontario.

"Parents are nervous,” she said. “But we also know that parents want their kids in activities.” 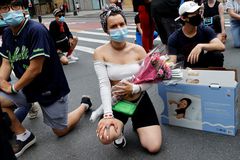 Quebec says 41 students and staff tested positive for COVID-19 since reopening
May 29, 2020

Follow Laura Stone and Dave McGinn on Twitter @l_stone @Dave_McGinn
Report an error Editorial code of conduct
Due to technical reasons, we have temporarily removed commenting from our articles. We hope to have this fixed soon. Thank you for your patience. If you are looking to give feedback on our new site, please send it along to feedback@globeandmail.com. If you want to write a letter to the editor, please forward to letters@globeandmail.com.
Comments