Some Toronto hospital employees who don’t treat patients wound up receiving COVID-19 shots before more vulnerable groups because the Ontario government and the retired general leading its vaccination campaign directed hospitals to prioritize “speed over precision,” according to the president of the country’s largest research hospital.

In a message sent to all staff on Monday, University Health Network president Kevin Smith explained how employees who don’t work on the front lines got the chance to be inoculated after another hospital – Southlake Regional Health Centre in Newmarket – offered UHN 1,000 last-minute slots at its vaccination clinic on Sunday.

“We started with priority groups, then moved to anyone patient-facing and then, through leaders, sent a call to others at UHN,” Dr. Smith wrote in an e-mail obtained by The Globe and Mail. “Based on direction from the province and General [Rick] Hillier of choosing speed over precision, our approach remains focused on getting vaccines into arms ASAP and to waste no doses.”

A spokesman for the Ontario Ministry of Health said although long-term care and high-risk retirement homes are the “current key priority,” the province is encouraging hospital vaccination clinics to offer leftover doses to others on site if someone with a booked appointment cancels, rather than letting a dose go to waste.

The Globe and Mail reported on Monday that UHN was one of at least a handful of Ontario hospitals offering the COVID-19 jab to employees who don’t interact with patients, including administrators and researchers, despite tens of thousands of vulnerable long-term care residents in the province still awaiting their first shot.

Dr. Smith said in an interview that Gen. Hillier has been clear that “speed is an essential ingredient” in the vaccination campaign. After vaccination clinics were shut down for two days over the holidays, “the General was extremely explicit,” Dr. Smith added. “He said, ‘I want no delays. I want needles in arms.’”

That said, Dr. Smith said UHN did everything it could to discourage employees who don’t interact with patients from registering for last-minute spots at the vaccination clinic in Newmarket on Sunday, including sending out e-mails saying that only front-line staff and researchers working on COVID-19 were eligible. Bookings were open to staff at UHN hospitals as well as four other downtown hospitals, he added.

“Unfortunately, what we can’t tell you is exactly how many and from where [booked appointments]. This whole system, frankly, is predicated on an honour system.”

Premier Doug Ford and Gen. Hillier came under fire last week for a slow start to the coronavirus immunization campaign, including from Prime Minister Justin Trudeau, who said he shared the public’s frustration at the thought of vaccines languishing in freezers.

Mr. Ford and several other premiers retorted that the problem was a looming shortfall in supply. Procuring vaccines is a federal responsibility.

The pace of immunizations in Ontario has picked up considerably since then, particularly in long-term care homes in areas of the province hit hardest by the novel coronavirus.

However, most of the residents in nursing homes outside the Greater Toronto Area and Windsor have yet to be offered a first shot. Vaccination blitzes inside nursing homes in other Ontario cities, including Hamilton and London, picked up steam Monday.

The provincial government set a goal of Jan. 21 for injecting the first shot of a two-dose regimen to all residents, staff and essential family caregivers at nursing homes in Toronto, Peel Region, York Region, and Windsor and Essex County.

Windsor has beat the target, having already delivered a first round of vaccinations inside all 19 local long-term care homes, Theresa Marentette, chief executive officer of the Windsor-Essex County Health Unit, said Monday.

York Region, north of Toronto, was on track to finish offering first doses of COVID-19 vaccines inside all 28 of its long-term care homes by the end of the day Monday, a spokeswoman for the region’s public-health unit said. In Peel Region, vaccines have been offered inside 18 of 28 long-term homes so far.

Toronto, meanwhile, is close to completing first-shot blitzes in all of its nursing homes as well, Medical Officer of Health Eileen de Villa said.

UHN has finished offering a first round of COVID-19 shots inside all its partner nursing homes and high-risk retirement homes, Dr. Smith said.

Toronto also announced Monday that it would open a vaccination centre at the Metro Toronto Convention Centre on Jan. 18, months earlier than originally planned.

The operation is meant to vaccinate front-line health care workers who don’t work in hospitals, such as shelter workers, while also serving as a proof of concept for the mass immunization clinics the city plans to run when more doses of COVID-19 vaccines are available in Canada.

Ontario had administered 131,055 doses of COVID-19 vaccines as of 4 p.m. ET Monday, including nearly 8,000 doses inside long-term care, the Ministry of Health said in a statement. (That figure is an underestimate because some paper-base reports still have to be entered in the province’s database.)

The federal government had facilitated the delivery of 196,125 doses of COVID-19 vaccines to Ontario as of Jan. 7.

Samantha Hill, president of the Ontario Medical Association, said she sympathized with hospital officials spearheading the complex rollout of COVID-19 vaccines. But for burnt-out family doctors seeing patients in the community – without any idea when they’ll be vaccinated – hearing non-front-line hospital staff have been inoculated “is a bit of a kick when you’re already down.” 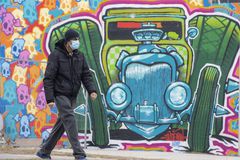 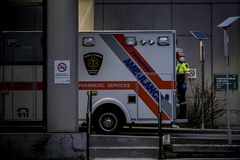 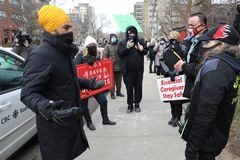