Ontario is following Quebec in calling for military assistance in long-term care facilities as the death toll in the two province’s nursing homes continues to rise.

The requests – the first for Ontario, and the third for Quebec – come as both provinces report staggering mortality rates for COVID-19 in long-term care facilities. The official death toll in Quebec reached 1,134 on Wednesday, with more than 80 per cent of the province’s deaths in long-term care homes.

In Ontario, almost 70 per cent of all deaths have occurred in long-term care, according to the latest data. Provincial health officials said Wednesday 447 long-term care residents, as well as a staff member, have died of COVID-19. The province has recorded 659 deaths in total, and there have been outbreaks in 127 long-term care homes.

Long-term care in Quebec is a real-life horror story

Ontario Premier Doug Ford said Wednesday he is sending a formal request to the Canadian Forces, as well as to the Public Health Agency of Canada, to help in five of the hardest hit long-term care homes in the province.

Quebec Premier François Legault, who first asked Ottawa for military aid last week, said the province wants an additional 1,000 soldiers, even if they don’t have medical training, to bolster the 130 personnel who started to arrive at nursing homes there on Monday.

Mr. Ford said military personnel will support the “day-to-day operations" of the homes, including co-ordination and medical care. He would not identify the five homes. David Williams, Ontario’s Chief Medical Health Officer, later said the province was looking for about 250 personnel.

“I’ve never been reluctant to call for help," Mr. Ford said at Queen’s Park. “Our front-line heroes are working around the clock, many working longer days and extra hours. They need a rest and they need support.”

Mr. Ford again expressed frustration at his own health officials for a lag in testing. In a new memo, the province directed its local public-health units to develop a plan to test everyone in long-term care for COVID-19, acknowledging the “prevalence” of the virus among staff who don’t show symptoms. Mr. Ford said he’s been calling for more testing for the past two weeks, but he’s taking advice from his medical experts.

“Do I get frustrated? A hundred per cent,” Mr. Ford said. “As much as people may think I can jump in there and overturn what the Chief Medical Officer says, I can’t.”

In Quebec, long-term care homes were understaffed before the pandemic. Illness and absenteeism left them short 2,000 people, out of about 43,500 employees normally working in those facilities.

A series of calls for volunteers among medically trained personnel, including retirees, instructors and specialists, only managed to fill half the gap.

“The situation in seniors’ residences is still critical. Today we asked the federal government to send us a thousand soldiers. It will give us more resources to help us with non-medical tasks,” Mr. Legault said Wednesday.

“It’s not ideal but, at the same time, I think this will help."

A spokeswoman for federal Public Safety Minister Bill Blair said Ottawa is working closely with the two provinces “as they identify their specific needs.” Spokeswoman Mary-Liz Power said: “We will carefully review their requests upon reception and determine next steps.”

One of the homes, Anson Place Care Centre in Hagersville, west of Toronto, is among the hardest hit in Ontario with 27 deaths. Of the 74 remaining residents, 44 are sick.

Ian Dick, a lawyer for Rykka, told Ontario Superior Court Justice Edward Morgan that Anson Place is exempt from a provision requiring sick residents to be segregated from healthy ones because it is a small home.

The Ontario Ministry of the Attorney-General intervened at the hearing to defend policies governing the appropriate use of N95 masks in long-term care homes.

On March 10, Public Health Ontario said nurses treating residents in long-term care homes with COVID-19 should use surgical masks rather than the N95 version.

The ONA’s chief executive officer, Beverly Mathers, says in an affidavit she was “shocked” by Public Health Ontario’s advisory on masks.

The other two homes owned by Rykka are Eatonville Care Centre, the hardest-hit long-term care residence in Toronto with 36 deaths as of Wednesday, and Hawthorne Place Care Centre in North York.

In Quebec, those still working in long-term care have also complained that they were not issued with enough protective gear and that infected patients were not properly isolated into separate zones. 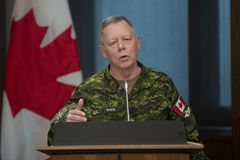 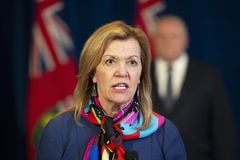 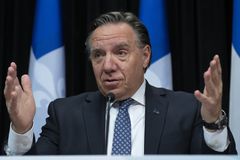 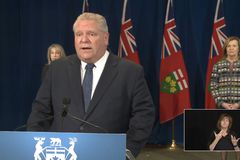 Follow Laura Stone, Les Perreaux and Karen Howlett on Twitter @l_stone @Perreaux @kahowlett
Report an error Editorial code of conduct
Due to technical reasons, we have temporarily removed commenting from our articles. We hope to have this fixed soon. Thank you for your patience. If you are looking to give feedback on our new site, please send it along to feedback@globeandmail.com. If you want to write a letter to the editor, please forward to letters@globeandmail.com.
Comments