Ontario’s four education unions have filed a labour board challenge over the province’s school plans, saying the Ford government has not adequately addressed health and safety concerns.

Premier Doug Ford shot back at the unions on Monday, portraying them as unco-operative and out of touch – part of an escalating war of words that has been going on for weeks.

The four unions, representing more than 190,000 teachers and education workers, filed formal appeals on Monday with the Ontario Labour Relations Board (OLRB). The unions say the government has failed to put in place “all reasonable precautions for a safe return to school,” particularly to facilitate physical distancing through smaller classes.

Starbucks to require customers wear masks in all Canadian stores, starting in mid-September

Legault warns uptick in cases could trigger second wave, shut down if Quebeckers not more vigilant

Union leaders said they don’t expect the appeals to interrupt the start of the school year, with some boards returning as early as next week with staggered schedules. But they want the labour board to issue provincial standards around ventilation, transportation, student cohorts and, particularly, physical distancing, which they say cannot be achieved in many schools under the current plans. Sam Hammond, president of the Elementary Teachers’ Federation of Ontario said one teacher recently informed him that she could only separate her students by 35 centimetres in her classroom – far from the widely recommended distance of two metres.

“We are concerned about how this is unfolding, with a week or two away from reopening of schools,” Mr. Hammond said in an interview.

“What the Premier continues to do is point the finger at big bad teachers unions, when in fact all of the concerns that we have raised consistently ... continue to be raised by every education stakeholder in the province.”

The province’s strategy will see students in kindergarten through Grade 8 return to school without any reduction in class sizes, although students will spend the day in a single cohort to limit contact with other children.

Most high schoolers will also be in class full-time, although students at some boards across the province will take many of their courses online in a bid to curb the spread of the novel coronavirus.

Mr. Ford said Monday his government has listened to the unions’ concerns and provided millions in funding for better ventilation and enhanced cleaning, and is allowing school boards to use reserve funds to hire more teachers. He said he supports teachers, and many have approached him to apologize for how the unions are acting.

“I’m begging now for the teachers’ unions to work with us,” Mr. Ford said. “Everything that you’ve wanted, we’ve given you ... I’m just asking, just once, for your co-operation.”

The Premier said outbreaks in schools are inevitable, with proper protocols in place to handle them – likening it to a team of “stormtroopers” moving in to ensure the correct procedures are followed.

“If [an outbreak] really starts taking off, I will not hesitate for a second to close these schools down,” Mr. Ford said.

Harvey Bischof, president of the Ontario Secondary School Teachers’ Federation (OSSTF), accused Mr. Ford of blaming unions in a “transparent attempt to deflect the focus on his government’s clear incompetence.” Some high schools are returning to part-time classes with 15 students, but other boards will be operating at capacity, he said.

“My members are overwhelmingly anxious, bordering on fear about the return. They are pleading with us to do everything we can to safeguard their health,” Mr. Bischof said. “And I can promise you that many of our members would like to see us recommend significantly more drastic action.”

NDP education critic Marit Stiles said it’s up to the OLRB to make a decision, but the overwhelming message she’s heard from parents is about the need for smaller class sizes.

“This mess, this chaos that we’re experiencing ... the fear and the lack of confidence in the government’s approach is at the feet of the Premier,” she said. 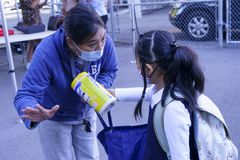 N.L. says parents will be allowed in schools on first day of kindergarten
August 30, 2020 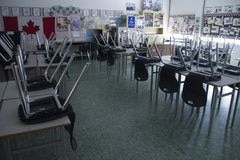