The Saskatchewan government is predicting the COVID-19 pandemic will result in a deficit of $2.4-billion but says it won’t cut programs and services.

Finance Minister Donna Harpauer tabled a full 2020-21 pre-election spending plan Monday after submitting only expense estimates in March. Officials said at the time that economic shutdowns to prevent spread of the novel coronavirus, along with a fall in oil prices, made it too unpredictable to properly forecast revenues.

The government now expects to take in $1.2-billion less than the previous year. It forecasts revenues to be at almost $13.7-billion, while spending is earmarked at $16.1-billion.

“The uncertainty for sure is how different countries open and how they open up their economies and their ability to purchase products,” Harpauer told a news conference.

“We have what the world needs and that has not changed … Food, fuel and fertilizer are still going to be our staples.”

Included in the budget is an extra $2-billion that Premier Scott Moe promised in May to add to the province’s existing two-year capital plan. It is to be spent on infrastructure projects and highway upgrades to create jobs and stimulate the economy.

Harpauer said the budget forecasts more than $500-million in new expenses related to programs to support people through the pandemic, including previously announced initiatives such as $50-million in help for small businesses. There is a provincial sales tax credit for people who purchase a newly built home.

The province said $200-million has also been set up as a contingency to deal with a possible resurgence of the virus later this year.

Harpauer emphasized that Saskatchewan is faring better than other provinces, in terms of people who have been able to keep working during the pandemic.

She characterized the shortfall as a “pandemic deficit” rather than a larger, structural one. And she added it’s smaller than what’s being looked at by other parts of Canada.

Saskatchewan is the first province to build a budget around the pandemic. It’s one of the largest deficits in the province since the early 1990s.

Harpauer said the province should see revenues rebound and the government will be able to return to balance in the coming years without having to slash programs and services.

She said a balanced budget may take three to four years, and she’s optimistic it can be done without increasing the PST.

“It’s not going to be easy” and there’s going to have to be restraint, she said.

While the government is committed to its collective bargaining agreements, there are likely going to be more zeros in future negotiations and hiring freezes could be on the table, Harpauer added.

Monday’s budget was presented without the fanfare usually seen with the unveiling of a government’s spending plan. It kicked off a three-week sitting of the legislature, where the assembly will be restricted to 15 members to adhere to public health orders.

Prior to the global health crisis, Premier Scott Moe had said his Saskatchewan Party government would be presenting a balanced budget with a modest surplus before a provincial election slated for October.

Preliminary figures released Monday show the 2019-20 fiscal year ending with a $319-million deficit because of economic deterioration in the last quarter.

Moe has said economic recovery is underway now that many restrictions around COVID-19 have been lifted, and the government is putting in place about a $1-billion worth of supports.

“We had corrected the structural issues within the budget here in the province,” he said Monday. “That will essentially put us back into, at some point in time, a budgetary balance.”

Opposition NDP Leader Ryan Meili had pressed the government to table a budget ahead of the election. He said it’s concerning that the forecasts don’t extend beyond next March.

“They are holding back a story that is so familiar,” he said. “They run on a sweetheart budget before the election and then they come in with a budget to deeply cut services, sell off Crowns.”

Meili also said the budget does not address the need for child care in the province to get people working.

Moe agreed there needs to be a plan to balance the province’s books, and a first-quarter report would be out before the election.

The government plans to add another $3-billion to Saskatchewan’s debt load, with $1.9-billion of borrowing tied to pandemic-related initiatives.

Saskatchewan students to return to classrooms in September
June 10, 2020 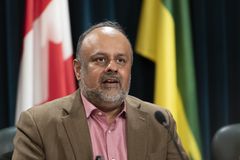 Saskatchewan to present budget in June after agreement reached on 14-day legislative sitting
May 26, 2020 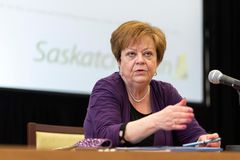