Canada’s provincial and territorial premiers will chart their demands on the federal government on Monday at their first meeting since the federal election.

The 13 premiers, who make up the Council of the Federation, will meet with Prime Minister Justin Trudeau as early as January.

Ontario Premier Doug Ford is playing host to the premiers’ gathering at a Toronto airport hotel, where he and two other conservative premiers met Sunday to announce a deal to develop nuclear-reactor technology.

Saskatchewan’s Scott Moe, who chairs the council, and New Brunswick’s Blaine Higgs signed a non-binding memorandum of understanding with Mr. Ford to collaborate on small modular reactors, a project they say would generate clean and low-cost energy. Mr. Moe told reporters the reactors will not be built for five to 10 years, but would help the provinces reduce carbon emissions and move away from non-renewable energy sources such as coal.

It was a show of co-operation before the premiers hold their formal meeting on Monday, and lay out their wish list for an upcoming meeting with Mr. Trudeau.

Mr. Higgs told reporters the meeting with the Prime Minister will happen in January. The other premiers’ offices said the date is not confirmed, but it will be early in 2020.

“Having this meeting prior to meeting with the Prime Minister in January gives us a chance to focus,” Mr. Higgs said.

Mr. Moe said he hoped to come to a consensus on a few items. The Saskatchewan Premier has pushed for changes to the fiscal stabilization program, a mechanism that provides a financial top-up to provincial governments suffering economic downturns.

Mr. Higgs said he hoped to discuss tariffs on softwood lumber, health care and addictions and mental health. Mr. Ford will be pushing for a federal increase to health-care transfers, and said pharmacare will also be discussed. He is also interested in economic development and internal trade.

The Prime Minister’s Office said Mr. Trudeau looks forward to hearing about the discussions from the premiers’ meeting.

“The Prime Minister will continue having constructive discussions with all premiers with an open mind and a genuine intention to work together on issues that matter to Canadians across the country,” the PMO said in a statement.

One item not on the agenda is the carbon tax. In light of the federal election results in his province – of the 10 New Brunswick seats, the Liberals won six and the Greens one – Mr. Higgs said he has submitted a proposal to Ottawa for a provincial carbon tax. But he also said he supports the other provinces that are challenging Ottawa’s jurisdictional ability to impose a carbon tax, which will be heard by the Supreme Court of Canada early next year.

Speaking to reporters Sunday, Alberta Premier Jason Kenney said his priority will be pressing for guarantees around the construction of the Trans Mountain pipeline expansion and getting changes to Bill C-69, environment assessment legislation that passed last summer.

Like Mr. Moe, he also wants changes to the federal fiscal stabilization program, which has a cap that Mr. Kenney argues has shortchanged Alberta by $1.7-billion during the province’s economic downturn. He says Alberta should get that money.

“At the very least, we must see the cap lifted,” he told reporters as his United Conservative Party wrapped up its annual meeting in Calgary. 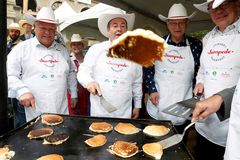