A Toronto task force, with the help of the United Way, is drafting a sweeping, $1-billion-plus proposal to combat chronic homelessness in the cash-strapped city – but Ottawa and Queen’s Park would have to pay for it.

The proposal, which has not been finalized, could include the city purchasing hotels that it has leased as temporary shelters during the COVID-19 pandemic, while accelerating construction of new housing for the homeless.

It could make permanent and expand on the dramatic changes that the novel coronavirus has forced on Toronto’s shelter system, said Councillor Joe Cressy, chairman of the city’s board of health.

In an attempt to curb the spread of the virus, Toronto has moved about 1,700 shelter residents – out of a population of about 5,000 – into 17 leased hotels. It opened new emergency shelter spaces and says it has found permanent housing for more than 1,000 homeless people, in subsidized apartments or social-housing units.

The shift out of shelters was meant to allow for the required two metres of physical distancing between beds for those left behind.

The new proposal, Mr. Cressy said, will call for buying hotels, instead of leasing them, and retrofitting them as shelters or permanent housing. It will also call for new efforts to house another 3,000 people.

The homelessness blueprint is to be made public later this month. It will likely include increasing rent supplements and speeding up plans to build more supportive housing units, which typically come with addiction or mental-health services. And it will outline the potential acceleration of the city’s program to build hundreds of quick-construction “modular housing” units for the homeless.

But the city will need the federal and provincial governments to fund it all – a cry for financial help that could be lost amid the clamour for billions of dollars for other services to cope with the effects of COVID-19. Toronto and other cities have already warned of massive tax hikes and sweeping service cuts if budget aid is not forthcoming.

“The prescription for COVID is not to go back to the old shelters, it’s to end chronic homelessness,” Mr. Cressy said in an interview. “And that prescription is possible. … So the big question mark here is, are the other levels of government going to step up? Are we collectively going to permanently erase the unsafe shelter conditions that existed before, or are we going to set up people to fail once again?”

The estimated $1-billion price to buy hotels and fast-track new housing comes on top of the $200-million in unbudgeted cash Toronto’s shelter system expects to spend by the end of the year responding to COVID-19. The emergency funding the city has so far received from Ottawa and Queen’s Park falls well short even that $200-million.

Mary-Anne Bédard, head of the city’s shelter department, says discussions with the province are already under way on what to do next. COVID-19 is expected to remain a threat for months or years. If the city needs to lease the hotels for more than two years, she says it makes more financial sense to buy them.

City officials are already seeking to extend leases beyond the end of the year, as experts warn that a second wave of COVID-19 is likely in the fall or winter. They have also engaged in talks with interested hotel owners on potential purchases, Ms. Bédard said.

As the pandemic emerged, experts warned that the homeless were particularly vulnerable to COVID-19, crammed into crowded shelters and beset with other health problems. Toronto set up special isolation hotels with health care staff on site to give homeless people with the virus a place to self-isolate.

But Toronto’s response has faced stiff criticism. Advocates for the homeless filed a constitutional case in court that charges the city was too slow to make its shelters safe – and has still failed to do so, despite its assurances otherwise.

Activists say the city is wrong to crack down on the many encampments that have sprung up in its parks since the pandemic began. They argue homeless people are safer from COVID-19 in tents than in the city’s shelters – which they say are turning people away. And they say that the city should be ensuring those living outside have adequate washrooms and access to water in scorching summer temperatures.

City outreach workers have been offering hotel rooms to people living in tents, before clearing campsites.

Since March, 628 shelter residents in Toronto have tested positive for COVID-19. While 83 people needed hospital care, the city says only three people died of the virus. (It said this week that it now has 28 active COVID-19 cases in shelter residents, with outbreaks in three shelters.)

City officials attribute the low COVID-19 death rate to their strategy that prioritized the oldest and least healthy in the shelter population for the first moves into hotel rooms.

On a recent weekday among the tents in Toronto’s downtown Moss Park, one of the city’s largest homeless encampments, Howard Anthony (Tony) Blake said he spent two months living outdoors here until city workers offered him a hotel room outside the core, in Scarborough.

“The hotel … it could really start you back,” Mr. Blake said, adding that he made the trip back downtown to socialize. “They do your laundry for you. They feed you three meals a day. They check up on you in your room. … It’s all starting over for me. And I love it.”

Nearby, Zoe Dodd, one of the harm-reduction workers who launched Toronto’s first – and then illegal – supervised drug-injection site in Moss Park in 2017, says city outreach workers should be offering real homes, not temporary hotel rooms, before they clear the park.

Some homeless people reject living in a suburban hotel far from services downtown, she said. Others dislike hotel curfews and bans on drug use and guests. And some end up back in the park, despite the city’s failure to provide access to running water or enough portable washrooms. The city, she says, is just interested in making the tents vanish.

“They don’t care. I think that politicians – and I feel the same way about the overdose crisis – they know there will be people that die,” Ms. Dodd said. “And for them, they are okay with that. It’s not their communities. It’s not where they’re from. It’s not their people.” 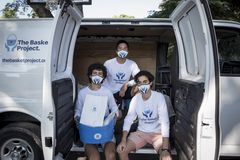 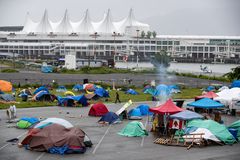