Under the early evening sun, dancers from across Canada and the United States filed onto the powwow grounds at Alexis Nakota Sioux Nation in central Alberta.

It was the first time in two years.

The dancers dressed in regalia, consisting of jingle dresses, eagle feather fans, colourful shawls and ribbon skirts, stepped to the beat of the drum as they made their way through the venue.

“Everybody just wanted to powwow [to] renew their spirits and lift themselves up,” Patricia Alexis, head of the organizing committee for Alexis Nakota Sioux Nation, says of the three-day event earlier this month.

Organizers determined in the fall they would be hosting a powwow, but what that would look like would be based on the province’s restrictions at the time.

But the community decided to go ahead with the full event after Alberta announced it was lifting its COVID-19 health restrictions on Canada Day.

The powwow started the next day and ran until July 4 with the theme of celebrating the beauty and culture of First Nations people.

“It was probably one of our biggest powwows,” Ms. Alexis says. “We had close to 700 dancers.”

She estimates there were 2,000 attendees throughout the weekend – almost double than what they would see pre-pandemic.

“The prayers were very powerful that weekend,” she says.

Powwows are places of gathering and healing. Without that outlet, Ms. Alexis says it can affect people’s mental health, especially since the pandemic left a lot of people feeling isolated.

“People miss the gatherings. [They] miss the drumbeat,” she says. “They miss seeing their family and friends.”

As provinces begin to lift or ease restrictions this summer, a return to powwow season is on the horizon for many First Nations.

Peepeekisis Cree Nation in southern Saskatchewan is preparing for their weekend event beginning on July 23.

The community was originally planning a one-day event just for band members, but switched to the full event when the province decided to lift the remaining restrictions as part of Step 3 of its reopening plan.

Headman Richard Ironquil said the community has only had a couple dozen cases of the virus, and vaccination rates are at about 80 per cent.

The powwow committee consulted leadership and band members who all encouraged a move to go ahead with the celebration, Mr. Ironquil says.

“This will help release some of that stress and tension that was built up. People have been missing their family and friends,” he says.

“It gives community members that live far away a chance to come home and visit where their roots come from, get some grounding and a sense of home again.”

Mr. Ironquil says they have seen hundreds of people participate in the powwow in previous years. While he’s unsure of what this year will look like, he said planning the event has been a rewarding experience, “whether five drums or 20 drums show up it’s going to be a great time.”

For the people of Waywayseecappo First Nation in southwestern Manitoba, the return of their annual powwow comes at a time when familiarity and comfort are needed.

“It’s kind of geared as a healing process for some of our residential school survivors,” Chief Murray Clearsky says.

The theme for the weekend is a “Time for Healing,” with a portion of the ceremony honouring the survivors of residential schools and the children who never made it home.

Chief Clearsky says the recent news of the discovery of what are believed to be unmarked graves at former residential schools in British Columbia and Saskatchewan has prompted survivors in his community to push for the powwow.

“They need healing as well,” he says.

The province hasn’t lifted all restrictions, but moved into its second phase of reopening on the weekend.

The community is urging only those who are double vaccinated to attend the event beginning July 30. They are encouraging people to wear masks and will have sanitizing stations set up. 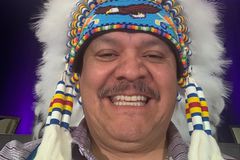 Woman says Ukrainian group dance featuring powwow moves, clothing 'offensive'
August 22, 2017
Organizers set dates for annual Gathering of Nations powwow
August 18, 2017
Report an error
Due to technical reasons, we have temporarily removed commenting from our articles. We hope to have this fixed soon. Thank you for your patience. If you are looking to give feedback on our new site, please send it along to feedback@globeandmail.com. If you want to write a letter to the editor, please forward to letters@globeandmail.com.
Comments