It was a few hours after the seniors’ luncheon on Tuesday that the symptoms began kicking in: dizziness; dry mouth; disorientation. For some, even nausea and vomiting.

The feeling was unlike anything they had experienced before. At least eight headed to the local hospital near Parry Sound, Ont., where doctors discovered they were intoxicated.

Police were called, and after speaking with the group, quickly identified a common denominator: the luncheon’s chocolate brownies.

“We haven’t narrowed down how or what happened, but it seems that we’ve narrowed it down to … chocolate brownies,” West Parry Sound OPP Constable Miles Loach said in a phone interview Thursday.

Someone had spiked the dessert.

Now the job is to figure out who did it − and why.

The lunch, held at the Dunchurch Community Centre in Whitestone, Ont., is part of a monthly “diners’ club” that gives seniors an opportunity to socialize with each other and share a meal.

James McNurdo, who is semi-retired, has been involved with the catering of these lunches for years. On this particular occasion, he had had to delegate food preparation to someone else, but was there to help out with the serving.

“I’ve done these events for a number of years for this particular group so, obviously, I’m as mortified as anybody,” he said in a phone interview Thursday. “We’ve got to get to the bottom of this, no doubt about it.”

With the police investigation ongoing, Mr. McNurdo did not want to give the name of the person he was working with.

The food was prepared at the hall, and people were in and out of the kitchen that day, “so we’re not certain that the caterer had anything to do with it,” Constable Loach said. In fact, they offered to provide police with a sample of the leftover brownies.

“The caterer has been very co-operative,” Constable Loach said. “So I tend to believe that she had nothing to do with it.”

The lunch was also served buffet-style, Mr. McNurdo pointed out − meaning that any number of people could have hypothetically drizzled cannabis oil onto the brownies if it wasn’t cooked into it.

“The rumour mill is in overdrive, no doubt about it,” he said.

On edibles, will Health Canada adopt a lighter touch?

It’s time to end the public’s confusion around edibles

Cannabis is now legal, but where to consume?

If police do determine that someone did this on purpose – whether as a prank or for any other reason – a charge of administering a noxious substance could be laid. In the meantime, Constable Loach said he is thankful that none of the seniors suffered any lasting effects.

“Thank goodness nobody was injured. Because if somebody had been allergic or got in their vehicle and drove and had an accident and killed somebody or whatever, then we’d be facing a whole different set of charges.”

Why were these legendary pot brownies so much harder to make than we thought? A half-baked holiday mystery Subscriber content
December 23, 2018 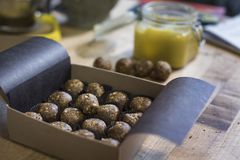 From investing in pot to baking it in brownies: Your complete list of The Globe’s cannabis explainers Subscriber content
October 17, 2018 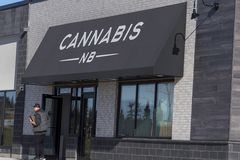 2 Hamilton public works employees fired for bringing pot-laced brownies to work
May 12, 2018
Follow Molly Hayes on Twitter @MollyHayes
Report an error Editorial code of conduct
Due to technical reasons, we have temporarily removed commenting from our articles. We hope to have this fixed soon. Thank you for your patience. If you are looking to give feedback on our new site, please send it along to feedback@globeandmail.com. If you want to write a letter to the editor, please forward to letters@globeandmail.com.
Comments