One of the unions representing workers at Veterans Affairs Canada is sounding the alarm over what it alleges is widespread harassment and discrimination within the department.

The Union of Veterans Affairs Employees says it surveyed more than 350 of its roughly 2,700 members in the fall, and found more than one in three had experienced some form of harassment in the workplace.

Meanwhile, the union reported that nearly one in five respondents had faced some sort of discrimination based on nationality, ethnicity, gender, sexuality or another factor.

“We should not be having so many instances of harassment discrimination happening within the department,” UVAE national president Virginia Vaillancourt said in an interview on Tuesday. “And some of these are at the senior executive level.”

Vaillancourt said the union, which represents front line workers and administrative staff at Veterans Affairs locations across the country, took its concerns directly to the department’s top managers.

But Vaillancourt, who said she was consulted on five discrimination cases last week alone, was unsatisfied with their answer, alleging they wanted to refer the issue to the department’s human-resources section rather than get personally involved.

“They always say that they value employees’ mental health, and that they want to ensure that people have a workplace free from harassment,” she said. “But that’s not the reality of what our members are facing on a daily basis.”

The UVAE’s survey found more reported discrimination and harassment than a separate survey the government itself conducts each year.

In 2019, the wider survey found 13 per cent of Veterans Affairs employees had suffered harassment. Five per cent reported being victims of discrimination.

Both those results were a decline from the previous year.

Veterans Affairs spokeswoman Emily Gauthier noted those figures in an email on Tuesday, adding the governmentwide survey included more employees from the department than the one conducted by the UVAE.

The department has also set up a new organization to help employees facing workplace harassment or violence, Gauthier said, while training has been implemented alongside new rules banning misconduct across government.

Asked about the discrepancy between the governmentwide survey and the union’s results, Vaillancourt suggested members were more forthright to the latter because they took it more seriously and due to privacy concerns.

Veterans Affairs has faced significant pressure in recent years to deal with a growing influx of applications for assistance from former military personnel suffering from service-related illnesses and disabilities.

That influx has not been matched by added investment from the Liberals into the department, which was significantly slashed nearly a decade ago as part of the previous Conservative government’s budget-cutting efforts.

The result has been an explosion in wait times for services and delays in the processing of applications, which has resulted in a massive backlog that has become a source of anger for veterans and a black eye to the government and the department.

Vaillancourt said most of the harassment and discrimination reported by staff originated from within Veterans Affairs, including from supervisors and managers. Yet she said some comes from outside the department.

“We do have situations which it does involve veterans with cyberbullying and things like that,” she said. “We’re still trying to deal with the department to find some sort of mechanism or process to deal cyberbullying.”

‘A beacon of hope for many’: Indigenous Second World War veteran Philip Favel dies at 98
February 1, 2021 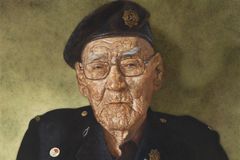