Visitor restrictions imposed by a group home during the pandemic discriminated against a 14-year-old boy with disabilities, Ontario’s human rights tribunal has found.

It was the first decision by the Human Rights Tribunal of Ontario on the “complex issues regarding the role of human rights in the middle of a public health care crisis.”

“Human rights protections do not go away in a pandemic,” adjudicator Jennifer Scott wrote in her decision released on Tuesday.

Pamela Libralesso and her family did not see her son, who lives in a small group home in Barrie, Ont., with round-the-clock care, for six months last year.

Empower Simcoe runs 41 group homes for 180 people with intellectual difficulties. Two of those homes, including the one where the boy lives, are for residents under 18 years old.

From the onset of the provincial lockdown last year, the home had virtual and physically distanced visits. It said it was simply following provincial government rules.

But Ms. Libralesso’s non-verbal son struggled to understand video conference technology, the tribunal heard. He has a rare genetic condition that manifests itself as developmental and physical disabilities.

One of his primary forms of communication is touch, the tribunal heard, making physically distant visits difficult emotionally.

Ms. Libralesso fought to be able to hug and hold her son while following other public health protocols, including using personal protective equipment and screening for COVID-19.

The company refused to alter its plans over fears COVID-19 would make its way into the home where one other child lived.

“It failed to assess the real safety risk in a home with two children,” Ms. Scott wrote. “It also failed to consider the unique needs of the applicant as a child. Instead, it treated him the same as all of the residents in congregate care.”

Ms. Scott noted the home did its best to keep residents and staff safe during the unprecedented pandemic but was wrong to take a “rigid approach” to guidance documents.

The family came to an agreement with the home for regular visits, complete with hugs, late last summer, Ms. Libralesso said.

But she pushed on with the human rights case because she wasn’t sure what would happen if lockdowns returned, she said. She also said she fought for other families in similar situations.

“I’m beyond thrilled,”’ Ms. Libralesso said. “We’re just so happy that the tribunal found in our favour. They had latitude, they had the ability to to accommodate my son based on his disability related needs and they chose not to.”

The tribunal also weighed in on the value of video as a surrogate for in-person visits.

“Technology is not a reasonable form of accommodation for a child who is non-verbal and communicates, at least in part, through physical touch,” Ms. Scott wrote.

The tribunal found the boy’s social exclusion worsened during the pandemic.

“The visitation restrictions imposed by the respondent reinforced, perpetuated and exacerbated the social exclusion the applicant already experiences in the world because of his disabilities and are discriminatory for this reason,” Ms. Scott wrote.

The tribunal did not fault the home for its visitation ban from March to May, in part, because Ms. Libralesso had not asked for accommodation. Rather, she fought for change with the Ministry of Health and the local medical officer of health.

But the tribunal said that changed when Ms. Libralesso asked in June to see her son without physical distancing. She wasn’t able to hold him until late August.

The tribunal found it was up to the home to prove it could not accommodate the boy without incurring undue hardship. The home failed to meet the burden, Ms. Scott wrote.

“Empower Simcoe has been committed to providing a safe and healthy living and work environment for the people it supports and its staff,” Ms. Cousins said in an e-mail.

“In the context of this global pandemic, it has adhered to public health and (Ministry of Children, Community and Social Services) guidelines. Empower Simcoe has always taken its obligations under human rights legislation seriously.”

Ms. Libralesso said her son took about two months to adjust to seeing his family again. He ignored his father, his closest family member, for much of that time, she said. His constant smile disappeared.

“He’s back to smiling, back to his vocalizations and his happy sound, but it was tough,” she said.

Some people with disabilities have been isolated in their care homes for months. Experts say it could lead to an ‘avalanche’ of mental-health issues
September 14, 2020 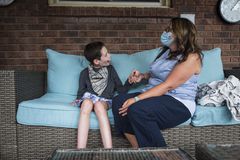