By appearances, the Quatsino Cave amphipod is an unimposing creature: an eyeless, colourless, cave-dwelling crustacean about the size of an eraser at the end of a pencil. But it does have a superpower.

It is so rare, its discovery in a cave on Vancouver Island has achieved what decades of campaigning by conservationists couldn’t do: protect a large chunk of old-growth forest atop a network of prized karst caves.

The amphipods were found in limestone caves near the town of Tahsis on the island’s northwest coast. The area has been a mecca for underground explorers for decades, boasting one of the longest and deepest cave systems in Canada.

The area was open to logging in 1983, when a pair of cavers first collected samples of these tiny troglobites, just seven millimetres in length, and sent them off to experts for identification.

There are so few known examples of the Quatsino Cave amphipod, scientists can only guess at their breeding and feeding habits. They speculate that the species was stranded in these caves by retreating continental glaciers 10,000 years ago. But they do know one thing about their habitat: These amphipods, which resemble shrimp, have only been found in the clear waters of karst caves from Vancouver Island to southeastern Alaska, beneath old-growth forests.

Roughly 4 per cent of Vancouver Island is karst terrain. For years, conservationists have sought protection for the karst landscape – for the caves and their special inhabitants, and for the rare plants and old-growth forests above.

“That was a huge success for us because it’s an area we’ve been trying to protect for years,” said Martin Davis, the Mayor of Tahsis. “It was partially logged back in the eighties and there was a lot of damage done.”

Logging and road construction can damage karst areas because cave entrances can be clogged by logging debris. As well, logging can change water flow, increase soil erosion or even shatter cave roofs.

Mr. Davis started exploring caves in Ontario where, as a teen, he raised the alarm about a planned cottage development that would have disrupted an extensive cave system. His letter-writing campaign resulted in the cancellation of the project, and he learned an early lesson: “Sometimes you just have to make the right call at the right time, or find that window of opportunity.”

He moved to Tahsis 40 years ago for the caving. He became a karst consultant, and realized that British Columbia wasn’t doing bat research in a methodical way to ensure that resource development was avoiding damage to sensitive populations. So he built bridges between the island’s small caving community and bat experts, and together they conducted inventories to help catalogue what needs protecting. In the 1990s, he was part of a network that helped establish a string of cave parks.

“We wanted to protect them in their own right, because they’re unique areas,” he said. “But I started to realize that using rare species or species that are endemic to cave systems, in particular, was potential leverage that we have for protecting these areas.”

In this case, he thought the caves near his Tahsis home could be protected because there are three species of bats that hibernate here, including the endangered Keen’s long-eared myotis and little brown myotis. He was surprised that the province instead accepted the appeal based on meeting the habitat requirements for the Quatsino Cave amphipod.

So how does something so small warrant a protected habitat equal to the size of 950 football fields?

The Quatsino Cave amphipod is thought to require clean, sediment-free water for survival. Thanks to the efforts of cave explorers including Mr. Davis, its habitat is known to be part of a series of interconnecting systems of water flowing underground. The source of the water flows from a stream high above in an alpine ridge, runs down a mountainside and then feeds into the karst caves. To protect the cave water, the forest cover must be kept intact throughout the whole drainage basin.

Darren McConachie is an eco-biologist with the B.C. Ministry of Forests, Lands, Natural Resource Operations who helped document the case for the wilderness protection area. Mr. Davis led him into the caves in 2016 to confirm evidence of the extremely rare amphipod.

“They are not incredibly hard to spot, once you understand what you are looking for,” Mr. McConachie said. “They respond like a crayfish or a shrimp to disturbance. So they’ll swim, they contract their tails, and move in pulses away, and they generally try and hide in the gravel on the bottom of these streams.”

The swimming technique was fast enough that the specimen eluded capture by the research team. But it didn’t matter. Mr. McConachie was there to document the existence of the Quatsino Cave amphipod, and he did. That was enough.

“I’ve never even heard of it when we started this; we owe a lot to the caver community for actually providing us the information on the species itself,” he said.

Still, it took years to negotiate the protection order. The process went at a glacial pace, he said, for complex reasons.

“It’s a significant area, there was some harvest opportunities and we had to discuss with the affected forestry licensee about the implications of protecting this area. And so, that process in itself takes a long time.”

There were negotiations as well with the local Nuu-chah-nulth tribes. Then, there is the question of government staffing priorities. “We work on a lot of different species, and we often work for efficiency’s sake on packages of wildlife habitat areas. But this is a one-off. ... So we actually plugged away at this in fits and spurts over the years.”

In the end, he said, “it was a real success story.”

Mr. Davis, the Tahsis Mayor, said science is key to winning these battles.

“I think in the past, environmentalists operated primarily on passion,” he said. “Scientific rationales, that’s something that governments can more easily wrap their heads around than just passion.”

He noted that it took 900 people getting arrested in Clayoquot Sound in the 1990s – which became known as the War in the Woods – before the province would protect that Vancouver Island valley. “In our caving group, you know, we’ve got 100 cavers on the island, so we don’t have the numbers that would really lead to any protection on that basis. So we had to work smarter in order to achieve any results and, I think, actually, we’ve been wildly successful.”

Quite a catch: Finding solace in fly-fishing
September 6, 2020 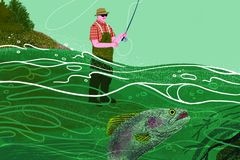