The unleashed-dog area next to Vancouver’s Olympic Village is a hub of busyness on a warm Labour Day weekend, owners watching their pets sprint and jump against a backdrop of downtown condo towers.

The red bins next to the park get steady business, as those owners drop off what have become ubiquitous accessories to dog ownership in the city: plastic bags filled with their dogs’ biological waste.

Most of the owners don’t know about the labour-intensive process that follows those plastic bags of dog poop. The City of Vancouver pays contractors to carry out the unlovely job of slicing the bags open, mixing the feces with water and then delivering the liquid result to the region’s sewer-treatment system – after throwing out the bags, which are not biodegradable no matter what some manufacturers claim.

“Ugh,” is the response from dog owner Justin Lee when he hears about that procedure, after depositing a bag on behalf of his British bulldog, Bubba, at the park.

“I didn’t know that. I didn’t realize those bags aren’t compostable.”

But anyone working in the business of collecting solid waste – the region’s cities and the Metro Vancouver regional district – does.

And now they are also hunting for a better way to handle the thousands of tonnes of dog waste that are deposited throughout the Lower Mainland every year, on the ground, in regular garbage bins and all kinds of other places that are problematic.

That’s what prompted the City of Vancouver to issue a call recently (deadline, mid-September) for anyone with suggestions for better methods, from worm composting to regular composting to a new program to persuade dog owners to take their bags home, cut them open themselves and dump the contents into their own toilets. Or any other innovative method.

“We’re definitely looking for what are the other solutions out there,” says Jon McDermott, who oversees the city’s red-bin dog waste pilot project.

At the moment, there are red bins in just eight parks in Vancouver, the result of a test that started three years ago to see if dog owners would use them instead of dumping dog waste into the regular garbage stream.

It turns out they will use them, with the result that the city now collects 25 tonnes a year of poop-filled bags from the red bins – paying contractor Scooby’s Dog Waste Removal Service $40,000 a year to dispose of them.

But the city, prompted by a motion from Councillor Sarah Kirby-Yung, is looking at extending some kind of dog waste program to all of its 300-plus parks, which would mean a huge expansion in poop tonnage from the city’s estimated 32,000 to 55,000 dogs. Bag slicing is too primitive and expensive for that, Mr. McDermott says.

The city’s initiative is being welcomed by others dealing with the same issue.

“I’m really hoping the city will come up with innovative solutions,” says Karen Storry, Metro Vancouver’s senior project engineer in the solid waste division, which ends up dealing with the byproducts of 350,000 dogs directly in regional parks and indirectly in the sewage system. “This may be an opportunity for the right entrepreneur to come up with something.”

Dog waste is a major issue in the region. Feces left on the street gets washed into storm drains and eventually end up in streams, rivers and the ocean. It’s also a problem in landfills. It’s a “concentrated producer of greenhouse gases when it breaks down,” the city’s call-for-information document notes.

It can’t go into city green bins because the region’s commercial composters have been adamant that it’s too problematic for them to process. And it’s not the best idea to put animal feces, which contain pathogens, in backyard composters, Ms. Storry says, even though that’s sometimes proposed as a solution.

“Then you’re managing this material that has risks and that maybe gets put on vegetables, or you have people putting dirt in their mouths.”

Metro Vancouver staff have tried a number of experiments already in their parks: doggy sandboxes with a scented pole in the middle to attract the animals to do their business in that area (dogs didn’t like it); in-ground sewer tanks (didn’t work logistically, as it required people to travel to a single tank, when so many regional parks consist of long, winding trails), and worm composting (a lot of work).

They initiated the red-bin idea in their parks, where across the region more than 100 tonnes of dog waste get deposited every year.

Ms. Storry says getting owners to put dog waste in their toilets would be a good idea, except for her fear that too many owners have been tricked into believing those special dog waste plastic bags are compostable. That’s a worry that her fellow Metro Vancouver engineer Linda Parkinson shares.

“My concern would be the rise of those ‘flushable’ bags,” says Ms. Parkinson, who works in the wastewater division, with some frustration. (The situation is of such concern that an environmental group has filed a complaint with Canada’s Competition Bureau about the mislabelling of those kinds of products.)

Ms. Storry says, whatever the solution ultimately is, it has to be easy for owners. “This isn’t their favourite part of dog ownership, so they want a simple solution.”

But Mr. Lee, who works as a longshoreman in Delta, B.C., is more optimistic about dog owners than their tolerance for handling dog poop.

“As owners, we spend time picking it up so we’re used to it. I think you would find more dog owners would do it than not. And we could help out by doing it that way.”

Vancouver’s beaches are being fouled too frequently
August 9, 2019 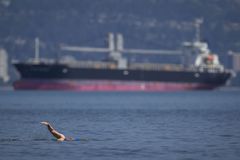 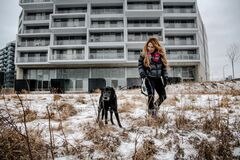 What to do with all that dog poop? Ontario cities come up with creative solutions
March 12, 2018 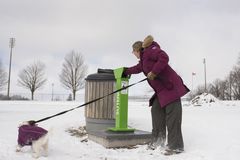