It’s different sharing a building with 27 other households at a time when everyone is potentially a disease carrier. It has Brooklyn Prior-Acosta more than a little stressed out, especially because she’s vulnerable to infection. She’s diabetic and develops bronchitis easily.

Many of her neighbours in her small South Granville apartment building have been more than helpful in bringing groceries for her and her husband – professionals in tech and account management in their 40s – as the couple tries to avoid going out. Everyone stays out of the laundry room when she posts a sign saying she’s inside.

But tensions still arise when living with so many others in a time of unusual rules.

Some tenants were continuing to have dinner parties up until three weeks ago, increasing the number of visitors in the building and hands touching knobs and stairwells. Ms. Prior-Acosta is worried that will start up again, along with more frequent outings by residents, as people think the crisis is diminishing.

If it got bad enough, she feels like she’d need to initiate a difficult group conversation about the rules. That feels a bit intimidating.

“I don’t want to cause tension and conflict. This is already so tumultuous,” Ms. Prior-Acosta said.

As it turns out, she could get some help with that.

A non-profit organization in British Columbia is offering mediation for the many roommates now spending 24/7 with each other, as well as the apartment dwellers, both renters and owners, faced with daily decisions about breathing each other’s air and touching common surfaces.

The free “quarantine conflict resolution service” is a branch of Mediate BC that launched recently as an expansion of its existing services (typically workplace and family conflicts).

“Until now, it’s been workable because you didn’t see each other much,” says Sharon Sutherland, the agency’s director of strategic innovation.

Now, everyone is in their shared houses or apartment buildings much, much more – and with different ideas about what exactly the new rules are.

In shared houses, the conflicts can be over everything from communal physical spaces, such as the kitchen, the bathroom and the deck, to other shared things, such as WiFi and silence.

“In some houses, with way more people in it now, you have three people FaceTiming and one on Zoom. People are definitely trying to own the WiFi time,” Ms. Sutherland says.

One of the most common issues her team has been hearing about so far is stories such as Ms. Prior-Acosta’s: younger people who have health concerns that get discounted because they don’t seem obviously at risk.

“The younger the person is with a medical condition, the more people don’t give them space. We’re often hearing from those people, ‘My roommates refused to respect my needs. I know they’re out with their friends partying.’”

Many shared households are doing fine. Tony Cercello, sharing a house in Kitsilano with three others, said things have been quite workable, even though everyone is now together all the time instead of at their jobs. In some ways, he says, it’s a better situation than friends of his who are completely on their own.

“The internet has been slower, but it hasn’t crashed yet,” said Mr. Cercello, who works in film, where all productions have been suspended. “And there is kind of a conversation, checking in with everyone before we do anything.”

But judging from social media and newspaper advice columns, plenty of others are not getting along well in close quarters.

One Vancouver woman on Twitter posted a series of exasperated messages about the goings-on in her home recently.

Ms. Sutherland said most of the calls to her office so far have come from people in shared houses and apartments, which is a far more common form of living in Vancouver than many other places because of the high cost of housing. The last census indicated 86,000 people lived with non-relatives in the region.

But based on what she’s hearing through conversations, she is expecting more calls from apartment dwellers alarmed about what their neighbours are doing.

People are angry about those they know who were travelling but did not seem to observe the 14-day quarantine, about the noise of children home all day and about smoke suddenly making its way into apartments.

Ms. Sutherland said mediation can help with all of that, even though it seems as though bad behaviour is hard to modify.

“Everybody’s behaviour tends to change when there’s a third person. Everybody wants to seem like the most reasonable person. And often the person who isn’t listening wants an easier relationship, even if only not to have a fight every night.”

Evacuation orders and alerts in effect for areas in B.C.'s Central Interior
Subscriber content
April 26, 2020
B.C. looks at how it can open long-term care facilities to visits from family
April 26, 2020 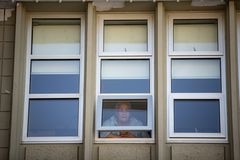 Coronavirus information
The Zero Canada Project provides resources to help you manage your health, your finances and your family life as Canada reopens.
Visit the hub
Follow Frances Bula on Twitter @fabulavancouver
Report an error Editorial code of conduct
Due to technical reasons, we have temporarily removed commenting from our articles. We hope to have this fixed soon. Thank you for your patience. If you are looking to give feedback on our new site, please send it along to feedback@globeandmail.com. If you want to write a letter to the editor, please forward to letters@globeandmail.com.
Comments