Carrie Tait
Published May 24, 2021 Updated May 25, 2021
Comments
Text Size
Please log in to listen to this story. Also available in French and Mandarin. Log In Create Free Account

The First Nation whose traditional territory includes the Fairy Creek watershed on Vancouver Island, where RCMP arrested anti-logging protesters over the long weekend, believes the campaign to stop harvesting ancient trees is undermining its sovereignty and putting further strain on its community during the pandemic.

Pacheedaht First Nation supports the Teal-Jones Group’s plans to log the area, which is near Port Renfrew about 80 kilometres northwest of Victoria, but opponents set up blockades in August that have stopped that activity.

The First Nation owns three sawmills and has a revenue-sharing agreement with the province for logging on its traditional territory. The nation said the months-long protest is interfering with its ability to provide for community members and manage the delicate old-growth forest.

Back to the blockades: Why I continue to fight for British Columbia’s old-growth forests

The Fairy Creek dispute echoes the Clayoquot Sound “war in the woods” logging protests nearly 30 years ago, as well as the continuing battle over the Coastal GasLink in northern B.C., where support from elected bandleaders was challenged by opposition from hereditary chiefs and others in the community.

The RCMP have arrested dozens of protesters over the past week, including Tzeporah Berman, one of the organizers of the Clayoquot Sound demonstrations, for ignoring a court injunction related to Fairy Creek. Officers arrested five people on Monday for a total of 53 arrests on charges of violating the court injunction and obstruction of justice since enforcement began last week.

More protests – and more arrests – are expected. Organizers say there are more than 300 supporters spread out at five locations, as well as an unknown number of protesters who are hidden in the trees, seeking to disrupt logging operations.

Pacheedaht argues responsible forestry is necessary to protect riparian areas, rivers and streams, and allow the band to “rehabilitate the massive historic damage” that followed unregulated logging, mining and hydroelectric power production after Europeans came to the region.

“In the past 150 years, we have watched the resources being stripped from our unceded lands with little to no recognition of our rights, and we are proud and excited to be finally restoring involvement, governance and control,” Rod Bealing, the nation’s forestry manager, said in a statement. “Well-managed forestry has huge potential for the well-being of our nation.”

Forestry employs band members on and off reserve, he noted, and revenue from the industry helps establish and enhance local businesses and services. It is unclear how much financial damage the blockades have caused, Mr. Bealing said, noting Pacheedaht is not partners with Teal-Jones.

“The nation prioritizes managing and stewarding the forests throughout the traditional territory in a way that provides for community now and for generations,” he said. Teal-Jones did not return messages seeking comment.

Mr. Bealing said the protest campaign is a “distraction” from the First Nation’s work to shield the community from the coronavirus, care for elders and move toward self-governance.

Some Pacheedaht hereditary chiefs and members side with the protesters, which has caused a rift in the community. This polarization is exacerbating the strain the pandemic places on the community, Mr. Bealing said, noting the band encourages dissenters in the community to speak their minds.

There have been other examples of resource development revealing division within Indigenous communities, notably opposition to the $6.6-billion Coastal GasLink pipeline in northern B.C., which led to blockades and arrests last year. Wet’suwet’en Nation hereditary chiefs oppose the natural gas pipeline, while elected band councils from 20 First Nations along the planned route support the project. This includes five Wet’suwet’en bands.

Construction of the pipeline is continuing, though the local opposition remains. The hereditary chiefs and the B.C. and federal governments reached an agreement in February of last year that recognized Wet’suwet’en rights and title, while also setting out a process designed to see the group assume control over issues such as child welfare and land use. The agreement did not include the Coastal GasLink dispute.

Susan Gage, 74, who plans to travel to the Fairy Creek area from Victoria to join logging opponents, said she’s prepared to be arrested. Ms. Gage, who is not Indigenous, said she dissuaded her granddaughter from risking arrest and is instead willing to do that herself to protect the ancient trees. About 15 seniors in the group of 50 travelling to the protest Tuesday are ready for arrest, Ms. Gage said. 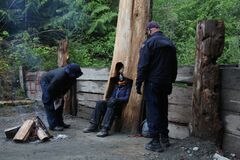 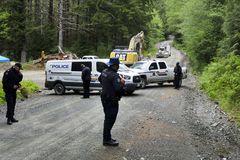 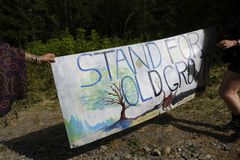