Indigenous entrepreneur Calvin Helin believes he has found the way to turn his pipeline dreams into reality: obtain consent first from certain First Nations and worry about the economics later.

Amid the constitutional mess enveloping the Trans Mountain pipeline expansion plans, the president of Eagle Spirit Energy Holding Ltd. says his alternative, Northern Alberta-B.C. pipeline proposal has gained a new lease on life over the past four weeks. Mr. Helin says investor interest in Eagle Spirit has picked up considerably since Kinder Morgan announced on April 8 that it had halted non-essential work on the Trans Mountain project and set a May 31 deadline for a decision on whether to proceed.

“There has been a change in tone recently. We’ve gone from an idea five years ago, an exercise, to a commercially realistic plan,” Mr. Helin said in an interview this week in a boardroom at Rogers Arena, home of the Vancouver Canucks.

While billions of dollars will have to be raised from a wide range of sources, Eagle Spirit has the early backing of Aquilini Group, owner of the Canucks and a major real-estate developer.

Mr. Helin says he has secured Indigenous consent along Eagle Spirit’s northern route from Alberta to British Columbia and, crucially, approval from the Lax Kw’alaams Band at the proposed export terminal site at Grassy Point. By contrast, the Squamish and Tsleil-Waututh First Nations oppose Trans Mountain’s expansion plans for the Burnaby terminal on their traditional land along Burrard Inlet in the Vancouver region.

But skepticism and criticism persist.

The Coastal First Nations, an alliance of nine Indigenous groups that includes the Gitga’at, is urging the federal government to formalize a planned ban on large oil tankers on the North Coast.

“I think Eagle Spirit is a big joke,” said Gitga’at chief councillor Arnold Clifton, who categorizes the project as a pipe dream because of the expected passage this year of Bill C-48, the Oil Tanker Moratorium Act.

The Lax Kw’alaams Band made headlines in the spring of 2015 when the vast majority of its members voted against exports of liquefied natural gas from Lelu Island by Pacific NorthWest LNG. In the summer of 2016, many members changed their minds, but Pacific NorthWest LNG cancelled the project last year.

Internal strife lingers, with one group within the band issuing a declaration opposing Eagle Spirit.

Bill Gallagher, a lawyer who examines conflicts between First Nations and energy developers, says Pacific NorthWest LNG’s cancellation taught everyone a valuable lesson: Corporations are willing to walk away when faced with shaky project economics, in addition to the complicated and often conflicting views within Indigenous groups.

While the idea of an energy corridor across Northern B.C. is a good one, Eagle Spirit isn’t necessarily a realistic answer to Alberta’s prayers for getting oil to tidewater, Mr. Gallagher cautions.

But Mr. Helin, a lawyer who grew up in Lax Kw’alaams, is unapologetic about his unconventional approach to business.

In what Canada’s oil sector sees as desperate times, his seemingly wild and crazy vision is being given a serious look in Alberta by industry players, who see it as an innovative project led by Indigenous leaders.

“We see a lot of First Nations supporting the northern project that Calvin and his team are moving forward,” said Tim McMillan, president of the Canadian Association of Petroleum Producers. Oil producers Cenovus Energy Inc., MEG Energy Corp. and Suncor Energy Inc. have expressed interest in signing up for capacity on Eagle Spirit, while AltaCorp Capital Inc. has been tapped as a financial adviser.

Mr. Helin, 58, is unfazed by the vocal skeptics who portray his mission as farfetched, given Enbridge Inc’s ill-fated Northern Gateway proposal. He counters that the proposed oil tanker moratorium won’t stand up in court. He plays down the criticisms of the Coastal First Nations and adds that it is unrealistic to expect him to obtain unanimous consent from First Nations across B.C.

To differentiate his project from Kinder Morgan’s, he is proposing to remove bitumen from the picture. He says shipments of medium crude, a lighter commodity, are much less controversial among the Indigenous leaders who count – those along Eagle Spirit’s route from Alberta to Grassy Point.

He has revised his proposal several times over the past five years, and the latest vision does not depend on refining heavy crude into synthetic light oil. Still, over the long term, he is open to having a third party build a refinery in Alberta if it makes economic sense.

Taking a back seat for now is the proposed pipeline’s economic viability, because without Indigenous support at the outset, new energy megaprojects in Canada are doomed, Mr. Helin said. “The toughest thing to do is getting support from First Nations,” he said.

He credits Luigi Aquilini, the patriarch of family-owned Aquilini Group, for relying on “gut instinct” in agreeing to help Eagle Spirit in its early days, in 2013. “Luigi understands that there isn’t much of a chance for things to move unless there is support from First Nations,” Mr. Helin said.

Eagle Spirit plans to apply next year for federal regulatory approval for its $12-billion pipeline plan.

Mr. Helin says he takes a neutral position on Trans Mountain, only making comparisons to show why he should be taken seriously. He insists that Eagle Spirit’s Grassy Point site is better situated than Kinder Morgan’s Burnaby terminal. “The problem with Kinder Morgan is the location of their port and the political and navigational risks associated with that site,” he said.

He says the roots of the impasse over Kinder Morgan’s project can be traced back 40 years, to a comprehensive 1978 study by the federal government. It concluded that Grassy Point would be the best export location in British Columbia, with much better ratings than Burrard Inlet in categories such as cleanup potential in the event of an oil spill.

Grassy Point’s deepwater site would be capable of handling enormous tankers called very large crude carriers, which are well suited for oil exports to Asia, according to an Eagle Spirit presentation. The company argues that going through Burrard Inlet would be less efficient because it requires smaller, Aframax tankers to navigate under two bridges in the shallower waters of the Port of Vancouver, potentially rendering shipments to Asia uneconomic.

Mr. Helin says he has the momentum – and the support of his older brother, John, who is mayor of the Lax Kw’alaams Band and a former vice-president of Eagle Spirit.

The Lax Kw’alaams Band filed a notice of civil claim in March in B.C. Supreme Court, against Canada and British Columbia, claiming aboriginal title to its traditional territory, including Grassy Point.

“This court case isn’t about oil, per se. It’s about the federal government imposing its will on us without consulting us about banning tankers,” John Helin said in an interview. “The government talks about reconciliation, but it doesn’t mean anything. Our people want economic benefits and they want jobs.” 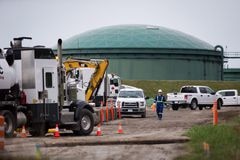 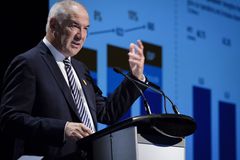 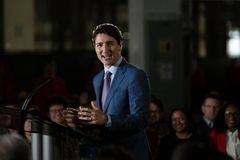