The Liberals did not receive the drubbing they were expected to get in Monday’s federal election in British Columbia, where the SNC-Lavalin scandal and the party’s support for pipelines were predicted to cost seats.

The Liberals held onto 11 seats, far less than the high-water mark of 17 they received in 2015, but still well above the two they won in 2011 and five in 2008. On Monday, they won some competitive areas of the 42-seat province, sometimes defying predictions, although two long-shot bids to win Tory and NDP seats flopped.

Gerald Baier, acting director at the University of British Columbia’s Centre for the Study of Democratic Institutions, said he was surprised that B.C.’s four cabinet ministers were re-elected – a result he said would give Canada’s westernmost province “a fair bit of influence within the cabinet.”

The Greens saw the re-election of their two B.C. incumbents on Vancouver Island, one of them party leader Elizabeth May. Jody Wilson-Raybould, once a prominent Liberal cabinet minister, was re-elected as an Independent in Vancouver-Granville.

Political scientist Hamish Telford of the University of the Fraser Valley noted that B.C. is a four-party province where parties won where expected, and the Conservatives regained seats in Vancouver suburbs and elsewhere.

This riding is ground zero for the expansion of the Trans Mountain pipeline project because it is home to the tank farm.

However, Liberal Terry Beech managed to win re-election here, fending off New Democrat Svend Robinson who was aiming for a comeback 15 years after he ended a high-profile political career. Mr. Beech won 36 per cent of the vote compared with 32 per cent for Mr. Robinson. Heather Leung was dropped as Conservative candidate over homophobic remarks, but too late to remove her name from the ballot. She won 20 per cent of the vote.

In election-night remarks, Mr. Beech said he had worked, throughout the debate over Trans Mountain, to ensure that he served his constituents regardless of their view on the pipeline. He said the close results would encourage him to reach out to voters who did not support him.

On Tuesday, Mr. Robinson said he had yet to figure out specifically what went wrong, but the North Shore part of his riding north of Burrard Inlet may have been more supportive of the pipeline expansion than the Burnaby part of the riding. “The pipeline issue wasn’t as salient there, which frankly surprises me,” he said, “On the doorstep, it didn’t come up as often.”

The Liberals held two other North Shore ridings previously represented by the Conservatives. One was West Vancouver-Sunshine Coast-Sea to Sky Country, previously held by Pamela Goldsmith-Jones, who didn’t seek re-election. Liberal Patrick Weller won 35 per cent of the vote, compared with 27 per cent for the Conservative candidate. The other North Shore riding is North Vancouver, represented by Jonathan Wilkinson, who has been fisheries minister. He was re-elected with 43 per cent to 27 per cent for Conservative Andrew Saxton, seeking a political comeback after being defeated in 2015.

The Liberals bet on winning two long-shot ridings, and deployed Leader Justin Trudeau to rally support in the ridings.

Still, former provincial cabinet minister Terry Lake lost in Kamloops-Thompson-Cariboo by more than 12,000 votes to Conservative incumbent Cathy McLeod, who has held the riding since 2008. And former broadcaster Tamara Taggart lost Vancouver Kingsway to New Democrat Don Davies by 11,138 votes. Mr. Davies was also first elected in 2008. “Star candidates really aren’t as powerful and bright as we like to think that they are,” Mr. Telford said.

Mr. Lake said Tuesday that he underestimated the enmity toward Mr. Trudeau and the Liberals in the B.C. Interior over such issues as deficit spending. “It’s Alberta-like in its intensity,” said Mr. Lake. “To lose by 11,000 votes? I was shocked.” He urged the Liberals not to give up on his riding though he ruled out running again. “You need to give room and support younger people coming through," he said.

One of B.C.’s tightest races was in Port Moody-Coquitlam, where Conservative Nelly Shin won a three-way battle by eking out a lead of less than one percentage point over her NDP rival, Bonita Zarrillo.

The race in this suburban Vancouver riding was close the whole evening and Ms. Zarrillo led for a while. But Ms. Shin eventually secured the victory with 16,588 of the votes, only 333 more votes than Ms. Zarrillo, a three-term city councillor for Coquitlam. Liberal candidate Sara Badiei, who ended up in third place, also claimed near one third of the votes.

The riding had been held by NDP MP Fin Donnelly, who chose not to run for re-election late last year.

Ms. Shin, a parachute candidate from Ontario, moved to Coquitlam last year. She is an entrepreneur, educator, humanitarian and musician. Her family immigrated to Canada from South Korea in the late 1970s to flee political tension. According to Korean media, Ms. Shin’s victory made her the first Korean-Canadian to be elected to the House of Commons.

The Port Moody-Coquitlam riding, which has a population of 110,817, has seen NDP, Reform Party, Canadian Alliance, Tory and Liberal MPs in the past three decades.

Opinion
Bloc Québécois Leader Yves-François Blanchet emerges as the only winner in a field of losers Subscriber content
October 22, 2019 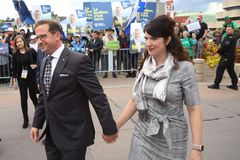 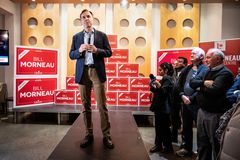