A web of overlapping land claims covers the resource-rich territory that the Wet’suwet’en say is their traditional land, a complexity that will challenge the efforts under way to quickly define their rights and title.

The agreement reached on the weekend between Canada, British Columbia and the Wet’suwet’en hereditary leadership promises to fast-track implementation of Indigenous rights and title over a vast tract of northern B.C. The details have not been made public, and the agreement requires the ratification of the Wet’suwet’en people.

But any path forward will have to untangle that knot of overlapping claims. Several Indigenous groups also lay claim to some portions of the 22,000 square kilometres claimed by the Wet’suwet’en. The Carrier Sekani, the Gitxsan, the Tsimshian and the Lake Babine Nation, all have territory that overlaps with the Wet’suwet’en, according to the B.C. Treaty Commission.

The very few territories where the boundaries are settled, he said, have involved negotiations between neighbouring nations. He said the recent negotiations with the hereditary leaders of the Wet’suwet’en and his government have focused on their complex issues of governance, not on the physical boundaries of their title claims.

B.C. Minister of Indigenous Relations and Reconciliation Scott Fraser said where there are overlaps with the Wet’suwet’en, the other communities will have to be consulted before title can be declared on any piece of land.

“The priorities, documentation and timelines, that will be determined together if the proposal is ratified by the Wet’sewet’en clan members,” he said in an interview Wednesday.

Overlapping claims are among the thorniest of the questions left hanging for 23 years after a precedent-setting Supreme Court of Canada ruling known as Delgamuukw, that declared rights and title exist for the Wet’suwet’en and the Gitxsan, but declined to say where.

That omission has had a direct impact on the conflict over the construction of the Coastal GasLink pipeline, which is part of a liquefied natural gas project that both Canada and British Columbia say is crucial to economic prosperity, but which the Wet’suwet’en hereditary chiefs oppose.

Mr. Fraser stressed there are many issues left unresolved by Delgamuukw that will have to be worked out – and it will not be done overnight.

“Some of the issues around rights and title that were not clarified in Delgamuukw decision, there are a lot of pieces that have to happen. It may have to happen in stages.”

There are few treaties settled in the province, and almost all of British Columbia has overlapping Indigenous land claims. B.C. and Canada have put the onus on Indigenous nations to resolve shared territory and overlap issues between themselves, although the province will consult with other potentially affected nations.

In the Delgamuukw decision in 1997, Chief Justice Antonio Lamer ordered another trial to determine the specifics of the Gitxsan and Wet’suwet’en claims. He urged the parties, however, to negotiate instead. And he emphasized that any resolution will require the neighbouring nations to be included in the settlement.

“Determinations of Aboriginal title for the Gitxsan and Wet’suwet’en will undoubtedly affect their claims as well. This is particularly so because Aboriginal title encompasses an exclusive right to the use and occupation of land, i.e., to the exclusion of both non-Aboriginals and members of other Aboriginal nations,” he wrote.

The court has provided a solid constitutional basis for negotiations, he added, and “those negotiations should also include other Aboriginal nations which have a stake in the territory claimed.”

Delgamuukw was hailed as a landmark case because it established that aboriginal title is a right protected under the Constitution, and that title lands must not be used in a way that is irreconcilable with the nature of the group’s attachment to the land. That is the basis of the hereditary chiefs’ argument that the Coastal GasLink pipeline cannot be built in their unceded lands.

But the ruling left many questions that have now been left to an expedited implementation process, if the Wet’suwet’en people ratify the proposed agreement.

The Wet’suwet’en did not pursue their case further in the courts and instead entered into treaty negotiations, but later abandoned the process, which has been criticized for its glacial pace.

The litigation route has not proved more expeditious. After a lengthy court challenge, the Tsilhqot’in Nation became the first in Canada to win title to its land, located west of Williams Lake in the B.C. Interior, in a historic Supreme Court of Canada decision in 2014. However the details of implementation are still being negotiated with B.C. today.

A possible model for the Wet’suwet’en is the deal signed by the B.C. government in January with seven Carrier Sekani First Nations, that confirms rights and title in a fraction of the time that the treaty or court process offers. The Pathways Forward 2.0 Agreement took just six years to conclude, and includes provisions for self-government, shared decision-making over their territories, and a revenue-sharing structure​.

Over the next five years, the community of more than 8,400 people, whose territory spans 69,600 square kilometres, will receive a $70-million economic development fund, an additional “wealth fund” designed to generate revenues, money for programs to revitalize Carrier and Sekani languages and culture, and provisions to build governance structures that will lead to self-government.

Another critical issue is how the Wet’suwet’en will be governed. In a process that is expected to be completed by March 13, the hereditary chiefs are conferring with their clan members about whether they want to move forward with the plan to implement rights and title. The elected chiefs, who have supported the Coastal GasLink pipeline, say they must be a part of this process. Both Canada and B.C. have said it is up to the Wet’suwet’en people to decide who will represent them in this claim to a collective right. 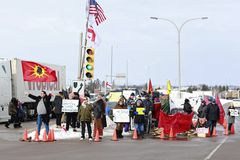 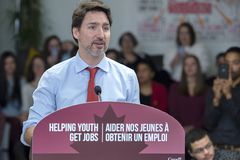 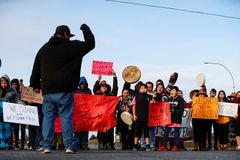 Exploring the implications of agreement between Wet’suwet’en and government
2:57
May 7, 2020 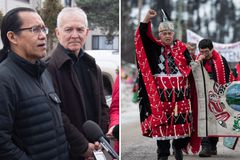