The Crown’s case against the MV Marathassa, the bulk carrier that spilled oil in English Bay three years ago, continues to fall apart. In the latest setback, Provincial Court Justice Kathryn Denhoff found that accidentally dumping bunker oil in the sea is not a crime under Canada’s environmental protection law.

As the federal government looks for ways to push its Trans Mountain oil pipeline expansion through to the West Coast, it is assuring British Columbians it is building a “world class” regime to respond to oil spills.

In the spring of 2017, Greece-based Alassia NewShips Management Inc., the owner of the MV Marathassa, was charged with 10 pollution-related offences. One by one, the defendant has batted the charges off. Only four are still before the court.

After the latest round of court proceedings, Justice Denhoff in a Sept. 18 ruling found Alassia NewShips not guilty on a charge under the Canadian Environmental Protection Act (CEPA) of disposing of fuel oil into the sea.

She noted that the Crown’s theory is that a malfunctioning valve allowed fuel oil to escape into the vessel’s cargo hold. When the hold was flushed while the ship was at anchor, the fuel accidentally escaped into the bay.

But the law, Justice Denhoff found, prohibits only the deliberate disposal of such oil.

“The Crown has not tendered any direct or circumstantial evidence that if there was any disposal of fuel oil from the Marathassa, it was deliberate,” she wrote. “To the contrary, the evidence of the Crown suggests that any disposal was accidental.”

Elsewhere in the judgment, she writes that the word “disposal” in the CEPA is well understood as meaning “deliberate.”

The federal government is appealing the decision. But Eugene Kung, a staff lawyer with West Coast Environmental Law, said the diminishing case against the Marathassa is concerning.

“This highlights the fact that stronger laws are needed to ensure that the polluter-pay principle is enshrined in our laws, and that there is an enforceable mechanism, with teeth,” he said in an interview.

A spokesman for the federal environment minister declined comment on the grounds the case is unresolved.

In response to concerns about the Trans Mountain expansion, the federal government has said it has put a world-class ocean protection plan in place to guard against increased risk of an oil spill.

The case of the Marathassa has done little to inspire confidence.

The first report to the Coast Guard of a spill from the bulk grain carrier was logged at 5 p.m. on April 8, 2015. It was a calm day on the water, with hours of daylight left, in view of downtown Vancouver’s office towers.

Despite those almost perfect conditions, the cleanup was beset by delays and miscommunication.

It took four and a half hours after recreational sailors called in the precise location of the spill for the Western Canada Marine Response Corporation, which is responsible for cleaning up spills, to arrive to deploy booms around the Marathassa. By the time the booms were secured the next morning, much of the 2,800 litres of bunker fuel had escaped. It is estimated that half of the oil was eventually recovered.

An independent review commissioned by the federal government described the incident as “an operational discharge of persistent fuel oil with very high consequences.” Beaches were fouled around English Bay, the North Shore, Stanley Park and up into Burrard Inlet. The review found that the response was delayed for nearly two hours as a result of miscommunication, technology woes and confusion over roles and responsibilities between the Coast Guard and its partners.

Under Ottawa’s policy of making polluters pay for cleanup costs, the government established the Ship-source Oil Pollution Fund to cover taxpayer-funded operations and pursue the original polluter to get the money back.

But the City of Vancouver is still fighting to get most of its costs from the fund.

“What we saw with the Marathassa was a small-scale version of what could happen with a tanker spill from Trans Mountain,” Mr. Kung said in an interview. 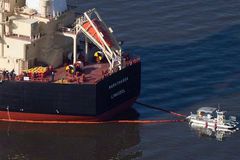 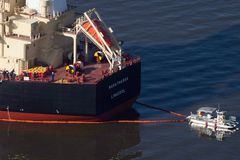 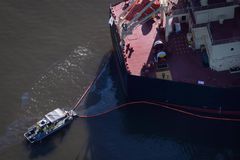