Both projects are worth billions of dollars to the Canadian economy, and thousands of jobs. Both would move fossil fuels through pipelines crossing British Columbia for export off the coast, and each would add to the country’s greenhouse-gas problem.

But LNG Canada has received a relatively smooth ride compared with the Trans Mountain expansion (TMX) experience. The fundamental difference is the product. LNG is marketed as a low-carbon, transition fuel that would help reduce global emissions. Mr. Horgan’s government regards the diluted bitumen that would be shipped from Trans Mountain’s line as a pending environmental disaster.

But these are not the only differences. The Globe and Mail looks at the two projects side by side:

LNG: The Canadian Association of Petroleum Producers estimates that Canada’s economy could grow by an average of $7.4-billion per year over a 30-year period if total export volumes were to reach 30 million tonnes a year from LNG Canada and potentially a smaller-scale project. (LNG is forecast to export more than 26 million tonnes per year at full capacity if two phases are completed.) The B.C. government forecasts LNG Canada will produce $23-billion in provincial revenue alone, over a 40-year period, based on Phase 1 of the project.

TMX: The Conference Board of Canada envisages $47-billion in various government revenue over a 26-year period under Trans Mountain’s expansion plans.

LNG: LNG Canada is forging ahead amid forecasts that there will be global supply constraints of the fuel in the mid-2020s. Construction of the terminal in Kitimat, B.C., could be completed in 2024, in time to catch the window of opportunity in which the global market is thirsty for LNG. It has been a roller-coaster ride for the co-owners of LNG Canada. In 2016, the project got delayed amid worries about a worldwide glut of LNG developing.

TMX: TMX’s proponents say the pipeline expansion is required to give Western Canadian oil producers access to higher-value export markets and lessen their dependence on the United States. Former owner Kinder Morgan, and now the Canadian government, say oil companies have made 15- and 20-year commitments that add up to roughly 80 per cent of the capacity in the expanded pipeline. The expansion project would roughly triple the capacity of the existing system.

Megaprojects on the scale of LNG Canada or the Trans Mountain expansion require hundreds of permits along the way, but LNG Canada has not had the same level of scrutiny because the project is being built within B.C.'s borders.

TMX: TMX requires permits from 14 provincial and federal departments, and had cleared two major regulatory hurdles: The National Energy Board review concluded the project would have no significant adverse effects but imposed 157 conditions, and B.C. Environmental Assessment produced an additional 37 conditions. With the Federal Court of Appeal ruling, however, the project is now going through another NEB hearing specifically on the project’s marine-shipping impact on the environment, which is to be completed by February. However, Ottawa has also reopened consultations with Indigenous communities and it is not clear when that will be complete.

LNG: LNG Canada did not require an NEB review, but it has received the necessary approvals – an export permit, Navigation Protection Act approval and Fisheries Act authorizations, to name a few, after a joint environmental assessment that did find the project is likely to cause significant adverse environmental effects – but those effects were deemed "justified in the circumstances.” The project does face uncertainty, however, due to a legal application seeking to force a full NEB review. That application has not been decided.

The proponents of both projects began engagement with Indigenous communities who would be affected years in advance of breaking ground. But the outcome of those consultations has defined why one is stalled and the other is going ahead.

LNG: LNG Canada has reached agreements offering financial benefits with every elected First Nations government along the route of the pipeline, and along the shipping route through the Douglas Channel. There is one protest camp along the pipeline route. The LNG facility is in the traditional territory of the Haisla Nation, which has embraced LNG as a means to financial self-sufficiency. In addition to impact-benefit agreements with First Nations, the proponents have ensured Indigenous businesses are in line for jobs: LNG Canada says billions of dollars will flow to First Nations in training, contracting, employment and community payments.

TMX: TMX has signed 43 benefit agreements with Indigenous groups in B.C. and Alberta, but says it cannot release a list of those communities because of confidentiality agreements. It does say it has agreements with First Nations wherever its pipeline crosses reserve lands. However, the project has been blocked by coastal First Nations who successfully argued in the Federal Court of Appeal that they were not adequately consulted by Ottawa, and that the government did not make accommodations according to their specific concerns.

The environmental risks of shipping heavy oil through Vancouver’s harbour to the open Pacific waters has been a major sticking point for Trans Mountain, leading to the Federal Court of Appeal quashing the environmental certificate in August. A new NEB review is now getting under way. But both projects have also been scrutinized because of their contribution to greenhouse gas (GHG) emissions at a time when Canada is committed to cutting CO2.

LNG: Environmentalists have warned that the energy-intensive process of transforming natural gas into LNG threatens to derail British Columbia’s legal requirements to reduce GHGs by the year 2030. Once in production, the first phase of the LNG Canada project would generate 3.45 million tonnes of CO2 equivalent annually, according to the B.C. government. That includes 1.24 million tonnes for extraction of natural gas in B.C.’s Montney gas fields, based on the expected incremental increase in gas production. As well, there would be 0.11 million tonnes for the energy used to squeeze the gas down the pipeline, and 2.1 million tonnes generated in the liquefaction process. During the construction period, the project would release 0.2 million tonnes of CO2.

TMX: By comparison, the National Energy Board estimates the annual emissions from the expansion of the Trans Mountain pipeline would not even trigger reporting requirements except at the export terminal in Burnaby. The pipeline and export facility would generate 0.4 million tonnes of GHGs. However, the emissions generated "upstream,” where the oil is extracted in Alberta’s oil sands, could dwarf the LNG footprint: To meet the capacity added by the expansion project, Environment Canada estimates emissions could range from 14 million to 17 million tonnes of GHGs per year. However, the report notes: “It is likely that the upstream emissions calculated in this assessment would occur regardless of whether the project was built or not.” It will depend on what happens with oil prices. Construction emissions would total one million tonnes of GHGs.

LNG: LNG Canada says its project will create up to 10,000 jobs at the peak of construction and up to 950 permanent jobs once the liquefaction plant is running.

TMX: TMX estimates that the pipeline expansion will create the equivalent of 15,000 construction jobs, and also produce 90 permanent jobs.

Both Trans Mountain and LNG Canada benefit from a host of subsidies provided to Canada’s oil-and-gas sector. Deep drilling credits, development and exploration-expense write-offs, royalty reductions – the International Institute for Sustainable Development says Canada and the provinces give away more than $3-billion each year to keep fossil-fuel production afloat.

TMX: TMX received the ultimate financial aid when the government of Canada purchased the existing pipeline for $4.5-billion this summer, and agreed to take over the expansion project. On top of that purchase price, Canadian taxpayers could be on the hook for construction costs of $7.4-billion or more.

LNG: LNG Canada’s partners signalled doubts about their project two years ago, suspending a final investment decision and saying the economics of the project didn’t work at that time. This spring, the B.C. government announced a new LNG tax framework – it works out to $5.34-billion in relief from provincial taxes and fees for LNG Canada. As well, the federal government will provide $275-million to support infrastructure improvements and increase marine protection.

Of the two energy megaprojects, Mr. Horgan maintains that LNG Canada is better for the environment, for Indigenous communities, and for the economy. But this is a British Columbia investment in getting B.C. resources to market. For Alberta, TMX remains the project that matters. 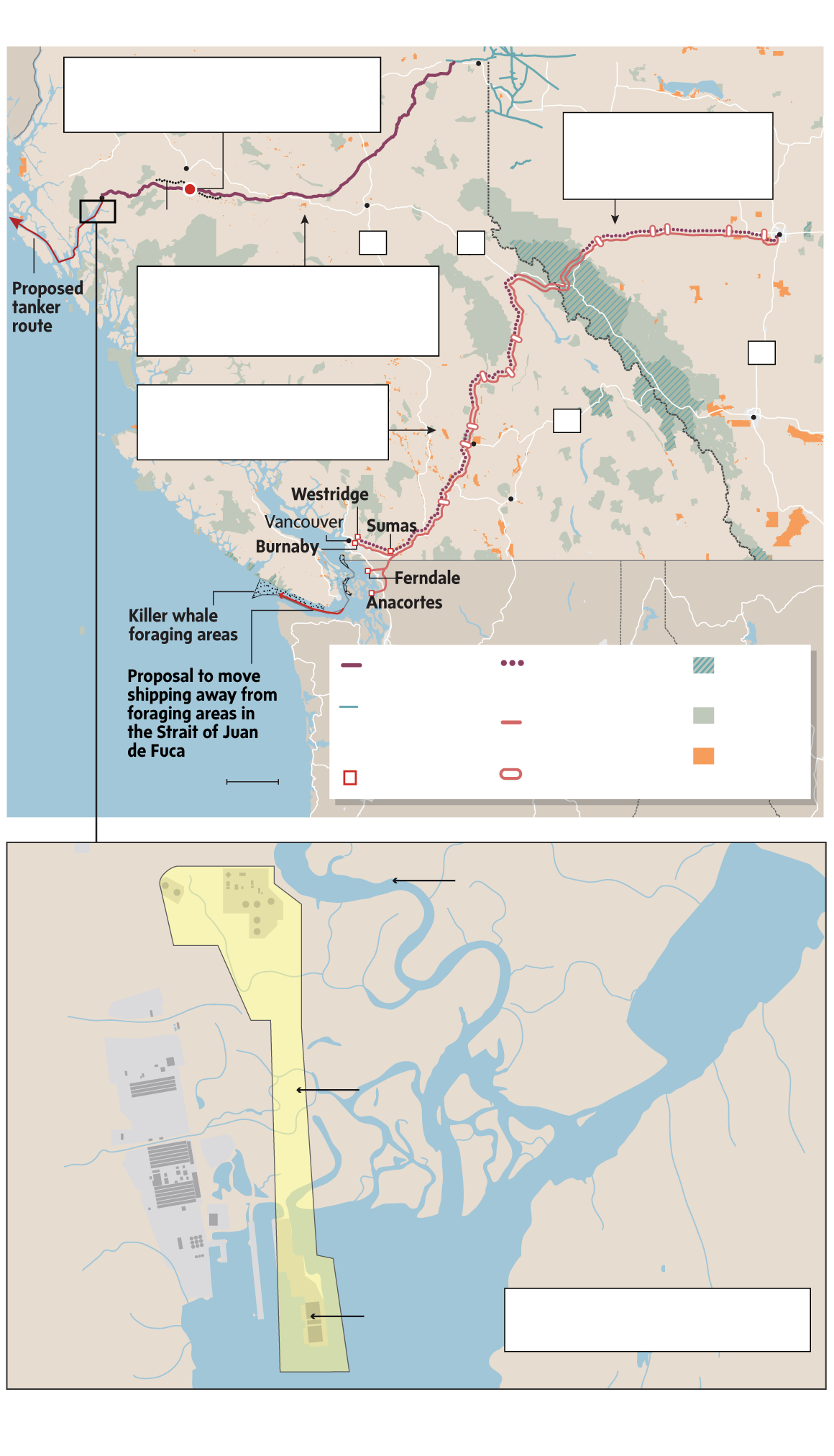 Some members of the Wet’suwet’en

are blocking a bridge over the Morice

River in a bid to stop the pipeline

LNG Canada and its pipeline partner

have signed 25 agreements with First

Nations along the pipeline route

based on project impacts.

nous groups in B.C. and Alberta

the Strait of Juan

nal could be completed by 2024