Bard on the Beach, Vancouver’s annual Shakespeare festival, will hold off until early April to announce a decision about this year’s festival. Cancelling the season would be devastating to the organization, which relies on earned revenues such as ticket and concession sales for 70 per cent of its funding. Less than 4 per cent of its funding comes from government.

The festival employs more than 200 people and is responsible for almost $4-million of local wages.

“Given these significant moral and economic stakes, we are focused on actively investigating all the options for presenting our festival this summer, and working out what the implications would be,” festival executive director Claire Sakaki told The Globe and Mail.

The festival had planned its usual two main-stage and two second-stage shows this summer: A Midsummer Night’s Dream and Henry V on the main stage; and on the second stage, a jazz-age production of Love’s Labour’s Lost and Erin Shields’s Paradise Lost, which was first produced by the Stratford Festival in 2018.

Last week, Stratford said it would cancel its performances through the end of May and suspend rehearsals and season preparations, putting nearly 500 people out of work.

Ms. Sakaki says Bard will make the call on any changes to the form and scope of the festival by April 6.

“This gives us time to make current and thoughtful decisions that will greatly affect … the cultural landscape of Vancouver,” she wrote in an e-mail. “We are proud of the role we play in this community and don’t take it lightly.”

On Monday, the Vancouver International Children’s Festival said it was cancelling this year’s festival, planned for late May.

“With school groups composing 50 per cent of the 25,000 attendees expected during the week of the Festival and with vulnerable attendees such as children and grandparents scheduled to attend, the prudent decision has been made to forgo the Festival this year,” the festival said in a statement.

The Coastal Jazz and Blues Society said on Monday that it was still running various scenarios for its annual Vancouver International Jazz Festival, scheduled to begin in June, depending on venues being allowed to open and artists being able to travel.

The Vancouver Folk Music Festival, which takes place in mid-July, said it was monitoring the situation carefully and that no decisions have been made.

Vancouver’s theatre community, along with the rest of the cultural sector – and everyone else – has been devastated by the coronavirus pandemic.

With seven productions either cancelled, postponed or up in the air this spring and summer at Vancouver’s Arts Club Theatre Company, 124 artists’ work is affected. Further, 126 employees had been laid off as of Monday, including all front-of-house and bar staff and most box-office staff. The Arts Club, Western Canada’s largest theatre company, has an annual operating budget of $16-million, about 80 per cent of which comes from ticket sales, according to artistic director Ashlie Corcoran.

“That ratio of tickets sales in our budget, which is a strength in many ways, in times like this when you can’t do shows is very challenging,” she says.

The Cultch laid off most of its staff last week – 19 permanent staff received three weeks’ notice; casual staff of about 50 people were laid off immediately. The theatre’s two senior staff, including executive director Heather Redfern, are working with a reduced salary.

“I’m finding this very difficult because it is affecting all of the people, all of the dreams of people, because it’s not just the staff, it’s also the patrons,” says Ms. Redfern, who is determining what kind of season she can mount next year.

In Richmond, Gateway Theatre has cancelled its final show of the season and laid off about 20 part-time box-office and front-of-house staff, and about an additional 30 crew members.

After that, the theatre is generally packed with rental events for end-of-year recitals for dance schools and other arts academies. “That’s really sad if they don’t get to do the performance that they’ve been working all year for,” Gateway’s executive director Camilla Tibbs says.

“We’re anxious to get back to bringing people together again as soon as we can and celebrating life and culture and the community of Richmond.” 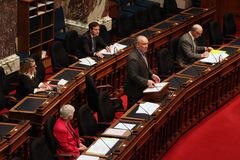