When Anne Davis discovered her local library was holding a seminar on policing oversight in Ontario, her interest was piqued. Having grown up in a policing household – her mom was one of Toronto’s earliest female officers back in the 1960s – she knows lots about police, but not much about how they are policed.

Few do. So in an effort to pull back that curtain on police oversight, the notoriously tight-lipped Special Investigations Unit (SIU) is holding a series of information sessions in libraries to dispel myths and educate the Toronto public on what it is – and what exactly it does.

But even for one branch and one person at a time, the SIU is determined to get its message out.

Under the Safer Ontario Act – passed in the legislature earlier this month with a goal of overhauling policing and policing oversight regulations in the province – the watchdog unit will soon, for the first time, have its own legislation. Previously, there was only a passing reference to the SIU in the Police Services Act.

The unit investigates all incidents involving police that result in death, serious injury or allegations of sexual assault. Since its inception in 1990, the SIU has been shrouded in mystery and misconceptions.

“The police attitude is if you’re not 100-per-cent with us, you’re against us … They feel persecuted, hard done by, whereas community groups feel that the SIU is not aggressive enough,” former SIU Director André Marin said.

It is a never-ending public relations tug of war and has led to a disintegration of trust on both sides. While the information talks in libraries seem as though an unlikely partnership and a small gesture, they are a reflection of the SIU’s willingness – and obligation, under the new legislation – to be more transparent.

“It gives an opportunity for a fair exchange – for us not only to understand where the community members are coming from and some of the issues they might have, but also in turn for the community to understand the limitations of the SIU as well,” Jasbir Dhillon, the SIU’s outreach coordinator, said.

The biggest misconception, she says, is that people think they are police.

“We are not police officers. We are not a police service. We are all [currently] civilians,” Ms. Dhillon explained.

Of the SIU’s 14 full-time staff investigators, she notes that 12 do not come from a policing background. They gained their investigative experience working for agencies such as Canada Post or the Ministry of Labour or credit-card companies.

Within the pool of on-call investigators, many are retired police officers. But she said they are barred from doing investigations in their old police jurisdictions.

It’s not a perfect system, Ms. Dhillon acknowledges, but it’s the only civilian oversight body of its kind in North America. In other provinces, such as Alberta for example, investigations into police are done by seconded police officers.

“It’s a system we can build on and improve and develop,” she says.

Some of the changes outlined in the Safer Ontario Act are already underway as the result of a report last year on police oversight by Court of Appeal Justice Michael Tulloch a review that was spurred by calls from activists in response to lethal police encounters, including the Toronto Police shooting death of Andrew Loku in 2015.

There is a level of public pressure today that has forced the government’s hand, Mr. Marin believes.

“With everyone videotaping everything, we’re getting a lot more transparency led by citizens. That’s putting a lot of pressure on governments to act. Governments need votes and people are upset at how they are being treated by the police,” he said. “People are far more educated than they were before. Information is power. Knowledge is power.”

Last year the SIU investigated 380 cases, Ms. Dhillon said. There were charges laid in 18 (with 20 officers charged in total).

Under the new legislation, the SIU’s jurisdictional powers will be expanded to allow it to investigate both current and former officers, volunteer members of police services, special constables, off-duty officers and members of First Nations police services.

There will also be additional accountability measures put in place. For example, the SIU will now be required to report publicly on all of its investigations and release the names of officers who are charged.

On the Black Lives Matter (BLM) Toronto’s website, a list of demands outlines systemic changes it says “would make life far more livable for Black and Afrikan people of Toronto.”

Under the policing and incarceration category, BLM had previously listed “an overhaul of the province’s Special Investigations Unit, in consultation with families of victims of Police violence, the Black community, and the community at large.”

That demand is crossed out now. It’s been achieved. But while BLM Toronto co-founder Pascale Diverlus sees the library talks and the new emphasis on transparency as positives, she is cautious in her optimism.

“You know, while it is a good first step, we are more interested in seeing how the SIU will interact, consult and engage with the communities it has routinely failed – the communities who have actually been calling for [these changes] for years,” she said. “The work is definitely not yet done … Only time will tell.” 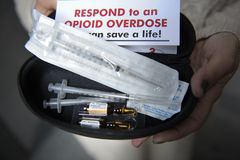 Waterloo regional police officer charged with sexual assault, SIU says
March 7, 2018
2 Durham regional police officers charged after arrested man injured: SIU
March 7, 2018
Follow Molly Hayes on Twitter @MollyHayes
Report an error Editorial code of conduct
Due to technical reasons, we have temporarily removed commenting from our articles. We hope to have this fixed soon. Thank you for your patience. If you are looking to give feedback on our new site, please send it along to feedback@globeandmail.com. If you want to write a letter to the editor, please forward to letters@globeandmail.com.
Comments are closed