A young woman who threw a chair from a high-rise balcony in downtown Toronto has had her sentencing hearing delayed.

Last February, a video on social media showed Zoia throw a chair toward a busy highway.

Zoia is disputing that she posted the video to social media.

An agreed statement of facts said Zoia threw a lawn chair off a 45th-storey balcony.

There were several people walking through the area at the time, including a woman with a child in a stroller, but no one was injured. 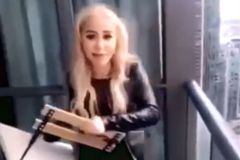