A health organization that runs several hospitals in Toronto has apologized for installing bars over a vent outside a downtown emergency department to deter homeless people from sleeping there.

The University Health Network said the bars were installed because the area outside Toronto General Hospital sees significant traffic from cars and ambulances, and because of safety concerns about garbage and needles found in the area.

But in trying to solve that problem, the organization said it created the impression that it was not concerned about the needs of the homeless. It has since removed the bars.

“I have learned over a long career that when you make a mistake, you step forward, own it and then move on,” Charlie Chan, University Health Network’s interim president and chief executive officer, said in a statement issued Wednesday.

“Given our responsibility to provide compassionate care, it has indeed been seen as hostile and not something a hospital should be doing, given the care we provide to everyone who comes through our doors.”

Dr. Chan noted that those working at the University Health Network are “kind, compassionate and provide daily care for people who don’t have a home.”

The curved grey bars, designed to prevent people from sleeping across the vent, were installed about a week ago and drew considerable backlash from the public and hospital staff, said UHN spokeswoman Gill Howard.

“We had a lot of feedback from people within the organization and we certainly don’t see ourselves as uncaring or non-compassionate – we’re a hospital, we take care of people,” she said in an interview.

“I would say probably the people sleeping on the grate are known to the staff in the emergency department. We care for the homeless and we try to do what we can to get them the services that they need.”

Cara Chellew, a Toronto advocate for more inclusive architecture, said the grate was an “obvious example” of defensive design.

“I applaud the hospital for removing the structure,” said Ms. Chellew, who is also a research administrator for York University’s Global Suburbanisms project. “As they have noted, it sent a strong message to vulnerable people that they are unwelcome there and I think it’s a symptom of a larger problem.”

Ms. Chellew also noted the city has other examples of defensive design, such as public benches with bars in the middle that prevent people from lying down.

Meanwhile, Ms. Howard said the hospital will still need to address safety concerns in the area, but added that staff will also be looking at more ways to help homeless people.

“But the issue is much bigger than the Toronto General Hospital,” she noted. “The downtown of Toronto, and in many places, we do have people who don’t have a home and they are sleeping on the street, and it’s not something that any one organization can solve. 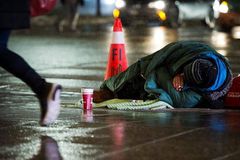 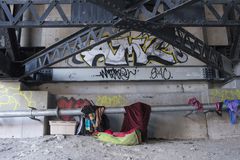