Toronto officials are calling on the province to reverse changes to child care funding they say could lead to the loss of thousands of subsidies for low-income families.

Deputy mayor Michael Thompson said at a news conference Friday that the proposed changes to the province’s budget for child care could result in the loss of thousands of child care subsidies in the city.

In March, Toronto’s budget set aside funding for over 30,000 child-care-centre subsidies. But with the provincial changes, 20 per cent of those subsidies will be lost, resulting in a reduction of more than 6,000 child-care-fee subsidies, according to the city manager.

Mr. Thompson, flanked at the news conference by a group of parents and child-care service workers, said the proposed changes are “not acceptable" and will have a “long-term impact” on families and children in the city should they move forward.

He added that he’s requesting the province maintain their funding for the fiscal year and collaborate with the city to discuss options for child care.

The province, however, maintains the changes will not be as drastic as Toronto is suggesting.

In an e-mailed statement, Kayla Iafelice, director of communications for Ontario’s Education Minister, said Toronto “is continuing its habit of spreading misinformation" and that changes will result in “less than half of what the City of Toronto has suggested.”

Ms. Iafelice added that the city isn’t operating front-line services “in the most efficient manner possible,” and the cuts will challenge the city to reduce its spending on administration costs to funnel the money back into child care.

The city’s data estimate the provincial changes will reduce child-care-service program funding by $28.6-million in 2019, along with a reduction of $56.2-million in policy changes that includes removing a portion of provincial backing from the expansion plan funding. It means a total loss of $84.8-million, which the city says will affect parents with low incomes that benefit from financial assistance.

Elliot Filby, the parent of a two-year-old son who attended the conference, said his immediate response was one of “fear” when he learned about the proposed budget cuts. His son is taken care of in a not-for-profit daycare in the city and Mr. Filby said he’s concerned because the subsidy he receives is crucial to his son’s enrolment in daycare.

In a statement, Mayor John Tory said he, along with other mayors in Ontario, are speaking out against the province’s “last-minute” budget cuts.

“Once again, we are seeing the provincial government downloading by stealth with another retroactive and drastic cut to vital services, which municipalities are responsible for providing, without any meaningful consultation,” Mr. Tory said.

“These cuts are going to impact ... the most vulnerable people, children and families that cannot other otherwise afford child care,” Ms. Stiles said.

According to a report the Canadian Centre for Policy Alternatives released earlier this year, Toronto had the highest child care fees in the country in 2018 with a monthly average cost of $1,685. Other Ontario cities that rounded out the top five were Mississauga, Hamilton, Kitchener and Vaughn.

Mr. Thompson said the city is looking at “a variety of options” to address the cuts but did not discuss any specific actions the city would take if the provincial changes go forward. 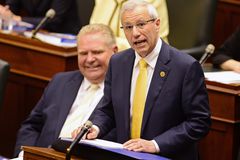 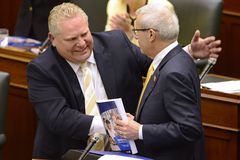 Analysis
Despite Doug Ford’s vow to get Ontario’s books in order, this isn’t a Mike Harris budget
Subscriber content
April 12, 2019 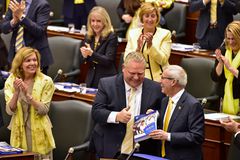