If Honda Civic was a wine label, 2016 would have been a vintage year – perhaps even its finest ever. The 10th-generation Civic that debuted that model year was new from the ground up, and – so Honda told us – had been raised with European sport sedans as its role models.

It showed. With the possible exception of road and engine noise, the all-round talent of the Civic redefined what we expect from the humble compact sedan. And while the tidal wave of crossovers and SUVs has inevitably eroded its overall sales numbers, the Civic has continued to stretch its streak as Canada’s best-selling passenger car. Last year made it 23 years in a row.

The 11th-generation design evolves the excellent architecture that was new in 2016. Wheelbase has grown 35 mm and overall length by 43 mm, while the body structure is stiffer and stronger. Surprisingly, however, the specs don’t show any increase in legroom – in fact, increased rear-seat width is the only interior dimension that changes.

The powertrains are essentially carry-over, but improved. The 2.0-litre naturally-aspirated engine still powers the LX, EX and Sport trims, while the 1.5-litre turbo is exclusive to the Touring. However the 2.0 gains idle stop/start, and the 1.5T gets a power boost from 174 to 180 horsepower (still on 87-octane fuel), essentially bringing it in line with the version already fitted to the current hatchback models (the next-gen hatchback has yet to be revealed). A continuously-variable automatic is standard across the board, with tweaks to reduce friction and improve response.

Just as the exterior has cleaner, simpler lines, Honda applied the same approach to the interior. The gauges reside within their own discrete binnacle while the touch-screen is now high and proud on the centre of the low-profile dashtop. The air vents hide within a striking honeycomb mesh accent that stretches in a straight line right across the dashboard.

Less visible are the many advances in safety. On the passive-safety side, new frontal airbags better protect against brain injury, and side airbags have been added in the rear. The already comprehensive Honda Sensing package of driver aids adds traffic-sign recognition, blind-spot indicator, traffic jam assist (essentially, lane-keeping and adaptive cruise in stop-and-go-to-slow traffic) and, on Touring, low-speed braking control (automatic braking to avoid obstacles when manoeuvring at speeds below 10 km/h).

Like its predecessor the 2022 Civic is offered in four trims, at MSRPs ranging from $24,465 to $30,265. Those represent increases of $1,065 across the board, but include additional driver-assist features as well as push-button start and remote start on the LX, a heated steering wheel on the EX and a whole bunch more on the Touring.

We’ve only driven the Touring so far, but expect the 2.0-litre engine that propels all the other trims to be more than competitive. That should add up to an all-round excellent small car. Still, the competition keep getting better too (the latest Hyundai Elantra was 2021 North American Car of the Year) and at starting prices well below those of the 2022 Civic. Vintage wines may be worth the price to connoisseurs, but the rest of us can usually find something perfectly drinkable among the budget labels.

The silhouette is less fastback now and more three-box shaped. The beltline has been lowered at the rear (i.e. more glass), the A-posts are more upright and the rear quarter-lights have acquired that interesting treatment first seen on the 2018 Accord. Overall we’d say it looks less sporty, more classy.

The 2016-2021 Civic already had one of the segment’s roomiest cabins, and ergonomics have long been a Civic virtue, so the new interior is more about personal taste (how you feel about free-standing screens, or whether you like the honeycomb mesh) than functionality. Visibility, at-the-wheel comfort and general user-friendliness are all hard to fault.

Drilling down deeper, one minor demerit is that the touch screen (9-inch on Touring, 7-inch on lesser trims) still lacks a physical tuning button; and the steering-wheel switches feel flimsy compared with Hondas of old. On the other hand, everyone should be happy Honda kept a digital speed display while also bringing back a conventional analogue speedometer. All trims have a “virtual” LCD gauge cluster, but while in the Touring that includes the speedo, in a 10.2-inch configurable panel, the other trims combine a mechanical speedometer with a 7-inch panel for tachometer and central display.

The centre console accommodates a conventional PRND shift lever, a Sport mode selector on Sport and Touring trims (a first for Civic), and, on Touring, a wireless phone charging pad.

While the mainstream 2.0-litre engine claims the most standard horsepower (158) in the class, our test sample was the Touring, with its 1.5-litre turbo now claiming 180 hp (up six from last year) and 177 lb-ft. of torque (up 15). Combined with the “infinite” ratio count of its CVT transmission, that makes this one quick compact. Even on streaming wet pavement we measured 0-100 km/h in 8.2 seconds, which pretty much guarantees a time in the sevens on a dry track. The relative peppiness is evident in routine street driving, too, and although the CVT makes only a half-hearted effort to mimic a stepped transmission, its CVTness isn’t too obvious, helped by engine refinement that is improved from before, if still not state-of-the-art. But despite Honda’s efforts, road noise is still apparent. Ride comfort is otherwise fine – firm, but well sorted – and if we couldn’t detect much difference in handling without a 2021 Civic for direct comparison … well, there was very little about the handling that needed fixing anyway.

The previously mentioned new driver-assist tech is in addition to already-standard adaptive cruise with low-speed follow, automatic emergency braking, lane-keeping assist, and road-departure mitigation. All told, that’s more standard tech than on any competitor. That said, some rivals’ base models are much less expensive, and/or their higher trims may include features not available on the Civic. As for infotainment and connectivity, all the basics are standard but only the Touring has navigation, Wi-Fi tethering, wireless charging, wireless smartphone connectivity, and a premium Bose 12-speaker audio with HD radio and SiriusXM.

Despite a marginal decrease to 419 L, the trunk volume is still among the segment’s largest, and it rates high on versatility with a large pass-through and seats that fold nearly flat with a modest step up from the trunk floor. 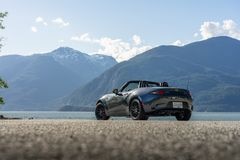 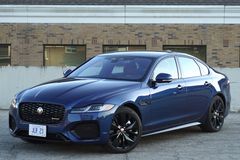 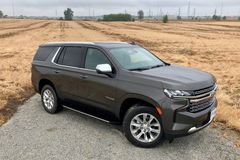 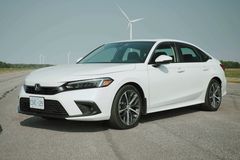