At first glance, it’s hard to understand why a company like VizworX Inc. took so long – in its case, six years – before it started exporting.

Emerging from a University of Calgary lab in 2012, the company uses advanced augmented and virtual-reality systems to create immersive, digital representations of construction projects and other building sites. The technology allows the entire project team to virtually “walk” through the site, interacting with elements of the project and troubleshooting problems that don’t yet exist in the real world.

“The typical design-review process these days involves 3-D models on a 2-D screen,” president and co-founder Jeff LaFrenz says. “Designers understand how to interpret them, but a lot of other members of a team don’t, and problems that become very obvious when you get shovels in the ground might not be apparent in the design review at all.”

Unforeseen snags can add costs when projects need to be reworked – and can mean having to fix mistakes after they are baked into a design.

Given the technology’s potential to solve problems plaguing major builders or resource companies, VizworX may seem to be an ideal innovation-economy exporter. Yet, despite its success in the Canadian oil patch, the company only turned its attention to the wider world last year, when Mercedes-Benz Inc. came calling.

At the time, the auto manufacturer was planning a major renovation of its Alabama factory to accommodate a new line of electric vehicles. The company wanted to understand how the new production line would integrate with the existing factory. It discovered VizworX thanks to a demo the company had created for an app to be used with Microsoft’s HoloLens, a head-mounted augmented-reality display.

“They told us there were only two organizations in the world they could find doing this kind of work,” Mr. LaFrenz says. “That really started us thinking about how we could go outside the local marketplace, and what we had to offer.”

That anecdote is a testament to the power of innovation in driving exports: A company lands its first international client without trying, solely based on an idea and proof of concept. But it’s also a testament to the obstacles even the most innovative companies can face when trying to break into new markets.

“Probably our biggest mistake in expanding outside of Canada was not doing it sooner,” acknowledges Mr. LaFrenz, citing the high cost, both in terms of time and money, required to develop a successful exporting plan.

Those are common obstacles, according to Jan De Silva, chief executive officer of the Toronto Region Board of Trade. “Many smaller companies are so concerned with staying competitive here,” she says, “they don’t have time to think about other markets.” She cites a board of trade report from 2017, which found that only 4 per cent of Canadian small- and mid-sized businesses export, among the lowest levels in the world.

In 2015, the board pioneered its Trade Accelerator Program (TAP), an intensive export-development program that helps companies better understand their international value proposition and find the right markets to match. The program is now running in seven cities across the country. With a recent federal injection of $6.7-million, it will soon expand to smaller communities in Ontario as well.

“The U.S. is considered the easiest market to enter,” Ms. De Silva says. “But it isn’t necessarily the most logical choice for every company, and we have a significant number of TAP companies bypassing it as their first choice and finding larger opportunities elsewhere. These are often the most innovative companies, but they have to find the markets where that innovation is in demand.”

Kari Gordon is director of ecosystem development and exports at Calgary Economic Development, which also helps local small- and medium-sized enterprises (SMEs) identify export opportunities. She says that while innovative products or proprietary technology open doors globally, it’s still up to companies to do their homework before taking a leap into a new market.

“We have a lot of amazing companies doing cutting-edge work,” she says. “And that creates tremendous opportunity to expand on a global scale – but we do see situations where enthusiasm overrides caution.”

She cites a company she worked with that recently tried to expand into Britain. “They failed very thoroughly, let’s say,” she says. “They knew their products and their customers, but not the infrastructure of doing business there, the legal and regulatory reality of a different market.”

The companyʼs flagship product is Panoptica, the augmented-reality tool that captured the imagination of Mercedes-Benz, and more recently, others.

When one of VizworX’s senior developers visited the Middle East on vacation recently, he showed Panoptica to regional colleagues. The demo piqued enough interest to get the company invited to a project-management conference in Saudi Arabia, where, Mr. LaFrenz says, “most of the companies were saying ‘Wouldn’t it be nice if we had a solution for this?’ And we said, ‘We do.’ We became sort of the darlings of the conference.”

VizworX will be back in the region later this summer to move some under-negotiation deals closer to the finish line, and is also in the process of opening a small office in Brazil, to which it will outsource some of its own work. That will help serve as a beachhead through which the company can get a better understanding of the South American market before making a bigger commitment.

Mr. LaFrenz believes that if the company had jumped into exports sooner, it may have been able to expand faster than it did.

“You can fall behind very fast,” Mr. LaFrenz says. “Ten years ago, one of the most advanced human interface technologies was a touch screen. Now, they’re in every shopping mall. Things go from science fiction to everyday life in no time.”

How ketchup chips mix with AI to give a Canadian firm an overseas edge
June 3, 2019 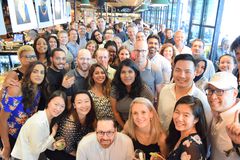