Get into a new car in 2018 and you're faced with a multitude of complicated ways to adjust the stereo volume: buttons or dials on the steering wheel, voice commands that rarely work, fiddly non-buttons on the centre panel, touchscreens that take your eyes off the road, even gesture controls that make you wave your hand as if you're conducting a symphony.

Cars are too complicated. The volume knob is indicative of the problem. Call it feature bloat or mission creep: Cars are trying to do more, but they're not doing it all well. These infotainment features can be distracting, therefore dangerous, and they cost money.

The vast majority of drivers use no more than six functions of their in-car infotainment screens over a long period of ownership, says Randy Stephens, chief engineer of the new Toyota Avalon, citing a recent study by Harman International.

In case you haven't been in a new car in a while, here is a small sampling of some of the new tech you might find: Twitter and Facebook notifications on the in-car display; text messaging using voice dictation; e-mail; real-time local gas prices, in order of proximity; a live, interactive 3-D view of your car on the central screen; perfume atomizer; and adjustments for both colour and intensity of a car's interior mood lighting.

Siri, Alexa and Google Assistant are coming to your car as well. At the recent Consumer Electronics Show in Las Vegas, Ford announced Amazon Alexa integration. If you've got an Alexa-enabled speaker in your house and a Ford plug-in hybrid in your garage, you could be in your kitchen and say, "Alexa, ask MyFord Mobile for my range." The speaker, using internet-based voice recognition, should respond, "Your vehicle is 83-per-cent charged. Electric range is 27 kilometres."

Mercedes announced its own voice-assistant, available first in the new A-Class sedan. Just say, "Hey, Mercedes, navigate to Palo Alto" and the navigation will, in theory, plot a route to Palo Alto. (Presumably the city in California and not the one in Iowa, Texas or Mexico.)

It's a features arms race. Auto makers say consumers are the main force driving demand for more and more infotainment features in cars.

"Is it too much? Look, I'll tell you the investment costs to put stuff into a car that's not expected, or wanted, or asked for by consumers, is not money well spent," says Brian Fulton, president and chief executive of Mercedes-Benz Canada. "There's a lot of research and analysis that goes on before anything gets put into our cars. "

"It's important to be in a position where you can offer the latest technology features that are out there," says Ingo Lasslop, product manager for BMW's compact cars.

It's not just consumer demand. For one thing, people end up paying for features they never wanted in their cars, simply because they're bundled into big option packages. For another, auto makers use these infotainment features to distinguish their vehicles from competitors.

Stephen Beatty, vice present of Toyota Canada, makes the point that features are being added for cost reasons: "We have to bring out new features and sensors in order to move toward the autonomous or semi-autonomous vehicles of the future. Installing those sensors and software systems and so-forth now is the way you're going to start to lower the price by amortizing them over a broader production run."

When you get a new car, it used to be that you'd have to get used to a gearbox with an extra speed or windows that were electric instead of manual. Today, the learning curve is much longer and steeper.

"Cars are advancing much faster than driver knowledge is, so that's one of the things we're going to have to spend a lot of time paying attention to," Beatty says. Toyota developed a series of videos that explain features of an owner's new car, while he or she is waiting for delivery.

It's up to dealers and auto makers to educate their customers on how to set up, use and update the technology .

The solution is not to take the perfume atomizers and gas-price apps and voice-to-text systems out of cars, but rather to identify a better way of controlling them.

Car companies are working toward "smart" cars that offer up the info you want, when you want it. Screens would give only the options you need right now. Once voice control can understand even the most complex commands, the learning curve will shrink. For now, because voice control is imperfect, a backup system is needed – and that's why cars have four different ways to control volume.

"You're going to go through a process where complexity will increase before we're able to get to fully intuitive systems that deliver the right information at the right time," Beatty says. It's important for auto makers to build trust in their technology. If they can't make it easy for you to Bluetooth your phone, how can they be trusted to make a safe, self-driving car? 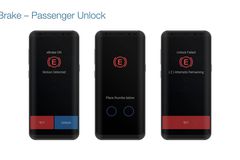 Toyota unveils customizable self-driving concept vehicles at CES
January 9, 2018
Follow us on Twitter @globeandmail Opens in a new window
Report an error
Due to technical reasons, we have temporarily removed commenting from our articles. We hope to have this fixed soon. Thank you for your patience. If you are looking to give feedback on our new site, please send it along to feedback@globeandmail.com. If you want to write a letter to the editor, please forward to letters@globeandmail.com.
Comments are closed