To say Scandinavian style is having a cultural moment right now is incorrect. Scandinavian exports – food, furniture, politics, television, music, fashion – have long been and continue to be in vogue. Let’s get hygge by the fire, cocooned in an Arne Jacobsen chair, wrapped in a cloud-like blanket from Svenskt Tenn, sipping brannvin, while binge-watching the latest Nordic noir on Netflix. The British lifestyle media are all about best Scandi cocktails and five can’t-miss Scandi slippers or whatever, while the Billboard Top 10 is overrun with hits written in a Stockholm song factory run by Max Martin and his accomplices.

All of which is great news for Volvo, which is staking its comeback on the idea that Scandinavian stuff is cool. The second thing you see on Volvo’s Canadian website is, “Award-Winning Scandinavian Design.” Its new cars have little blue-and-yellow Swedish flags sewn into the edges of the seats. The headlights are shaped to evoke Thor’s hammer. 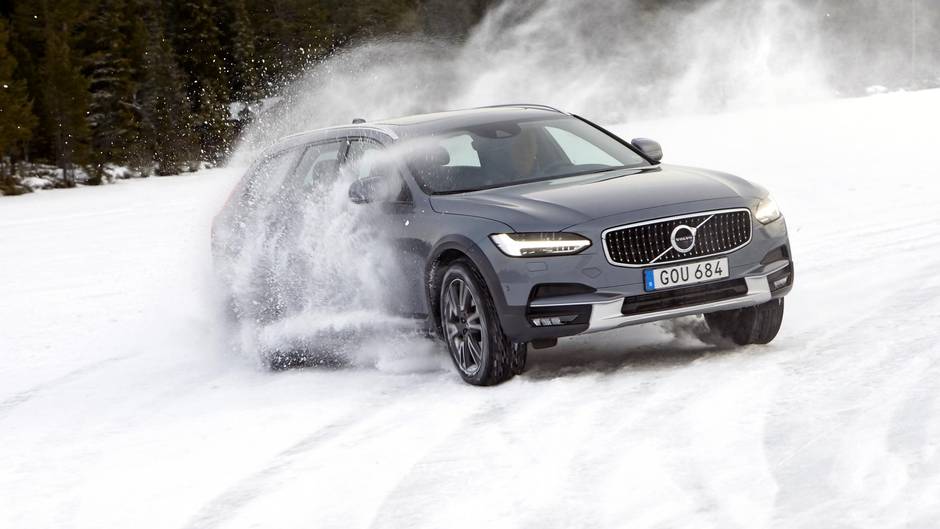 Thomas Ingenlath is in a better position to see what makes Scandinavia tick than most. He’s from Germany but moved to Volvo’s headquarters in Gothenburg, Sweden, in 2012 after becoming vice-president of design. He is responsible for making Volvos feel Scandinavian.

“If your children join a soccer club in Sweden, up to age 13 it’s not allowed to announce the winner of a match. They’re not counting the goals,” he says. One day, Ingenlath’s family went on holiday with friends from Germany. One of the little German boys had a tantrum during a casual game of soccer.

“My wife says, ‘Oh come on, it’s not so bad, it’s not all about winning, it’s just to have fun.’ I mean, us, already so Swedish! And this little boy said, ‘But I have fun when I’m winning!’” Ingenlath laughed. “And that’s exactly the culture difference.”

But how do you translate that into the shape of a car, a roofline, a bumper? Volvo’s intention – and the intention of its new parent company, Geely – is to turn the brand into Sweden’s answer to Audi, BMW and Mercedes-Benz. To do that, they’ll need to not only make excellent luxury cars, but also to offer something unique, a reason to buy a Volvo over a German car. Scandinavian design, a Scandinavian sensibility, is what Volvo is really selling. 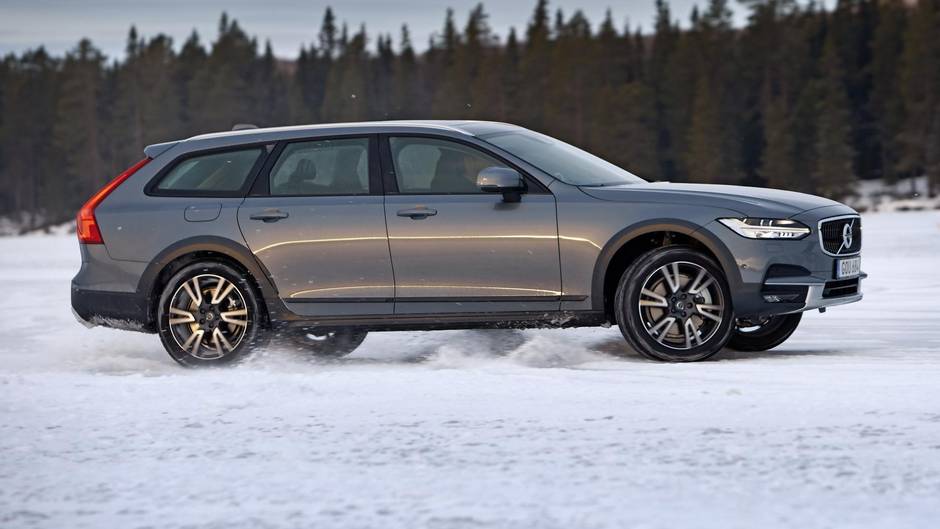 On a frozen lake near Are, a ski resort about 600 kilometres north of Stockholm, Volvo’s V90 CrossCountry slides gracefully sideways across the ice, drifting around a 180-degree corner, studded tires, scratching for grip, making a noise like TV static. A cloud of snow follows in its wake. It’s a mid-size car, as big as a Mercedes E-Class wagon. Not since the Concord has such a big thing moved so gracefully. The all-wheel-drive CrossCountry costs $61,900, a figure that can climb to nearly $100,000 if you tick all the options.

The new V90 CrossCountry is a ruggedized version of Volvo’s lovely V90 wagon, which the company hopes will lure buyers away from SUVs and draw back the once-Volvo faithful, those nostalgic for the firm’s old station wagons. 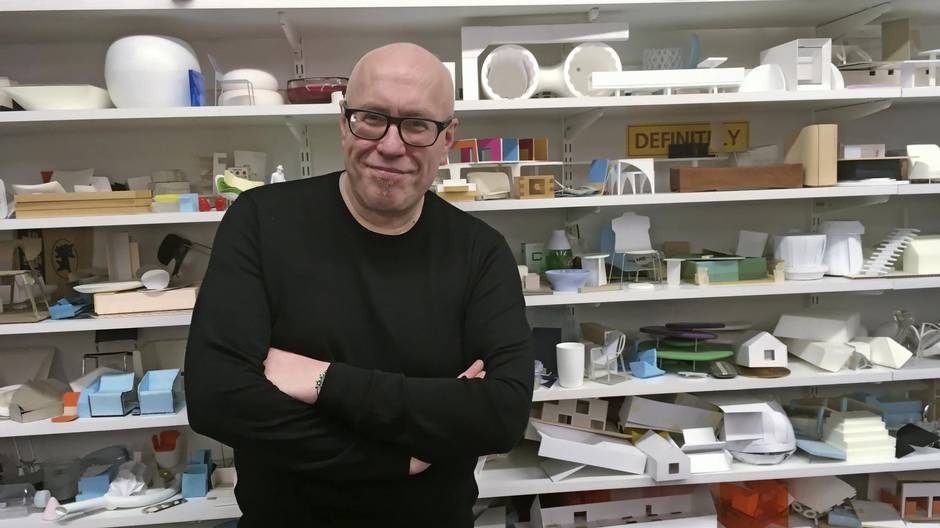 But what is Scandinavian design and craftsmanship exactly? And, does the car have any?

“It’s super important to understand that this part of the world was very poor, very unlike Europe,” says Eero Koivisto, one-third of the Stockholm-based architecture and design firm Claesson Koivisto Rune. Swedish castles imported the French and German styles doing “kind of a peasant version of it,” Koivisto says. It was called the Gustavian style. “There were wooden floors and not so much gold on the furniture, not so many exquisite details, simpler but with the same lines.”

“Swedish iron ores and newsprint, Swedish ball bearings and automobiles, Swedish furniture and freighters provided the impetus for the country’s emergence as a rich industrial nation. On the surplus generated by its export industries, the welfare state was built,” Robert L. Heilbroner wrote in a 1980 issue of The New York Review of Books.

“Because the step was so fast from being a poor country to wealthy country, it’s always been considered kind of bad taste to flash your money in Nordic countries,” Koivisto says. “Real estate agents in Sweden always have two cars. They have one which is a BMW or Mercedes-Benz or Porsche, and then they have a car like that” – he points at a Volkswagen parked outside – “to meet clients.”

Volvo’s new design direction isn’t as aggressive as its rivals. The V90 doesn’t have angry lines or sharp creases. The headlights don’t scowl at other cars. The V90’s sheer scale and proportions are enough to make it feel luxurious.

But the Swedish flags on the seats?

“It’s not really considered cool to be nationalistic in Sweden. I would take an X-ACTO knife and cut it away if it was my car,” Koivisto says.

“When I sit in a Volvo, I can actually see some things coming from Audi,” he says. “They’re very analytical. … Things like brushed aluminum I don’t particularly like, to be honest.”

This critique makes sense. Ingenlath started his career at Audi and, before joining Volvo, worked as VW Group’s director of design.

The first Volvo concept cars unveiled under Ingenlath’s leadership had a more distinct Scandinavian style. Of course, concept cars can be more adventurous, but the cross-hatched fabric seats and wood-covered floors and pops of colour on the 2014 Concept Estate all seem like things that could have made it to production. 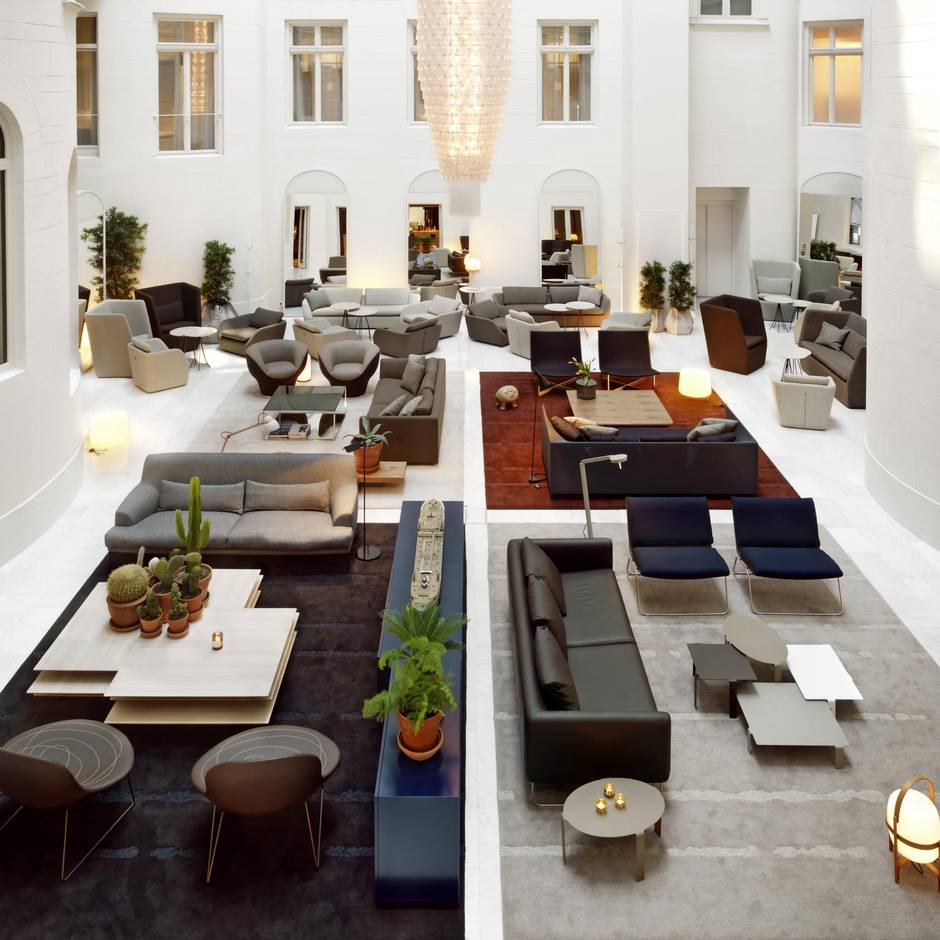 The lounge of the Nobis Hotel is as clear a definition as any of what modern Scandinavian design looks like. The lounge is in the interior courtyard of a late-19th-century building in downtown Stockholm. The courtyard is six storeys high, topped with glass letting the cold blue winter light filter down into the lounge. The floor is marble, the walls off-white plaster with all original mouldings. The sofas, chairs and tables are carefully mismatched, as if collected piece-by-piece over time, like in a home. It’s messy, eccentric minimalism. A column of light from a 20-foot chandelier casts a warm glow on the lower half of the room. There are people on laptops, people meeting over coffee. It’s quiet. They’re dressed neatly in various shades of black. It’s almost too pretty to enter but, once inside, you don’t want to leave. Claesson Koivisto Rune did the architecture and interior-design work.

Leaving that hotel in downtown Stockholm and getting into the V90 CrossCountry, I think I’m imagining it when I find the cabin has an airy, openness reminiscent of the lounge. The car’s long roof is all glass; the side windows are tall.

In Sweden, Ingenlath says, “nature has such a difference between how hostile it is in winter and how inviting and open and nice it is in summer. This kind of duality has a very strong effect on you when you live there.” 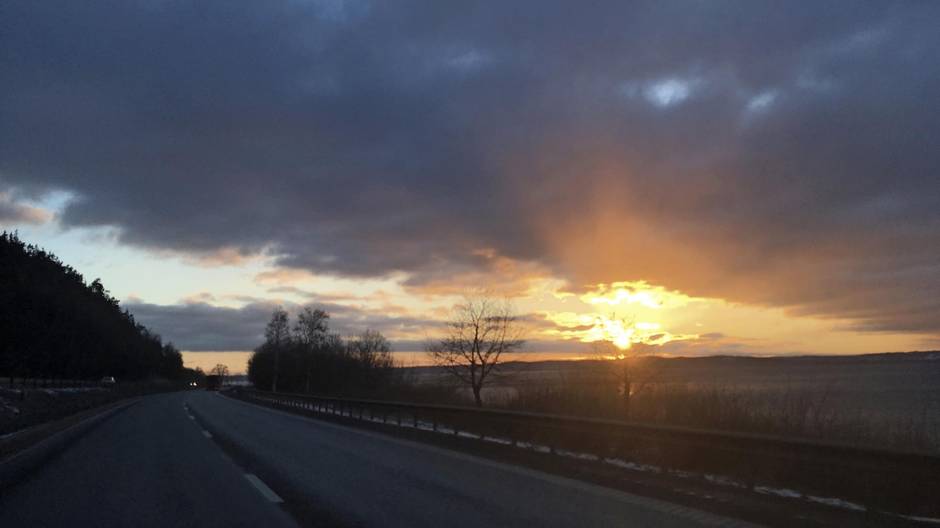 Driving west across Sweden in the middle of winter, the scenery is not unlike Ontario cottage country, with the road cutting through huge rolling rocks that have been blasted out of the way. Everything is cast in orange light before the sun goes down. It is genuinely beautiful.

Is it a stretch to tie the hygge-loving, uniquely stylish, consensus-building Swedish society to the way a car feels? Probably.

If a German car only has fun when it’s winning, a Swedish one enjoys the game. Volvo’s particular brand of luxury is cleaner, simpler, than its rivals, more in keeping with the Swedish preference for less-ostentatious finery. It’s not quite the difference between the Gustavian style and Louis XIV’s, but it’s along the same lines.

There is, however, only some truth in this “Scandinavian design and craftsmanship” marketing. Volvo could have pushed the Scandinavian style much further. The 2014 Volvo Concept Estate shows you what that could have looked like. 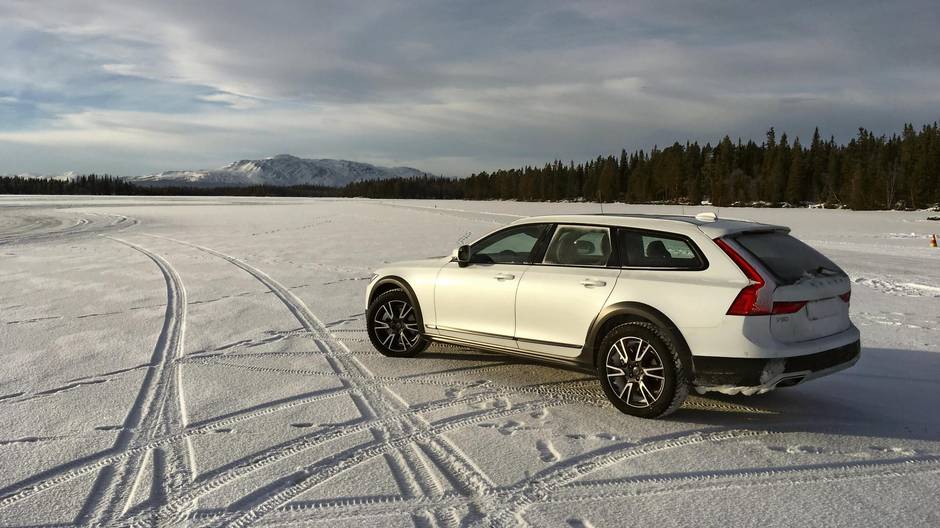 Niklas Ekstedt is thinking about buying a new car. The Michelin-starred restaurant that bears his name in Stockholm serves New Nordic Cuisine, as made famous by Noma in Copenhagen, but with a difference. At Ekstedt’s flagship restaurant, it’s about how you cook. Nearly every dish is cooked over an open wood fire in a cast-iron pan or smoked in the kitchen, just like his parents and grandparents did when he was a child in northern Sweden.

“The Chinese bought Volvo and are turning it around. The Americans bought Saab and put it down the … drain and it went bankrupt. That whole community of Trollhattan [Saab’s old home] is still devastated, still suffering from that.”

Can any car rightly claim to be German or Swedish or anything any more? It’s not like they’re made with locally sourced organic produce. Cars are hyperglobalized products. The V90 CrossCountry is assembled in Sweden. Some S90 models are assembled in China. Future models will be assembled at a new factory in the United States.

“A car is not Swedish to start off with, not rooted in tradition here,” Ekstedt says. “Audi and BMW have looked to Nordic design. The new Audis don’t look very German. Everyone is borrowing.”

It doesn’t matter that Volvo is backed by a Chinese company. With cars, it’s not how you cook – it’s what you cook. And what Volvo has managed – through both design and marketing – to cook up here is a genuine luxury car with hints of Scandinavia style. It’ll do well. 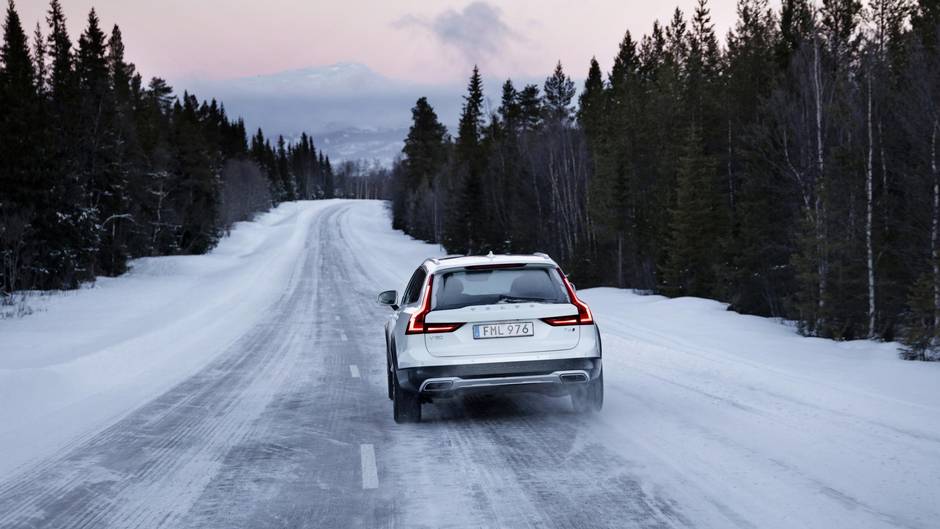