Here is the most important truth about the car business: it ain't rocket science.

Any car company aiming to make money must sell passion and emotion. Those that don't are doomed to mediocrity or irrelevance.

This is why the first-generation Nissan Murano, launched in 2002 as a 2003 model, mattered so much and remains critical today as the 2015 version arrives.

Fifteen years after emerging from near-bankruptcy, Nissan's leadership remembers the days of mediocrity and irrelevance. That was Nissan in 1999 when Carlos Ghosn arrived from Paris as the leader of the Nissan-Renault rescue team, whose task it was to reinvent the company.

The problem Nissan faced, as Alfonso Albaisa puts it, was that Nissan was "delivering bland cars to the American public and they were rejecting them." The 1999 Infiniti G20 was a particularly dowdy design, but hardly unique to Nissan Motor. The company sold plenty of dogs.

The hard truth is that the marketplace has no tolerance for designs that don't work, that don't resonate, that don't stir buyers to pull the purchase trigger. Almost nothing Nissan design produced 15 years ago was memorable.

Which is why in his quest to turn Nissan from a debt-ridden basket case into a profit-spinning automotive powerhouse, Ghosn wasted no time sending out headhunters to find Shiro Nakamura, then the head of design at Isuzu.

Ghosn made Nakamura a vice-president and gave him independence from the head of engineering, unheard of at Nissan back then. As Ghosn put it in his book Shift: Inside Nissan's Historic Revival, he had to cut the "umbilical cord" between design and engineering. Despite the humiliation inside Nissan of seeing an "outsider" head up design, Ghosn gave Nakamura the freedom to push, to make Nissan a styling leader among mass-market brands.

That first Murano resonates with the GT-R, Infiniti FX and the first G35, Q50, Cube, the Leaf electric vehicle, the Juke and the 370Z. Spectacular or at least shocking, every one.

Nissan today wants its newest Murano to revisit the glory of its first – a ground-breaking cross-over with a massive glass greenhouse (for stupendous visibility) and a fuel-saving continuously variable transmission.

As Nissan Canada's senior product planner, Bert Brooks, says: "We really want to reset the product and take it back to what the first-gen stood for – a breakthrough product." That Murano was the first Nissan to get the full Nakamura touch, from its curvy backside to its bold front end, to the utter lack of straight lines.

Still, the Murano has not been a chart-busting bestseller. Annual sales have stayed in the 4,000-5,000 range in a segment of intermediate sport-utility vehicles, where the most popular models find 15,000-30,000 buyers or thereabouts.

"We want to move [the 2015 Murano] away from being a niche player," Brooks says. "We want to make it more a volume player."

Really? Ground-breaking styling is often polarizing. You love it or hate it. Nakamura, a soft-spoken, bespectacled designer who plays the jazz bass and dresses in grey and black, believes the latest Murano design, as he told Automotive News, will not only recapture the "shock of the new," but also "remind people that Nissan is bold and exciting."

This Murano is handsome and clearly reflects the latest Nissan design language. Nissan types say the side view creates an energetic, flowing feel, while the "boomerang" rear lamp design is dynamic and sharp. It has presence, right down to wheels that fill up the arches to within millimetres. But given the rumours swirling that Nakamura, at 64, is closing in on retirement, is this the "legacy" design for which Nakamura wants to be remembered? Or is there something else coming?

Bet on something else, something even more bold from the design house Nakamura built.

Deck the malls with frustrated parkers
May 12, 2018 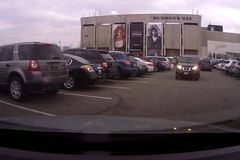 Scary leap of faith paying off for one of Canada's first Toyota dealers
May 12, 2018 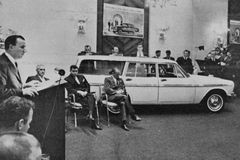 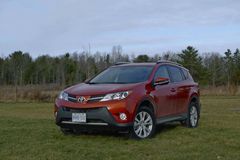 Review
2014 will go down as the year of the sports car
June 5, 2017
Gifts for the car buff who has everything
June 5, 2017
Follow Jeremy Cato on Twitter @catocarguy
Report an error Editorial code of conduct
Due to technical reasons, we have temporarily removed commenting from our articles. We hope to have this fixed soon. Thank you for your patience. If you are looking to give feedback on our new site, please send it along to feedback@globeandmail.com. If you want to write a letter to the editor, please forward to letters@globeandmail.com.
Comments