With the launch of the Stelvio crossover and the Giulia sport sedan, Alfa-Romeo is back in a big way. Even with a host of luxury brands on the table already, this is good news for drivers as Alfas always seem to have something special tucked away beneath their sheetmetal: When first we saw Dustin Hoffman’s red Spider Duetto crossing the Golden Gate bridge in The Graduate, we knew it was a sensual slice of la dolce vita. To get a better idea of the essence of Alfa-Romeo, we polled some Alfisti to find out which were the greatest ones ever made.

“For me, it’s the Tipo 33 Stradale,” Ralph Gilles replies without hesitation. The Montreal-born head of Fiat Chrysler Automobiles’ global design department speaks from the heart. “It’s the sensuality of it. I can’t walk by that car without stopping to admire the styling.” 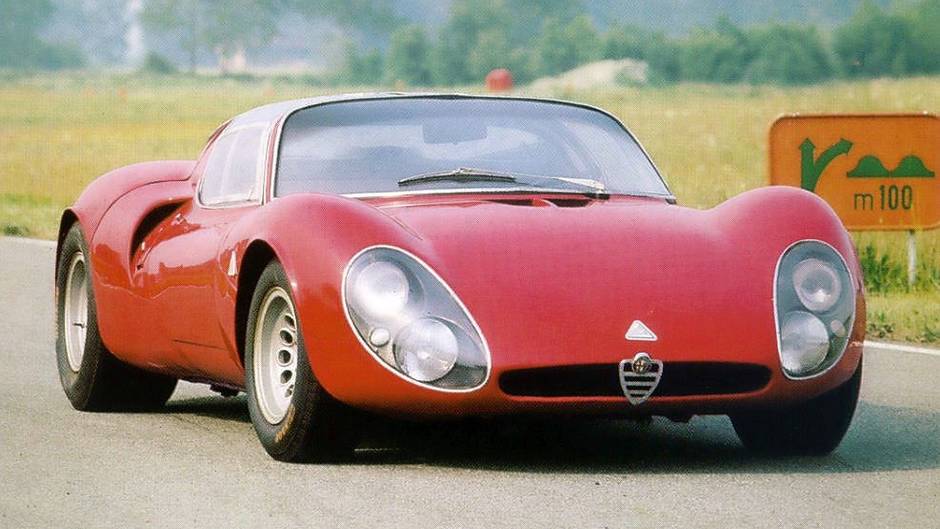 The Stradale is a great choice. Based on the Tipo 33 racing machine, it’s a hand-built masterpiece. Power comes from a mid-engined 2.0-litre V-8, which revs to a staggering 10,000 rpm. The racing version did well in its class, but the street car is the real heart-stopper, perhaps the only machine that can make a Lamborghini Miura look reserved.

Seeking to bathe in the halo from this heritage, FCA brought a 1968 33 Stradale to last year’s Los Angeles Auto Show. While manufacturers spoke of the electric future, Alfa-Romeo fired up that screamer of a V-8 and revved it up. A typically Italian thing to do.

However, the Stradale is also extremely rare and valuable to the point that you only might ever see one onstage at a show. Gilles has another pick. “On the more accessible side,” he says, “there’s the GTV. I have one, a 1969; it’s a car I’ve loved since I was a kid. It’s actually my second one: I made a half-joking offer on it and the owner accepted. My wife was only 50 feet away. I had, as they say, some ’splaining to do.”

The Gran Turismo Veloce version of the 105/115 series Alfa-Romeo coupes are stunning machines. Penned by Giorgetto Giugiaro in his first years at the Bertone design studio, it is a fierce little 2+2 with a revvy twin-cam engine. Prices are on the rise, but it’s still in the realm of affordability.

However, this is a quest for the greatest Alfas, not just in beauty, but in speed. For the latter, you’d be hard-pressed to match the ill-fated 164 Procar. From the outside, it looked like a standard 1980s Alfa-Romeo sedan. However, the performance was insane: 0-100 km/h in two seconds and a top speed above 350 km/h. 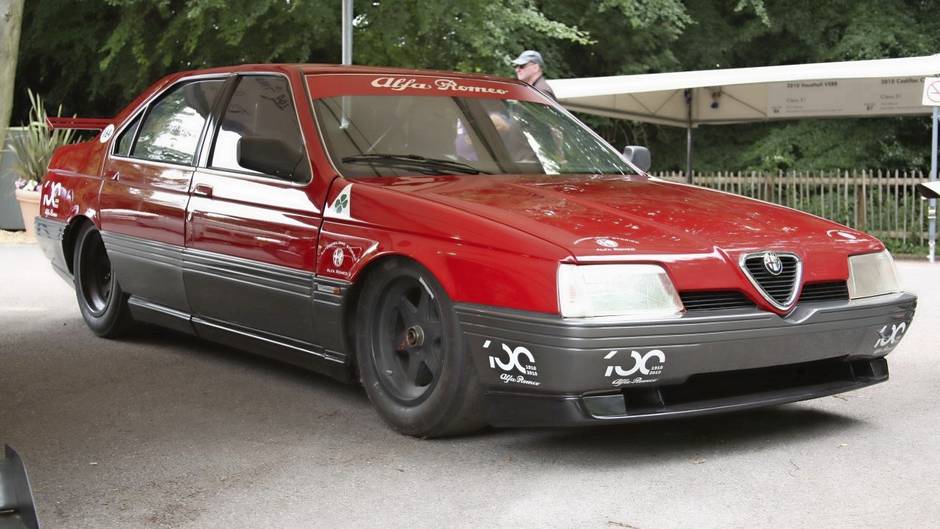 The reason the Procar could outrun Formula One cars of its era was because it was essentially a F1 car with less downforce. Underneath a removable carbon and Kevlar composite body was a 3.5-litre, 620-horsepower V-10 mounted amidships, massively fat racing slicks and an aluminium racing chassis. Regrettably, its intended racing series never came to light, so the 164 Procar never turned a wheel in anger.

A little madness should be baked into every Alfa, as well as sensuality, but the Procar is more an evolutionary dead-end than a truly great car. Let’s wind the clock back a little.

Our next Alfa is the first choice of both a Pebble Beach judge and a mechanic who brings prewar machinery back to concours-winning elegance. Nigel Matthews is our judge, a long-time expert on classic machinery and a former bodyman with plenty of experience working on Italian machinery. Rob Fram is our mechanic, one of the three artisans at RX Autoworks, a restoration company with trophies from Pebble Beach and Villa d’Este in Italy.

“For my Concours interests, it would be a 1938 Alfa Romeo 8C 2900 Berlinetta,” Matthews says. “The amazing detuned Vittorio Jano supercharged straight eight-cylinder engine is an absolute masterpiece, both visually and to the ear.” 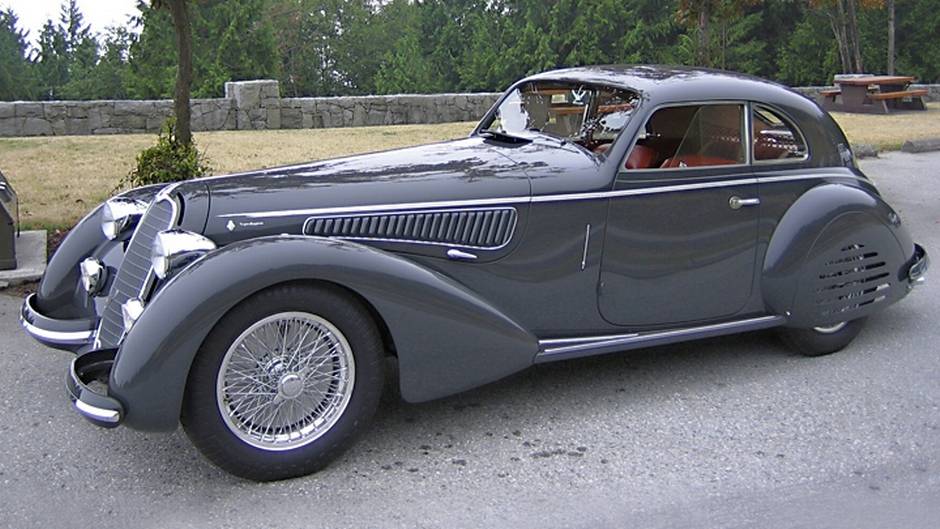 The 8c is just about perfect. It’s unutterably beautiful, advanced and powerful, yet, also graceful. It’s the kind of car that could rip off demonstration laps around the circuit at Monaco, then spend the weekend on a plinth in the Louvre. 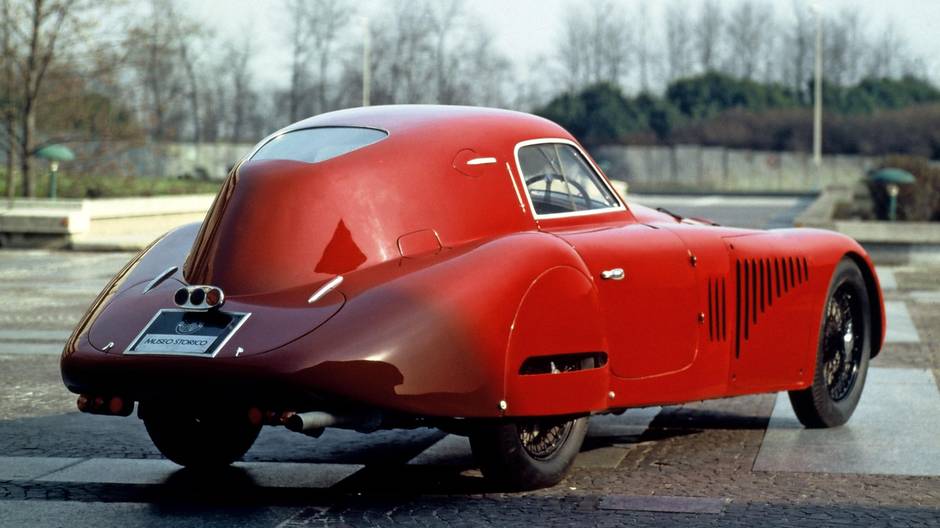 Fram and Matthews have a couple of backup choices, too, both from 1965: a Giulia TZ2, and a Giulia GTA. The former is a sort of 7/8ths scale Ferrari 250GTO, the latter is an alloy-bodied version of the GTV. Both would excel in vintage racing.

And it is to vintage racing we are to look if we can find one Alfa-Romeo to stand above the rest. Its importance may not be apparent immediately, as it’s an elderly-looking machine, neither as advanced as the 8c, nor as swooping as the 33 Stradale.

It’s the Alfa-Romeo P3, specifically the car used by Tazio Nuvolari in the 1935 German Grand Prix. Hugely outgunned by the vastly more powerful and advanced German Silver Arrows racing team (state-funded as a propaganda tool of the Nazis), it roared to victory in the final lap, stunning hundreds of thousands of onlookers – including the ruling elite of the Third Reich. 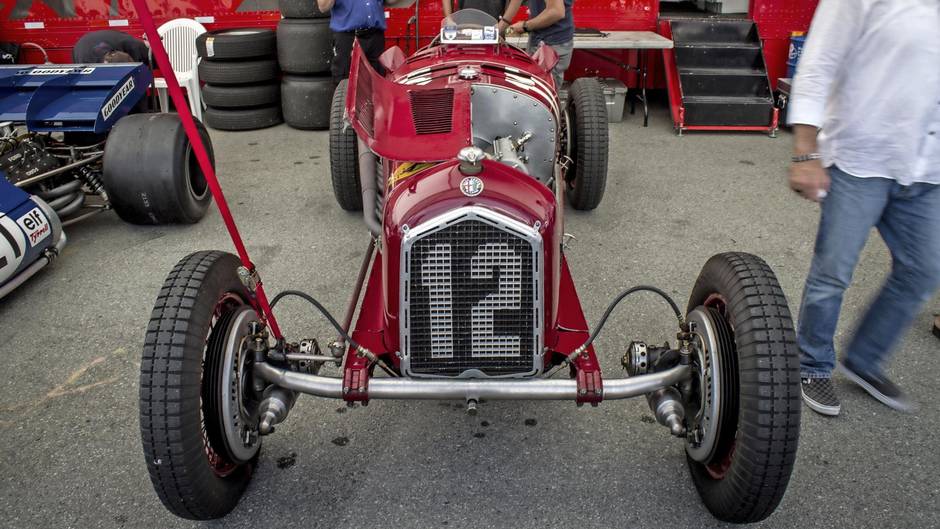 The Alfa Romeo P3 used by Tazio Nuvolari to win the 1935 German Grand Prix is on display at the Monterey Historic races in 2015. (Brendan McAleer)

I called up my friend, Sam Smith of Road & Track, who drove the car on track this spring.

“Set aside the machine,” he said. “What it does, what it looks like. That’s one of the few cars on earth where the emotion and romance intersect with an almost universal moment in history. A kind of triumph of romanticism and good over an onslaught of technology. You can almost smell it in the leather, breathe it in the oil. That car, the moment it represents, all of it – it’s just a weird, rare kind of magic.”

This is where we find what makes Alfa-Romeo special. It’s not in the performance or the styling, not in performance figures or auction prices. It’s in the humanity you can see, the bravery and triumph and optimism of those who built and raced them.

It’ll be hard to translate that ephemeral quality into modern concepts such as crossovers and sales results, but the return of Alfa-Romeo comes with hope for the future. The Giulia was designed and brought to market in a short period of time and it arrives with a few fingerprints still visible. It has flaws. It’s not entirely polished. Nuvolari probably would have loved it.