The Exocycle is a self-driving motorcycle with an enclosed cockpit, built so it can be used year round. Two electromagnetic tracks run around the vehicle’s exoskeleton to propel it and instead of sitting 'on the bike', you sit inside its frame. The Exocycle can also be paired to ride in a ‘pack’ containing up to six vehicles. 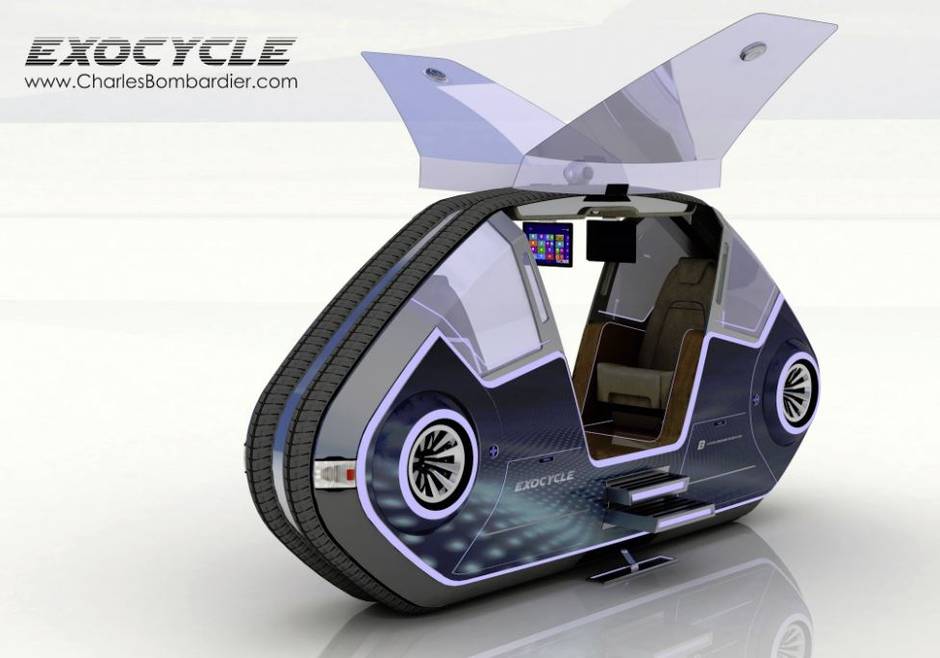 With a narrow width, motorcycles take less space on the street, and they consume less energy compared to most cars. However, riding one in the rain or during winter makes them less attractive. In 1982, I saw the cult movie TRON and since then, I’ve always wanted to build and ride an enclosed vehicle similar to the famous TRON light cycles. Imagine if you could commute to work in a self-driving bike without getting wet, cold or having to wear protective gear. To shape this concept into a form, I teamed up with Adolfo Esquivel and we came up with an interesting (and challenging) design. 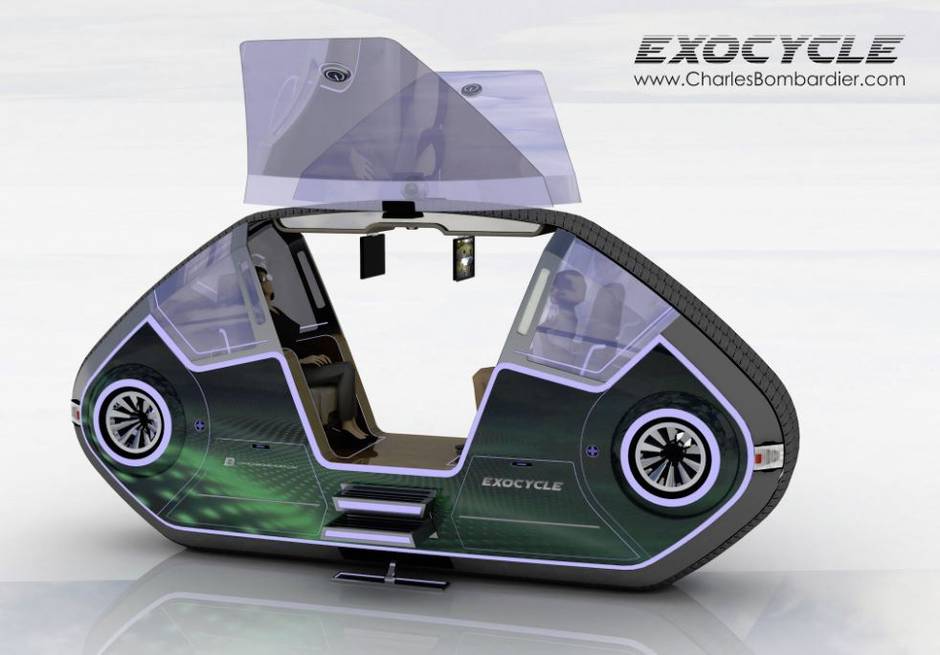 Each Exocycle would contain a magnetic levitation system designed to move its twin rubber tracks around its exoskeleton. The guide for the tracks would form the frame and magnets would create the lift and propulsion necessary to displace the rubber tracks and propel the Exocycle (see Maglev train). Each track would be able to move and accelerate at a different speed to change the direction of the vehicle. If this system seems complicated, simply picture it with two 30 kW liquid-cooled electric motors that each propel a high-velocity track. 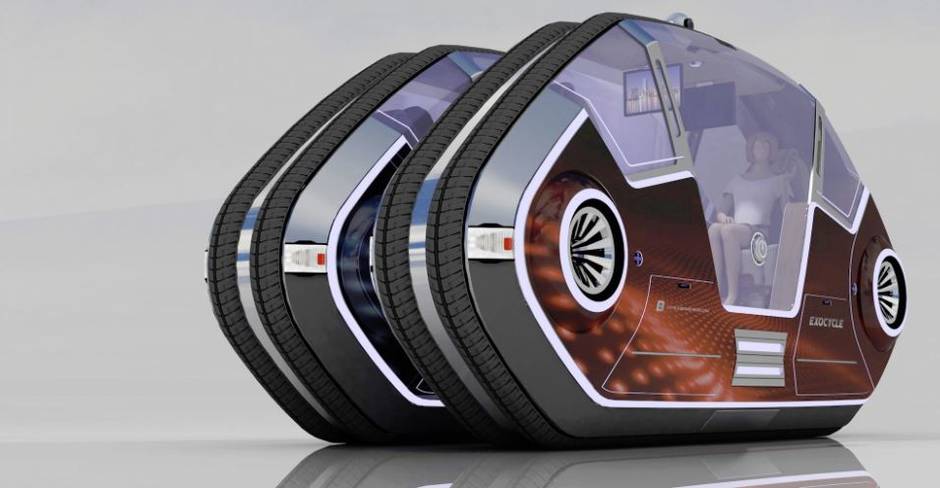 An automated drive by wire system would control the power and servo direction on each track. Two internal gyroscopes would keep the bike balanced and help steer it in the desired direction. The rubber tracks would also have the possibility to rise under the bike on either side to create a shift that would tilt the bike left and right.

To ride in a ‘pack’, the Exocycle will work similarly as the Splitcycle concept. First the pilot needs to authorize the manoeuvre, and then, the units will automatically position themselves side by side and lock together using coupling points. When the ‘cycles’ are united, one vehicle will control the group. You will be able to authorize a control transfer to another pilot by using the touch screen interface located on each unit or a smartphone connected to the motorcycle’s electronic modules. 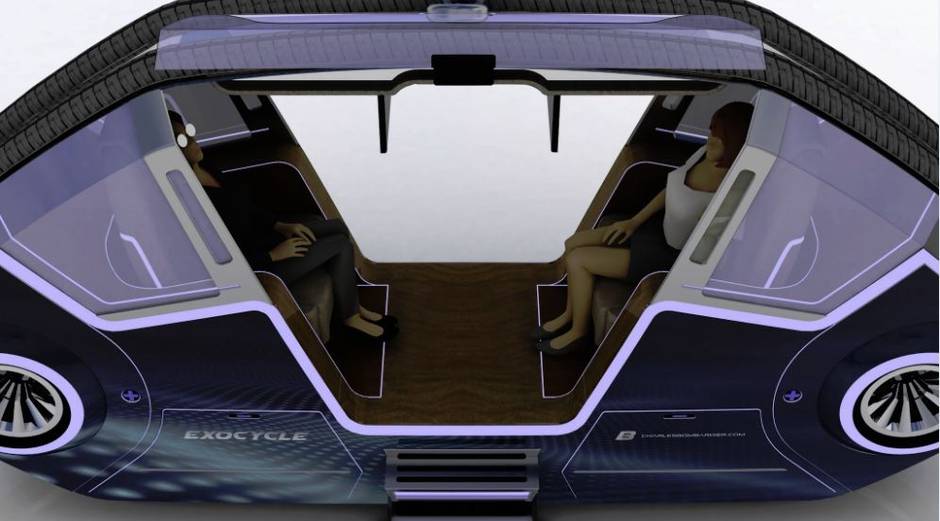 The Exocycle is meant to replace cars in cities where space is always important. By developing a narrow enclosed vehicle like the Exocycle, sidewalks could be widened and stores and restaurants could use the extra space for customers and pedestrians. The Exocycle could still be used to zip you across town without having to maintain a 25-foot wide street.

I would like to thank Adolfo Esquivel for the incredible renderings of the Exocyle. Esquivel earned an Industrial design degree from Colombia and completed a postgraduate study on Events Design at the UQAM of Montreal. He currently works as a Senior Industrial Designer for Geyco Design. He also created the design of the Pinball theme park and the Sea-Bull wake surf boat concept. 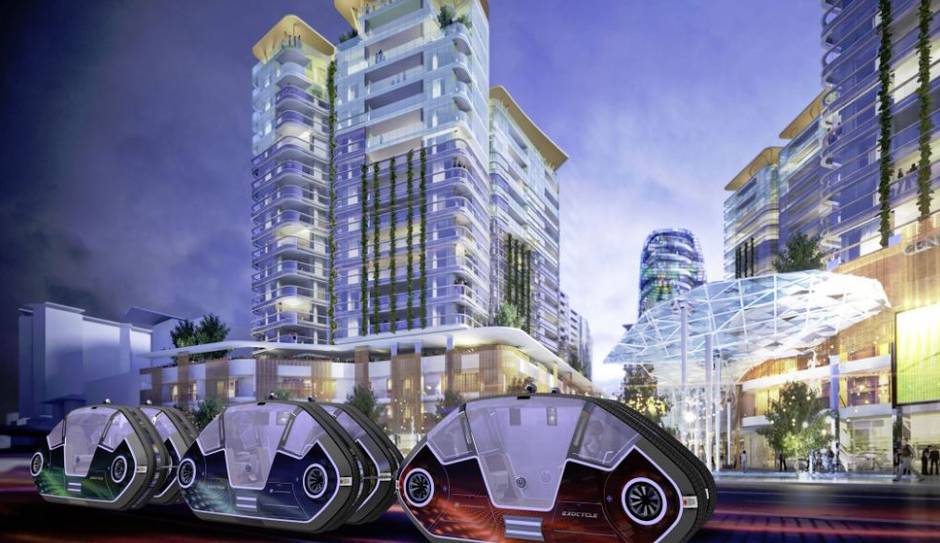